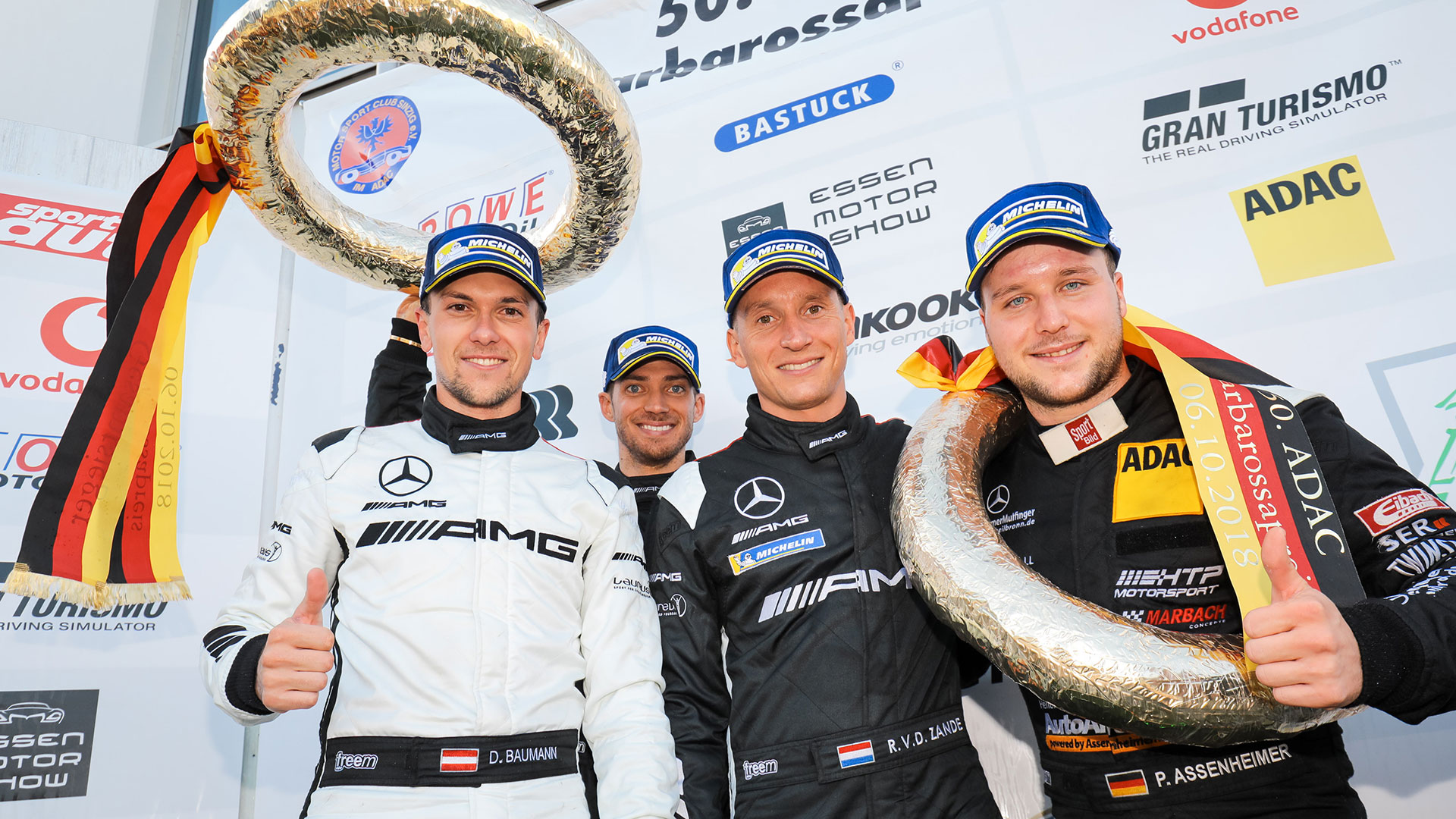 Loud cheers on the podium: The Team AutoArena Motorsport celebrated their first VLN win at the 50thADAC Barbarossapreis. After 28 race laps, Patrick Assenheimer and Dominik Baumann crossed the finish line as the winners with the slight advantage of 3.651 seconds. For both drivers, this was likewise their first victory in the VLN. The Team SPS automotive performance narrowly missed the sensation at their VLN debut. Edoardo Mortara and Renger van der Zande had been in the race lead with their Mercedes-AMG GT3 over a long distance. The finally lost the victory due to a small error. Third place in this eighth race of the season went to Jonathan Hirschi, Jordan Tresson and Hunter Abbott in a BMW M6 GT3 of Walkenhorst Motorsport.

Patrick Assenheimer has been competing in the VLN for eight years. The 26-years old made his debut in 2011 in class V4 with a Mercedes-Benz C-class. Until 2016, he was competing against the BMW armada in the class of production cars where he took three class wins. His 56thVLN race now finished with his first overall victory. “Unbelievable”, he said after the race with a big smile in his face. “To be finally on top of the podium, that was a superb feeling – awesome.” The fight between the two Mercedes-AMG GT3 in the closing stage of the race was absolutely thrilling. The rookies of SPS were leading the race over long distances but then made an error which was small but had serious consequences. At their last pit stop, the team failed to comply with the minimum stopping time by only 0.9 seconds but which resulted in a 36-second time penalty. “We would have been happy even with second position”, said Assenheimer who thus gave proof of his sportsmanship. “But we are of course happy to accept the win.” Despite their bitter defeat, Mortara was not unhappy: “SPS has done a brilliant job and showed a really strong performance. For me, it was an exciting and fantastic weekend. We were pushing so hard in the last laps as we really wanted to take the victory. It was unfortunately not enough in the end.”

Behind the top three, two future GT3 cars demonstrated their performance and power in an impressive way. Maxime Martin and Darren Turner finished fourth at their debut with the Aston Martin Vantage GT3. Only one position down finished Christopher Haase and Jamie Green with the new Audi R8 LMS. This had also been the order of the two cars in the results of the qualifying – positions one and two. Both cars do not yet have their final homologation in class GT3 so they had to start in class SPX. Pursuant to the regulations for such test participations, these vehicles must take the start from the last position/s of the first starting group and, moreover, their minimum pit stopping time is 20 seconds longer than for the other cars. The gap behind the winners for the Aston Martin was 3:59.416 minutes and for the Audi duo it came up to 4:31.365 minutes in the end. Augusto Farfus took the start from first position with the BMW M6 GT3 of Schnitzer Motorsport but the Brazilian had to stop the race after 23 laps.

The fastest SP9-Premium car was driven by Klaus Abbelen, Lance David Arnold and Felipe Fernández Laser, they finished sixth overall. The driver trio in the Frikadelli Porsche took the chequered flag 1.090 seconds behind the fifth-placed Audi. The top ten were completed by the two Audi R8 LMS of Phoenix-Racing and Car Collection Motorsport and by the two fastest Porsche 911 GT3 Cup cars of GetSpeed Performance and Kappeler Motorsport.

After the race, two technical protests were lodged and they will have an impact on the championship standings as disqualifications cannot be taken as one of those two worst results which will not be considered to draw up the final championship classification. The Pixum Team Adrenalin Motorsport lodged a protest against the winning car of Manheller Racing in class V4. The technical checks then carried out on the BMW 325i revealed an unauthorised machining of the engine bay shielding / underneath protection. This resulted in a disqualification imposed by the Stewards. Manheller Racing accepted the decision.

Manheller Racing on their part lodged a protest against the BMW 325i of Adrenalin. “When checking the admissibility of the protest, it was established that the documents had been signed by one of the two driver in an inadmissible way. Under sporting law however, only the competitor is entitled to submit such a protest. As a consequence, the protest had to be rejected as it was inadmissible”, said Andreas Witkowski, Chairman of the Stewards. The Adrenalin-BMW was nevertheless disqualified as the scrutineer had already started the technical checks involved in the protest and established an infringement of the applicable technical regulations for production cars. Adrenalin has notified its intention to appeal this decision. The results of class V4 are suspended until the final decision of the DMSB Court of Appeal will be available.

The provisional championship standings now show Norbert Fischer, Christian Konnerth and Daniel Zils in the lead, they were driving a Porsche Cayman in class V5 for the Pixum Team Adrenalin Motorsport.

The great showdown of the 2018 VLN season will take place on 20thOctober. The 43rdDMV Münsterlandpokal will run over the usual race distance of four hours.