The Nürburgring Nordschleife gleamed in white and blue on Saturday as BMW celebrated a convincing triple success with the brand new M4 GT3 at the 53rd Adenauer ADAC Rundstrecken-Trophy. Augusto Farfus from Rowe Racing and Max Hesse from the Junior Team fought a tooth-and-nail duel right down to the last few metres. In the end, the experienced Brazilian was ahead of the young German by 582 thousandths of a second. While US boy Connor De Philippi was happy about his team-mate’s last stint, Neil Verhagen and Dan Harper had no reason to be disappointed about second place after a fast drive. The podium at the third race of the Nürburgring Endurance Series (NLS) was completed by Christian Krognes, Andy Soucek and Sami-Matti Trogen of Team Walkenhorst Motorsport.

“What a great day for this new car. We have been developing it constantly. It was great to be here for the first time with the M4 GT3. I was very unlucky in my last stint with the traffic on the Nordschleife. I kind of caught every Code60 phase. Sometimes that just happens. But Augusto drove like hell and he made the decisive move to win. I’m very happy,” said De Phillippi.

For the last few years, Farfus has been professionally coaching the BMW Junior Team drivers on the legendary circuit and has obviously been providing them with perfect instructions. Now the master teacher suddenly had to withstand the strong competition of his pupils. “They learned too fast and too well,” he said with a laugh. “I was about 15 seconds behind in the last part of the race, but then I got closer and closer. At the airfield, I had only fractions of a second to decide to overtake. In the subsequent fight on the Döttinger Höhe, I knew I could trust him. But without the new asphalt, this extremely tight manoeuvre would not have been possible. Now you can push hard side by side there because the surface is like a carpet. 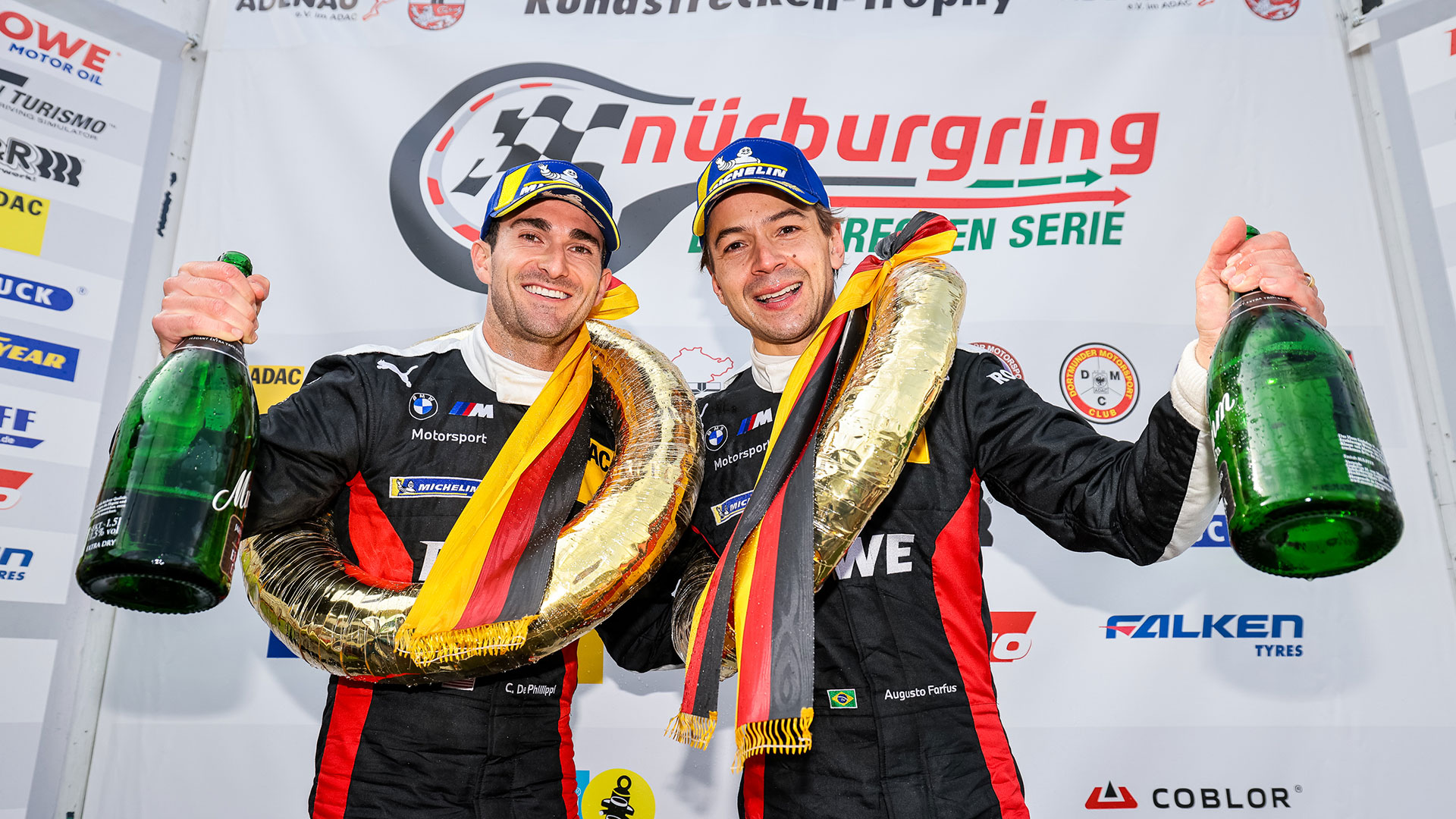 “The pupil still had to take a back seat this time. “It was very exciting in the last laps. I was unlucky when he overtook me at the airfield on the approach to the Schwedenkreuz. But then I was able to follow him closely for the next two laps. On the Döttinger Höhe we were both a bit on the grass. We can be satisfied, not to forget that we also had a drive-through penalty,” said Max Hesse, the other protagonist of the fascinating finish.

Andy Soucek also had a very special experience. The Madrid-born Walkenhorst driver was more than happy after having finished third: “That was my first stint here with a GT3 in a race. To be honest, my first and last laps were like day and night. I still have a lot to learn. However, I think I’ll be ready to go toe-to-toe with the big boys in the next race.” 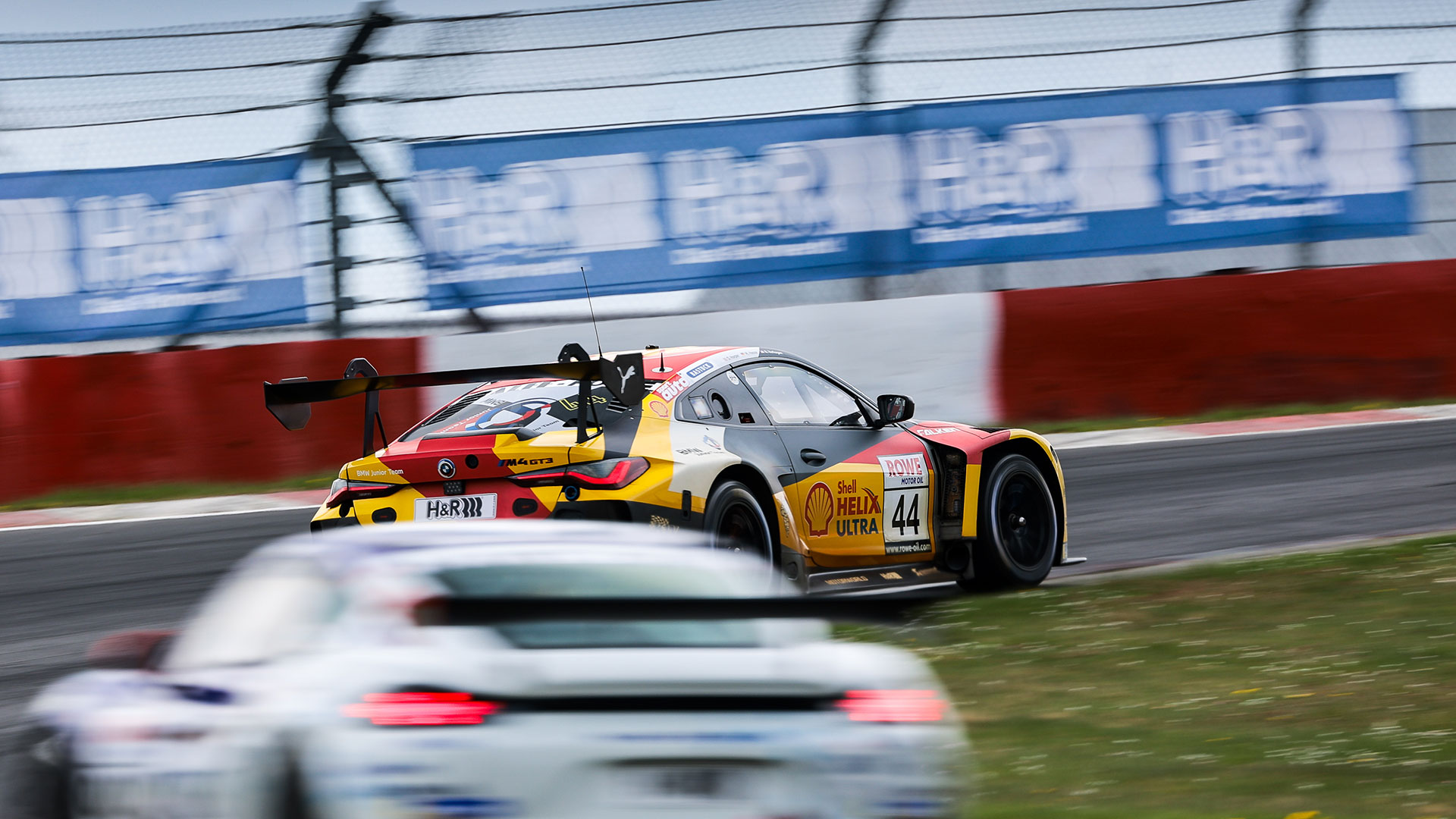 Completing the top five were Julien Andlauer, Matt Campbell and Mathieu Jaminet in the Toksport WRT Porsche 911 GT3 R. The team which is based in Quiddelbach not far from the Nürburgring even moved from 14th place after qualifying up to fourth. With the sister car from Rowe Racing driven by John Edwards, Sheldon Van Der Linde and Marco Wittmann, the fourth BMW M4 GT3 followed in the leading group.

Initially, things were a little chaotic due to numerous yellow flags when it came to determining the starting grid. Three drivers stayed under the magic eight-minute mark in this lottery during the qualifying session and all three were driving a BMW M4 GT3. Connor De Phillippi secured pole position for Rowe Racing with a time of 7:57.095 minutes. Neil Verhagen of the BMW Junior Team followed at a good distance behind with a time of 7:58.374 minutes ahead of another brand colleague. With a time of 7:58.773 minutes, Christian Krognes drove the Walkenhorst Motorsport race car to third position on the grid. This was exactly the order that would ultimately also prevail at the finish. Also remarkable was the sixth fastest time of Tim Heinemann in the KTM X-Bow GT2 of True Racing from the SP-X class.

The trio at the front quickly became a sextet. Kevin Estre pushed the Porsche 911 GT3 R from Manthey-Racing from fourth to second behind De Phillippi. Heinemann also gained one position into fifth. Neil Verhagen, on the other hand, initially dropped from second to fourth. Ben Tuck in the second Walkenhorst BMW was also within striking distance with sixth position.

The “Grello” retired early after a collision

Only 20 minutes after the start, the team mate of Jörg Müller and Mario Von Bohlen had to park his GT3 at the armco barriers after a crash at the exit of the airfield. Also unlucky was the KTM X-Bow that had started the race so furiously, before it was also thrown far back due to a puncture after a good hour with Mads Siljehaug behind the wheel. Half an hour later, it was also the end of the day for the “Grello”. Frederic Makowiecki parked the Manthey Porsche on the Döttinger Höhe after a collision with a Cayman. So the winning car of NLS1 retired early.

The race continued in a varied manner. The BMW of the Junior Team was one second below the minimum pit time. So Dan Harper had to take a stop-and-go penalty after just under two hours. The roughly 30 seconds in the pits meant the loss of the overall lead. Augusto Farfus from Team Rowe Racing thus took over first position. And in this way, the foundation was laid for the already mentioned Hitchcock thriller in the last minutes. 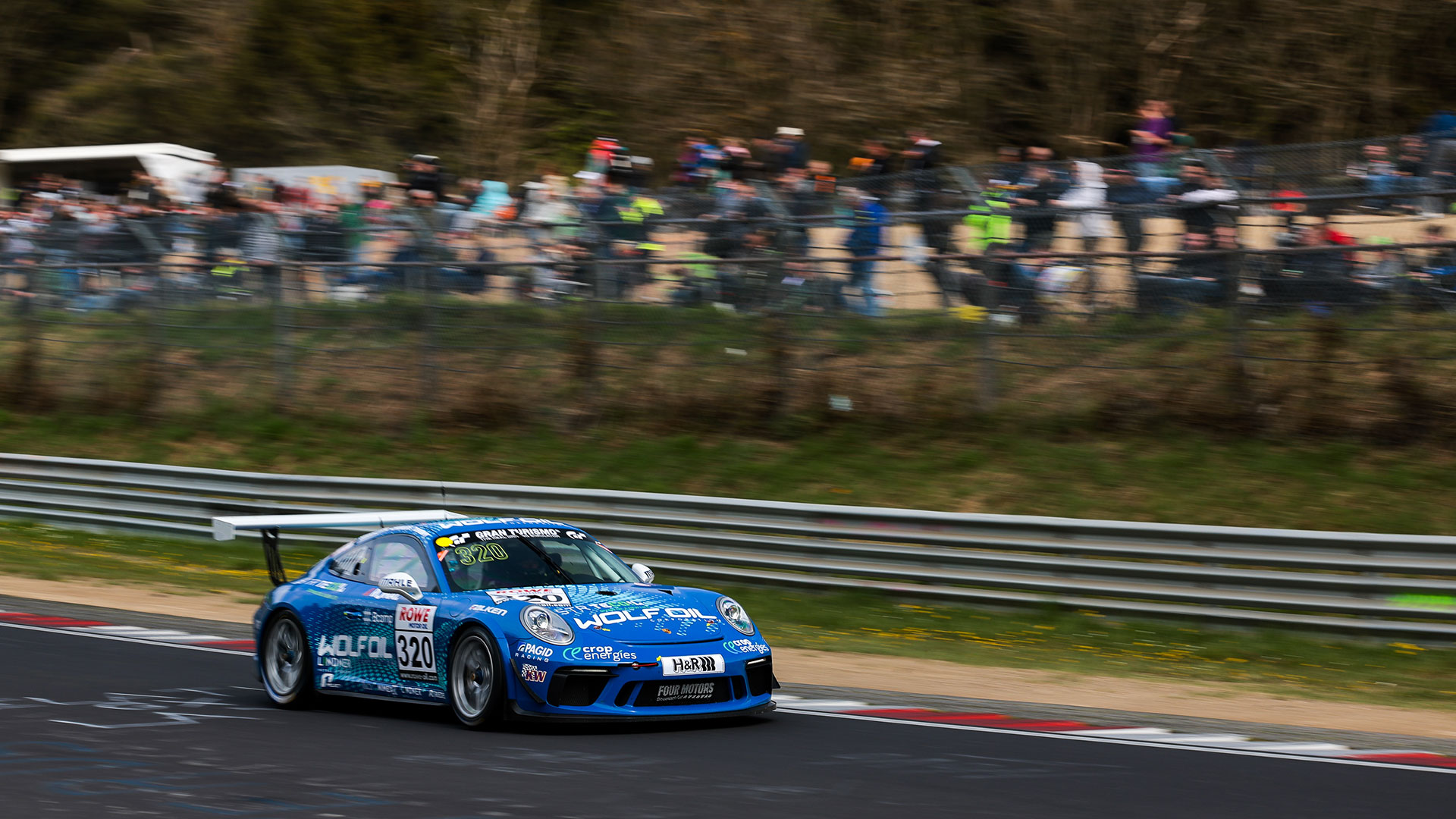 In the remaining classes, other brands were dominating. Nick Wüstenhagen and Bernhard Henzel of the Team RaceIng – Racing Engineers GmbH won in the SP9 Pro-Am with an Audi R8 LMS GT3. In the Porsche 911 GT3 Cup from Four Motors Bioconcept-Car, Smudo claimed victory in the AT class with Thomas Kiefer and Charles Kauffman. There were also interesting decisions in the Cup classes: Schnitzelalm Racing won the BMW M240i Racing Cup with drivers Carl-Friedrich Kolb, Marco Büsker and Dr Anton Hahnenkamm. The victory in the CupX went to Teichmann Racing with Stephan A Brodmerkel, Constantin Schöll and Laura Kraihamer in the KTM X-Bow GTX.

The next race of the Nürburgring Endurance Series will not take place until 25 June. The 45th RCM DMV Grenzlandrennen will run over the usual distance of four hours.