Manthey-Racing takes the victory at the VLN season opener 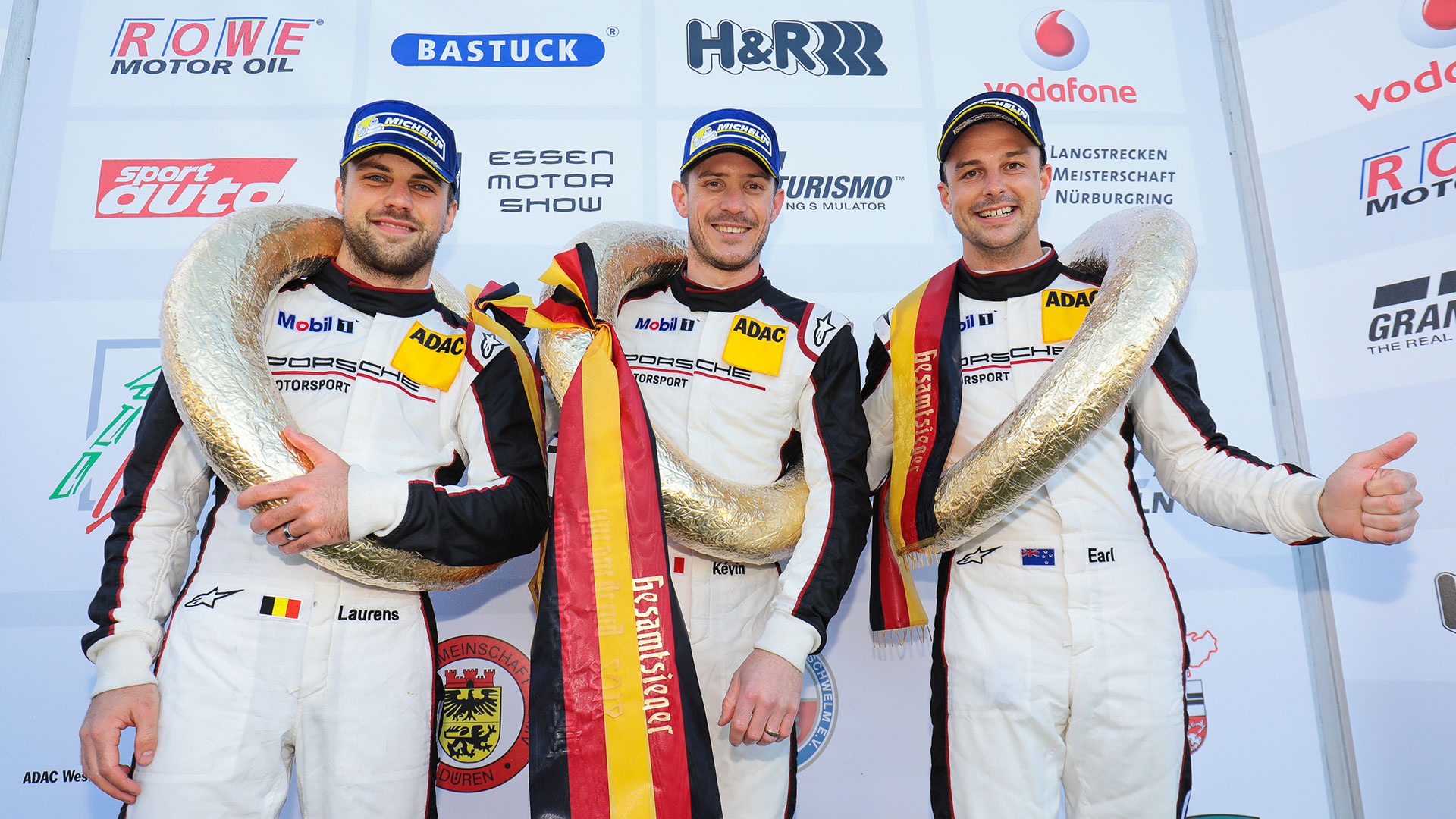 Happy faces on the top position of the prizegiving podium in bright sunshine at the Nürburgring: Kévin Estre, Earl Bamber and Laurens Vanthoor took the victory with their Porsche 911 GT3 R of Manthey-Racing at the VLN season opener. After 28 laps (4:07:04.241 hours), the advance of the driver trio ahead of the second-placed Markus Winkelhock and Nico Müller who were driving an Audi R8 LMS for the Audi Sport Team BWT was 51.838 seconds. The top three were completed by Klaus Bachler and Sven Müller in a Porsche 911.

“Fantastic, finally my very first win at the Nordschleife”, said Bamber, the happy man from New Zealand after their successful result. For Vanthoor, who set the fastest lap in practice with a time of 8:03,070 minutes, this was also a premiere. The Belgian celebrated the first Porsche victory in his career. “Finally, I have been waiting for this for more than one year. And this now moreover with ‘Grello’ in the Green Hell – terrific.” The Manthey driver trio was dominating the action over the complete race distance. “It was nevertheless not at all just an easy walk in the park,” said Estre. “The Nordschleife is a new challenge every time and you never get bored.” 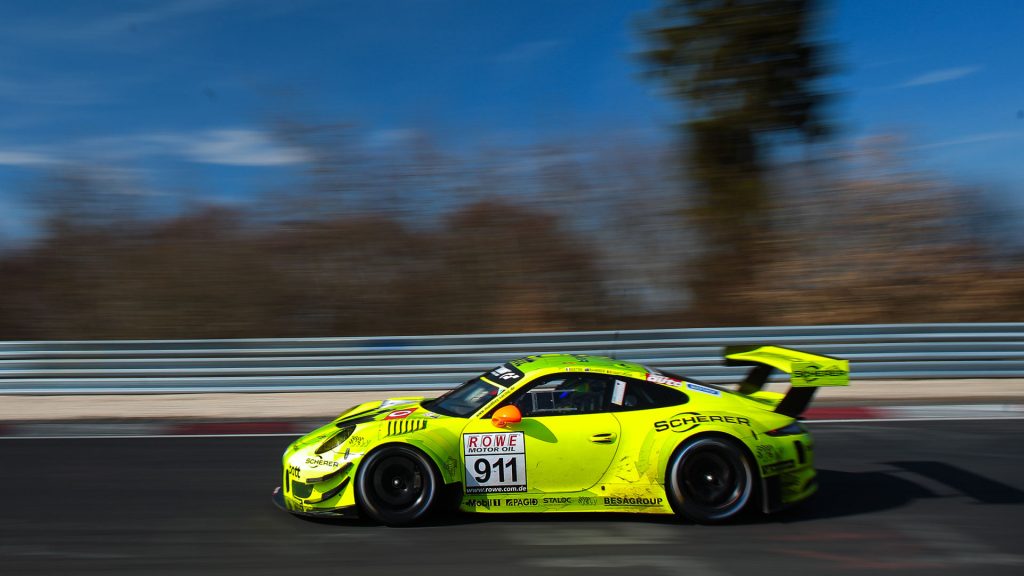 Audi works driver Müller, who is competing in the DTM for the factory from Ingolstadt, also had a good start into the racing season 2018. “This was my first time in the Mücke team and I am truly excited”, he said. “The preparation of the car was absolutely perfect and we had a very good race. The timed practice in contrast was rather difficult as we had some problems to get through the traffic.” Due to fog, the practice session of the first VLN race with 180 cars started with a delay of about 40 minutes.

The third position achieved by Bachler and Müller in the Falken-Porsche was primarily due to the brilliant strategy of the team. “We came to an early pit stop”, explained Bachler. “Afterwards, we dropped back into twelfth position but were able to catch up again with fast lap times.”

Behind the top three finished the Audi Sport Team Land Rang in fourth place and the fastest Mercedes-AMG GT3 was driven by the Mercedes-AMG Team HTP, finishing fifth. The best BMW M6 GT3 was start number 98 of ROWE-Racing. So all of the four German car manufacturers finished the race in the GT3 class in the top 10.

This year, the GT3 class SP9 is for the first time subdivided into three categories with separate classifications. The overall winners of this round were also the winners in the classification for professionals. The first winners in the new SP9 premium classification are Steve Jans and Marek Böckmann in the Porsche 911 GT3 R of the GIGASPEED Team GetSpeed Performance. “Great that it worked“, said a happy Böckmann. „That makes you striving for more and gives us hope for the next races.” Jans presented some compliments to his new permanent team mate. “Our speed was good and we were very competitive. Marek has done a fantastic job. We get along with each other very well, both on and beside the race track.” The SP9 Masters classification was dominated by Henry Walkenhorst, Rudi Adams and Andreas Ziegler in a BMW M6 GT3. 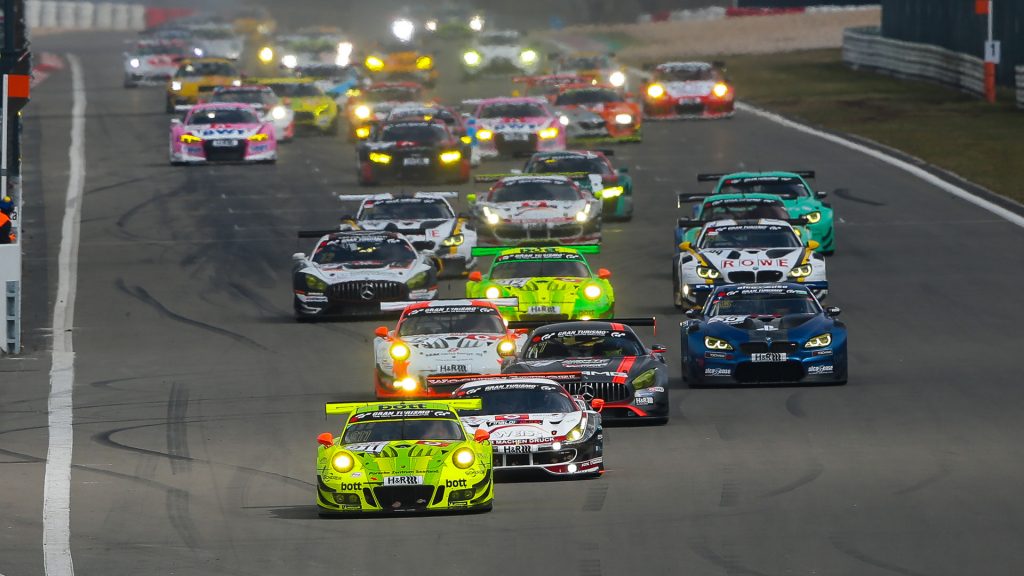 The fastest Cup Porsche was driven by Marcel Hoppe, Moritz Kranz and Tim Scheerbarth for Mühlner-Motorsport. The trophies in group H were awarded to the winners Olaf Beckmann, Peter Hass and Volker Strycek in the cult car Opel Manta. Best drivers in the VLN production car class were Norbert Fischer, Christian Konnerth and Daniel Zils with the Porsche Cayman of Pixum Team Adrenalin Motorsport.

The first leaders in the championship classification of the season 2018 are Bamber / Estre / Vanthoor. As the winners of class SP9 with 19 competitors, they scored 9.75 points for the drivers’ championship. In second position follow Yannick Fübrich and David Griessner as winners of the BMW M235i Racing Cup class (9.74 points) ahead of Carsten Knechtges and Marcel Manheller (9.71 points) who won in class V4 with the Manheller-Racing-BMW.

The second round of the VLN endurance championship Nürburgring will start on 7th April 2018. The 43rd DMV 4-Stunden-Rennen organised by the RG will run over the regular distance of four hours.