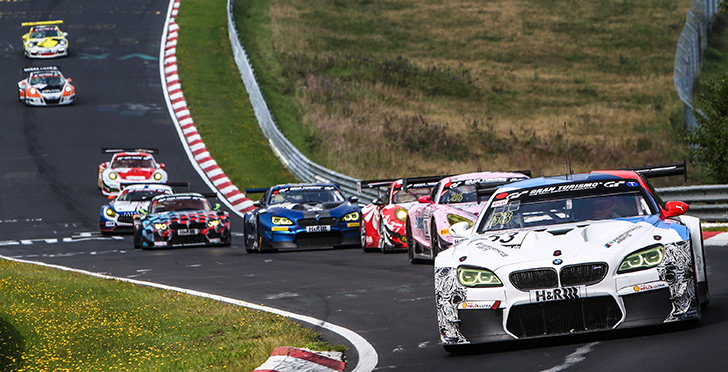 The VLN endurance championship Nürburgring goes full speed into the last third of the season. On Saturday, 23rd September, the seventh out of nine rounds in the season 2017 will run over the traditional distance of four hours on the 24.358 kilometres long combination of the Nürburgring short connection and the Nordschleife. The provisional entry list of the 57th Reinoldus-Langstreckenrennen organised by the Dortmunder MC figures the impressive number of 167 cars.

All the motorsport fans will be delighted with the top group comprising eleven GT3 cars which are supposed to decide the overall win amongst each other. After three Porsche wins in the current season, the Manthey nine eleven with start number 911, this time driven by Michael Christensen and Kévin Estre, is one of the favourites to score the victory. Frenchman Romain Dumas, who has already taken two first places in 2017 for Manthey, will compete in this seventh VLN race as a guest driver in the Porsche 911 GT3 R of Falken Motorsport, his team mate will be Martin Ragginger,

The top BMW drivers have already scored one victory at the fourth round. The two BMW M6 GT3 of Walkenhorst Motorsport will be completed by a car of Schubert Motorsport driven by Claudia Hürtgen, the VLN Champion of the year 2005, Frederik Nymark from Denmark and Anders Buchard from Norway. The stylish BMW Z4 GT3, also entered by Walkenhorst Motorsport, will be driven by Peter Posavac and Alex Lambertz.

After their early retirement at the sixth round, the motivation in the Haribo Racing Team is higher than ever. Still with no victory in 2017, the squad will be strengthened by Mario Farnbacher who is going to make his debut in the VLN as driver in a car with the “star”. He will be supported by some experts at the Nordschleife, Lance David Arnold and former DTM driver Daniel Juncadella from Spain. Another Mercedes-AMG has been entered by Black Falcon. The drivers in the local team will be Hubert Haupt, Erik Johansson and Manuel Metzger who are going to share the steering wheel. And the race car of Landgraf Motorsport, too, carries a star in the radiator grille: Klaus Landgraf, Kai Riemer, Markus and Stefan Schmickler will compete in the GT3-Gentlemen classification.

The top line-up will be completed by the Frikadelli-Pro/Am-Porsche with Sabine Schmitz, Klaus Abbelen and Andreas Ziegler as well as by the Ferrari 488 GT3 of the Wochenspiegel Team Monschau. After having skipped two races, Georg Weiss, Oliver Kainz and Jochen Krumbach who won the third round will now attack again.

Class SPX – a playground with prospects
Class SPX, too, figures spectacular race cars, above all the Renault R.S.01 of “Dieter Schmidtmann“ and Heiko Hammel the latter having won the hearts of the fans very quickly after his debut at the beginning of the year. The two regular drivers will for the second time in a row be supported by Felipe Fernandez Laser. In addition to the two Mercedes-AMG GT4 of the two test teams Black Falcon and Uwe Alzen Automotive, BMW is carrying forward the development of the 2018 M6 GT3, together with the BMW Team Schnitzer. Markus Palttala will be solo driver in this car. A view on the future will finally be provided by the first race participations of the Porsche 911 GT3 RS of Manthey-Racing as well as of the Nissan GT-R Nismo with the driver duo Tom Coronel and Michael Krumm. By the way, both cars will make their debut at the Nordschleife.

New cars also in smaller categories
More and more projects from the medium categories have meanwhile joined the worldwide biggest grassroots series at the Nordschleife. The MSC Münster will for example bring the first Porsche Cayman S in the class of VLN Specials up to 2,600cc cubic capacity with turbo to the start. It will be driven by Peter Bonk and Marco Van Ramshorst from the Netherlands. This is trend-setting as almost all the manufacturers are finally heading towards downsizing and the use of powerful turbo engines. Whilst, in the S-variant, the mid-engine sports car from Zuffenhausen had so far been fitted with a 3.4 litres normally aspirated engine, a supercharged 2.5 litres power unit is used in the current model specification.

After an absence of almost three years, a Volkswagen Polo is now appearing again in the entry list of the endurance championship. The Italian Marco Ferraro will compete in the Reinoldus-Langstreckenrennen as solo driver. The car is a Polo from the one-make cup of the same name which was organised as DTM supporting event from 2004 to 2009. The team Offtrack Performance is made up of personnel all around the car manufacturer from Wolfsburg and their target is to compete in the endurance championship 2018 on a regular basis.

The BMW 120D will also make its return at the seventh round, a car which has appeared in the VLN for the first time at the beginning of the new millennium. This year, the Dürener Motorsportclub has entered Sarah Ganser in the compact car with the diesel engine. The 22 years old rookie ladies’ driver from Stolberg near Aix-la-Chapelle has for the last time been at the start of the endurance championship in 2015.

Kissling Motorsport from Bad Münstereifel nearby the Nürburgring will have its 40th anniversary. To celebrate this jubilee accordingly, the team around Stefan Kissling will bring onto the market an edition of the Opel Astra TCR which is limited to ten units. One of the cars of the “40th” edition will be driven by Volker Strycek and Hannu Luostarinen at the seventh VLN race. In the upcoming touring car class within the VLN, the experienced driver duo will have to fight against some strong competitors with race cars from Audi, Seat and Volkswagen.