VLN season opener: It will be a true festival 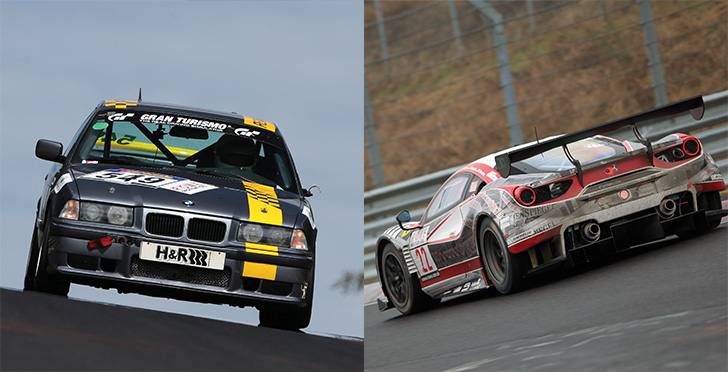 The anticipation is increasing: The action at the “Green hell” will finally get under way again this Saturday, 25th March 2017. After a long winter break – the engines stopped at the legendary Nürburgring Nordschleife for almost five months – the VLN endurance championship will start its 41st season with the 63rd ADAC Westfalenfahrt. More than 190 cars are entered for the season opener and they will provide a motorsport festival at its best for all the fans.

The best of the best in European motorsport will take part. This includes successful top stars from the international sports car scene, former Le Mans winners and almost half of the DTM drivers. And we will see top cars such as Audi R8 LMS, Bentley Continental GT3, BMW M6, Ferrari 488, Lamborghini Huracan, Mercedes-AMG GT3, Nissan GT-R Nismo and Porsche 911 GT3, completed by exotic cars such as the Renault R.S. 01 and the Glickenhaus SCG003C, which will make the hearts of the fans around the Nordschleife beat faster. Not less than 36 top-class race cars in the categories GT3 (SP9) and SP-X will fight for the day victory. One or another pure GT Series may look enviously on this result.

The true heroes are driving compact cars
In the worldwide biggest grassroots racing series, the true heroes can nevertheless be found outside the top group. One of the very special attributes of the VLN is that the competing cars vary from top cars with more than 500 HP down to series-based competition touring cars with just 1.8 litres cylinder capacity.

Reiner Thomas from Hürth/ Germany and Manfred Schmitz from Kerpen/ Germany are thus for example competing in class V2 with their small BMW 318is at the opening round of the season. Their series-based production car figures less than one third of the most powerful race cars in the top category but the driver duo is at least as enthusiastic about competing in the VLN series at the Nordschleife. And when they take the chequered flag after the four hour race distance, their pleasure will probably even greater than the one of the successful professional racing drivers. Thomas and Schmitz have regularly participated in the VLN since 2013. In 2016, they finished all the races – every time as the class winners. Admittedly, on seven occasions they could only have beaten themselves as they drove the only car in class V2. That does however not at all reduce their ambition, they will fully attack again in 2017.

Spectators darlings from the region
It is not a condition to compete in a compact car to be on top of the list of favourites of the true and competent VLN fans. This is of course also possible with a GT3 car as WTM-Racing and Frikadelli-Racing have traditionally and impressively demonstrated since years on and at the Nordschleife.

WTM this year stands for “Wochenspiegel Team Monschau”. Team owner Georg Weiß has changed brand and car during the winter break: Ferrari 488 GT3 instead of Porsche 911 GT3 R. The entrepreneur from Monschau in the Eifel region will however continue to start into the new VLN season with his long-time companions Oliver Kainz, Jochen Krumbach and Mike Stursberg. Considering the concentrated power of their rivals in the GT3 class, a result in the top ten will yet be difficult this year. It can nevertheless be taken for granted that the fans will cheer the performance of the private driver quartet, also because the brand-new Ferrari will be a change in the field and underlines the individualism of Weiß.

Frikadelli-Racing welcomes a new member. The third driver in the Porsche of meat product manufacturer Klaus Abbelen and his partner Sabine Schmitz will this year for the first time be Andreas Ziegler from Remagen/ Germany. After one year in an Audi R8 LMS, the newcomer in the team – the 46 years old local hero ranks amongst the experienced drivers at the Nordschleife – returns to the nine eleven, various models of which he has already driven in the six previous years. In 2015, he achieved his so far only class win with the GT classical race car from the Stuttgart factory. The Austrian Norbert Siedler will complete the Frikadelli quartet.

Age does not protect against racing speed
The by far oldest race car in the colourful mix on the starting grid is the Opel Manta of Olaf Beckmann. The sports coupé has been racing in the endurance championship since 1994 and scored 51 class wins in 113 races – with no end in sight. It is not only the car which has reached a high age (meanwhile much more than 50,000 racing kilometres), Beckmann and his colleagues Peter Hass and Volker Strycek, too, are rich in experience. They all together come up to 189 years in the Manta.

This year again, Volker Strycek will furthermore demonstrate again that the VLN is a true family affair. Together with daughter Lena and son Robin in the Opel Astra OPC Cup, the former DTM Champion will again compete as double starter.

The Champions will go separate ways
While the Manta trio is a really close team, Alexander Mies and Michael Schrey, the current VLN champions and winners of the BMW M235i Racing Cup, will go separate ways in 2017. Schrey keeps faith with the Team Bonk-Motorsport and the BMW Cup whereas Mies has changed to Gigaspeed Team GetSpeed Performance into the Porsche Cup class. He will be in a team there with Tim Scheerbarth, the VLN champion of the year 2011, and Steve Jans from Luxembourg. They will drive a Porsche 911 GT3 Cup. Considering their own potential, the driver trio would have good chances for the title in 2017 if there were not the well-tried scoring system in the VLN with the number of points that can be gained depending on the number of starters in the various classes. Only five cars are entered in the Porsche Cup class for the season opener, so the maximum points to be scored will be quite poor, even for the class winners.

Experience VLN: Live on-site or in the internet
In the VLN endurance championship Nürburgring, the principle of letting fans come close to the action does not represent a simple marketing formula. Motorsport in the VLN is so close you can touch it. As long as the engines are stopped, the fans with a paddock ticket will also still have access to the pit lane and even onto the starting grid. Upon payment of the family-friendly ticket price of €15 (free admission for children and young people up to 14 years), visitors have moreover free access to the open grandstands at the Grand Prix Circuit. Tickets will be available on-site at the access points to the paddocks and to the grandstands.

Those who prefer to stay at home will this year benefit from a clearly improved service: There will be a livestream from 8h15 to approximately 16h30 through the official website vln.de with even more onboard camera live pictures from the “Green Hell”. The online transmission will be completed by live timing and live ticker.

The timed practice will take place between 08h30 and 10h00. The start of the race running over four hours will be given at 12 o’clock