Joint interview part 1 – Claudius Karch and Ivan Jacoma: “It was a fantastic year for us” 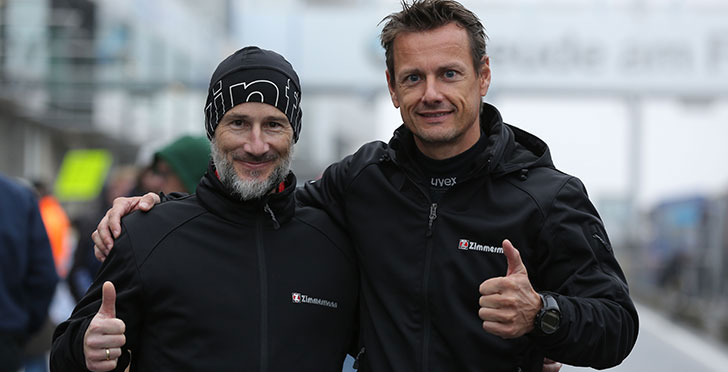 What does the title in the VLN Production Car Trophy 2016 mean to you?
Ivan Jacoma: “For me, this victory was incredibly important. I have after all been competing in class V6 already since 2013. Claudius and I have been very strong last year already in the team of Mathol and then in 2016, almost everything was running perfectly.”
Claudius Karch: “After my win in the RCN Championship in the year 2012, this is now definitely my biggest success which means a lot to me. Even though the target that we set before the beginning of the season had been to win the VLN Championship.

You had an almost perfect season. You finished eight of the ten races with a class win, once you finished third and you retired once. What was the problem in these two rounds?
Ivan Jacoma: “I had an accident in the sixth round. In the so-called “courage-bend”, I wanted to pass a BMW, the driver didn’t see me and we had a collision – a normal racing incident which may happen. In the ninth round, Claudius was involved in a similar incident at the Wippermann section.”
Claudius Karch: “Actually, I had already overtaken the other car when we had this collision. I suffered a tyre damage and the sensors were misaligned. We nevertheless managed to repair the car and finally still finished third. Without these two incidents, we would most probably have won class V6 in each race.”

With eight class wins, you have taken the maximum in the championship classification as the regulations provide for two no-score results. You nevertheless had no chance to win the championship. Are you frustrated about this?
Claudius Karch: “Everything was looking fine after the first four races. But when we then saw that Schrey and Mies, too, always won their class, we already realized that we won’t make it this time.”
Ivan Jacoma: “I joined class V6 in the year 2013 because there was always something like 18 cars or more, so the chances to win the championship were quite good. The numbers of starters, however, went considerably down in the last years. So it is of course a pity that it was just not enough this year for this particular reason. On the other hand, Schrey and Mies have absolutely deserved the title. The performance which they showed in the BMW M235i Racing-Cup was absolutely impressive.“
Claudius Karch: “It was nevertheless a fantastic year. A class win in V6 is in any way cool. Had someone told me three years ago that I would finish almost each race in a VLN season with a class win, I would probably have called him crazy. And if he then had added that I would nonetheless finish only third in the championship, I would have tapped my forehand. It is really crazy. If we hadn’t finished amongst the top three and won the Production Car Trophy, I would definitely have been disappointed. But now, I am not.”

We will publish this interview in three parts. The second part will be published on this website on Tuesday (13.12.) and the third part on Wednesday (14.12.).