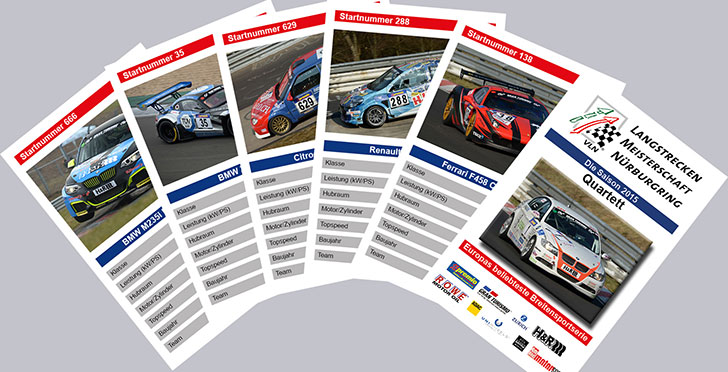 How many horse powers do the race cars generate, what is their top speed and when were they built? In former times in our childhood, we used to answer such and other questions by playing car quartet card games. The fans around the race track are able to do exactly the same now with the cars participating in the VLN endurance racing championship. The first official VLN Quartet card game covers the total of 52 cars with all their technical specifications.

“We have tried to cover as much details as possible”, says Martin Brock-Konzen. It is already three years ago that he had the idea to create a quartet card game and was now able to implement his idea. “When I got the final confirmation from a sponsor, the work could start.” And the result is really impressive. Vehicle class, performance, displacement, engine, year of manufacture and top speed are specified on the corresponding cards. “I am already looking forward to see the fans sitting at the track and playing card games, just like in former times at school”, says Brock-Konzen. According to the motto: “Cylinders: eight” – “Not at all. 12 cylinders is the right answer.”

All classes are represented in the game. This includes of course the championship winning car of Derscheid as well as all the Cup classes, historic cars and naturally also the GT3. “With the exception of the old Audi R8 LMS ultra, all of the GT3 cars that have so far competed in the VLN this year are included”, Brock-Konzen informs. The Farnbach Lexus, that is expected to join the VLN in class SP-X shortly once it has got its classification in the Balance of Performance, is also included. The ‘smaller’ race cars, too, have not been forgotten.

The Quartet card game will be available at the fan shop in the paddocks at the third race and it will cost 5 Euro.