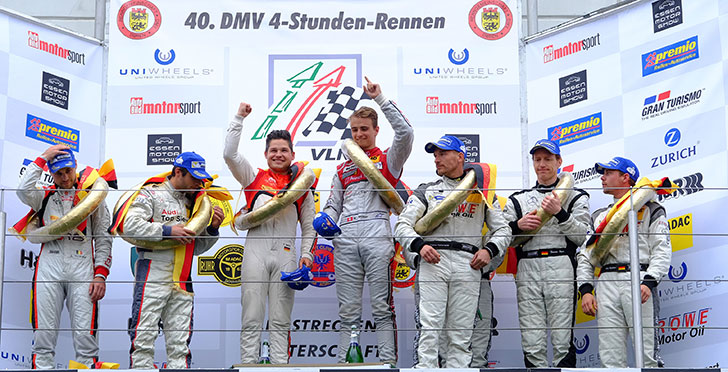 The second round of the VLN endurance racing championship will go down in history: The Audi Sport Team WRT celebrated the worldwide ever first victory of the Audi R8 LMS, the latest GT3 version of the super sports car made in Ingolstadt/Germany, which was presented on occasion of this year’s Geneva International Motor Show. Christopher Mies (Heiligenhaus/ Germany) and Nico Müller (Switzerland) took the chequered flag after 4:05:04,851 hours race duration in first position. The Belgian team had right two reasons to jubilee as the team marked a one-two win with Pierre Kaffer (Switzerland) and Laurens Vanthoor (Belgium) finishing second. The podium was completed by Klaus Graf (Dornhan/ Germany), Christian Hohenadel (Illingen/ Germany), Nico Bastian (Frankfurt/ Germany) and Thomas Jäger (Munich) in the Mercedes-Benz SLS AMG GT3 of the team ROWE RACING. In the changing weather conditions, 139 of the 180 starters were finally classified. A 30 minutes summary of the race will be shown in channel Sport1 on 2 May at 15:30 hrs.

In the morning, the VLN championship still seemed to be new ground for DTM driver Nico Müller but right at his first competition at the Nordschleife, he made it to a victory. The Swiss driver thus joins this exclusive group of drivers who have previously succeeded in this unbelievable achievement. One of those was Bernd Schneider. It was in 1990 when he, too, won straightaway at his first participation in the VLN. Later on, he became the record winner and champion and was thus awarded the title ‘Mr. DTM’. “I am really happy”, said Müller. „After our bad luck in the qualifying due to the weather, we could move ahead well in the race.“ His team mate Mies adds: “Our strategy was perfect and almost every time had we fitted the right tyres, whether it was raining or the track getting dry. This is why we were able to catch up from position 14 on the grid up into the leading group.” The driver duo in the sister car complained about a damaged tyre in the race. “We lost a lot of time as a consequence”, said Kaffer. “All together nevertheless a good result because it was most important here to bring an undamaged car to the finish, now only three weeks ahead of the 24h Race at the Nürburgring. Happy about their third place was also Nico Bastian, as ROWE RACING, too, is focused on the preparation of the classical long distance race. “We were the only team competing with four drivers in one car already now”, he said. “This is a big disadvantage in particular when it is wet as once more we have a new driver in the car after an additional pit stop and he must first of all get used to the conditions at the Nordschleife in his first lap.”

The three Norwegian Hakon Schjaerin, Atle Gulbrandsen and Kenneth Ostvold really completed a tour de force. The driver trio managed to move up into the leading group with their front-wheel driven Audi TTRS 2,0 and finished the race – despite their car with considerably less power compared to the GT3 race cars and the Cup-Porsche – in 15th place. It goes without saying that they were of course also first in their class of VLN Specials up to 2,000 cc cylinder capacity with turbo engines (SP3T) finally after this small sensation.