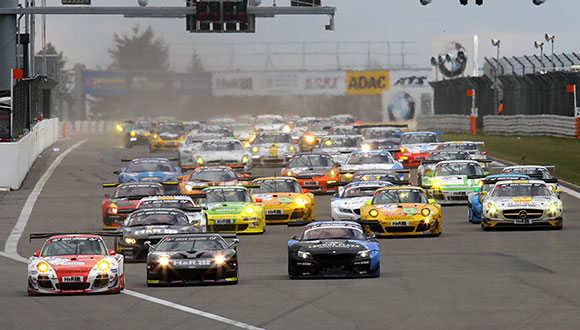 The launch of the VLN endurance racing championship season at the Nürburgring had turned out to be a delighting event for all motor sport fans and the second round of the season which is now imminent, the 55th ADAC ACAS H&R Cup, is about to even exceed this success. The organiser expects more than 200 teams to start at the rehearsal for the ADAC Zurich 24h Race on Saturday, 27th April. More than a quarter of the participants will fight for the overall win and the considerable number of 29 class wins will be awarded in this most popular grassroots racing series. The provisional entry lists figures almost 550 drivers from 30 different countries who will take up the challenge in cars of 25 different automobile makes.

The more than 30 cars in GT3 class SP9 will again have a tough competition. In addition to the teams which had already participated in the opening round, there will be a handful of new cars which are well able to attract a lot of attention and to fight for the overall victory. Wolf Henzler (Nürtingen/ Germany) and Peter Dumbreck (Great Britain) will for example make their debut this year in the Porsche 911 GT3 R of the team Falken Motorsports. Also for the first time this year, the Haribo Racing Team has entered the drivers Richard Westbrook (Great Britain), Mike Stursberg (Wermelskirchen/ Germany) and Hans Guido Riegel (Bonn/ Germany). The team of Phoenix Racing has again entered the Stuck brothers, who will this time be supported by Frank Stippler (Bad Münstereifel/ Germany), and two further Audi R8 LMS ultra. The super sports car from the Ingolstadt factory with start number 5 will be driven by Marcel Fässler (Switzerland), Markus Winkelhock (Berglen-Steinbach/ Germany) and Michael Ammermüller (Pocking/ Germany) and the steering wheel in car number 37 will be shared amongst Roman Rosinov (Russia), Luca Ludwig (Bornheim/ Germany) and Frank Biela (Monaco). Florian Gruber (Aham/ Germany) and Ronnie Saurenmann (Switzerland) as well as Marco Werner (Switzerland), Christian Bollrath (Gabun/ Germany) and Dominique Bastien (USA) will compete for the team of Audi Race Experience. The Audi R8 teams will be completed by Laurens Vanthoor (Belgium), Edward Sandström (Switzerland) and Christopher Haase (Kulmbach/ Germany), entered by the Belgian Audi Club Team WRT. The group of the Mercedes-Benz SLS AMG GT3 will for the second VLN round also be increased by some very important drivers. The Black Falcon team has amongst others entered Bernd Schneider (Switzerland), Jeroen Bleekemolen (Netherlands) and Sean Edwards (Geat Britain) as well as Nicki Thiim (Denmark) and Christian Bracke (Essen/ German). The BMW Sports Trophy Team Marc VDS has entered not less than three cars. The BMW Z4 GT3 will be driven by Yelmer Buurman (Netherlands), Dominik Schwager (Munich), Andrea Piccini (Italiy), Markus Paltalla (Belgium), Henri Moser (Switzerland), Maxime Martin, Bas Leinders (both from Belgium) and Richard Göransson (Sweden). New drivers have joined three of the Porsche teams: Porsche works driver Patrick Pilet (France) will support Frikadelli-Racing and Richard Lietz (Austria) will start in the 911 of the team Pinta Racing. Timbuli Racing has for the first time in the current season entered Marc Hennerici (Mayen/ Germany) and Pierre Kaffer (Switzerland). The first participation at the Nordschleife for the Aston Martin Vantage GT3 will be undertaken by the two former DTM drivers Stefan Mücke (Berlin) and Darren Turner (Great Britain). The Porsche 911 GT3 RSR of Manthey Racing, which had still shown a performance below its potential at the opening round, will be driven by some very strong drivers at the H&R Cup race. With Timo Bernhard (Bruchmühlbach-Miesau/ Germany) and Romain Dumas (France), regular driver Jochen Krumbach (Eschweiler/ Germany) will on Saturday be supported in the strong race car in class SP7 by two true experts of the Nordschleife.

In addition to the two classes SP9 (GT3 cars) and SP7 (VLN Specials up to 4000 cc cylinder capacity), which figure 30 and 12 cars respectively in the provisional entry list, further classes are standing out as this year’s Champion may well come from these classes. In accordance with the successful formula ‘The more competitors you have in your class, the more points you may score’, the battles in the classes with the most participants are very tough. Ten or more cars will also start in the classes Cup 1 (Opel Astra OPC Cup, 19 cars), Cup 3 (Renault Clio Cup, eleven cars), SP10 (GT4 vehicles, ten cars), SP3T (VLN Specials up to 2000 cc cylinder capacity with turbo, 13 cars) and V6 (VLN production cars up to 3500 cc cylinder capacity, 14 cars). These conditions promise exciting fights about positions, not only for the race win but also in the midfield of the endurance racing championship.

The start for the second round of the year running over the distance of four hours on the 24.358 kilometres long combination of the Nürburgring short version and Nordschleife will be given at 12 o’clock exactly. The positions on the starting grid will be determined on basis of the timed practice to take place before between 08:30 and 10:00hrs. The entry fee for the paddocks, the starting grid and the open grandstands at the Grand Prix Circuit is family-friendly 15 euro per person. Children up to 14 years have free entry and spectators all around the Nordschleife are not liable to pay an entry fee, either.