Bleekemolen and Schneider win in their SLS AMG GT3 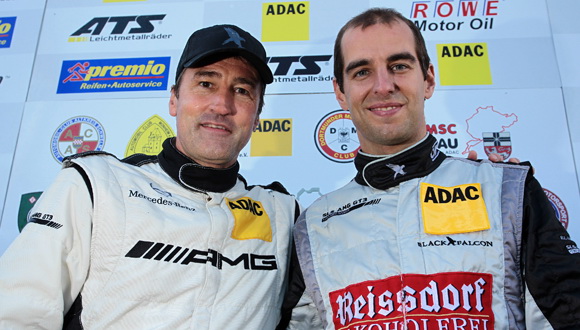 Bernd Schneider (Switzerland) and Jeroen Bleekemolen (Netherlands) could celebrate a victory at the ROWE DMV 250-Miles Race. Schneider, the most successful DTM driver of all time, took the chequered flag in the Mercedes-Benz SLS AMG GT3 of the team Black Falcon after four hours race time and 28 completed laps as race winner. His advance ahead of the second-placed team of Manthey Racing with drivers Jochen Krumbach (Eschweiler/ Germany), Romain Dumas (France) and Timo Bernhard (Dittweiler/ Germany) was 47.036 seconds. Into third position finished Marko Hartung (Wallroda/ Germany), Mark Bullitt (USA) and Nico Bastian (Frankfurt/ Germany) in the SLS AMG GT3 entered by ROWE RACING. A one hour summary will be shown in channel Sport1 on 3rd October at 13:30hrs. More information around the endurance racing championship is available on the official website www.nuerburgring-langstrecken-serie.de as well as in Facebook under www. facebook.com/vln.de.

“It is always fantastic to win a race at the Nordschleife”, said Schneider enthusiastically and celebrated his second VLN victory today after having scored first place in 1990. “For sure, I did not competed enough here during my career to be considered as an expert. There are definitely a lot of drivers who feel much better at the ‘Green Hell’. So our victory has a double value.” At least his team mate felt on top of the world. “I had great fun and many exciting fights during my double stint at the beginning of the race,” said Bleekemolen. “We can be more than happy with our result considering the strong competition.” In the final phase of the race, there was a close battle between Schneider and Bernhard. The Porsche works driver explained: “I was pushing hard and was able to close the gap to Bernd a little, but he showed a brilliant and strong performance and had a super stint. So more was finally not possible.“ Krumbach, too, expressed his compliments: „The team of Black Falcon has deserved the victory.” For the third-placed team, their result on the podium actually was a surprise for them. Start driver Bastian was almost already on his way home. Several penalties were inflicted by Race Control for ignoring yellow flags so that the ROWE team was moved forward. “The third place at my debut in the Mercedes-Benz SLS AMG GT3 is a fantastic result”, said Bastian. “It was pretty cool to start the race from pole position. My target was to join the Nordschleife in first position. Unfortunately, I did not succeed as, in contrast to me, the top Porsche teams did not have any problem to warm up their tyres in the formation lap. Nevertheless, I had great fun during my stint after the first laps. A big thank you to BMW as they have made it possible for me to compete in the endurance racing championship with a third-party brand for the second time now.”

Behind the top three finished Uwe Alzen (Betzdorf/ Germany) and Philipp Wlazik (Gladbeck/ Germany) in the fastest Cup Porsche in fourth place. A competitor, however, lodged a protest against the car so that the class results are suspended until the technical control is completed and the race results are provisional. The following places were dominated by the sports cars from the Zuffenhausen manufacturer: Georg Weiss (Monschau/ Germany), Oliver Kainz (Kottenheim/ Germany) and Michael Jacobs (Roetgen-Rott/ Germany) celebrated their first arrival at the finish. They were followed by Markus Palttala (Belgium) and Patrick Kentenich (Neuss/ Germany) of the team raceunion Teichmann Racing and Andrii Lebed (Ukraine), Steve Jans (Luxembourg) and David Jahn (Speyer/ Germany) in the Black-Falcon-Porsche. The fastest Audi TT RS of the team Raeder Motorsport and the driver trio Christoph Breuer (Nettersheim/ Germany), Elmar Deegner (Stelzenberg/ Germany) and Jürgen Wohlfarth (Murrhardt/ Germany) was classified in eighth place.

The decision in the championship is postponed: LMS Engineering goes into the lead
With their seventh win in the current season in the class of VLN Specials up to 2000 cc cylinder capacity and turbo, Christian Krognes (Norway), Dominik Brinkmann (Dortmund/ Germany) and Ullrich Andree (Cologne) went into the lead with their Volkswagen Scirocco GT24. Their closest rivals, Jannik Olivo and Elmar Jurek (both from Berlin), had to retire after having completed only eleven laps in their Renault Clio. The car had an engine failure. The fans of the VLN endurance racing championship may now look forward to a true showdown at the final of the season. LMS Engineering must win their class again to get the title. Under normal circumstances, the driver duo in the Clio will not be able to become the champions on their own, even if they win the class at the final race. The number of cars competing in class SP3T of their rivals is higher so that Krognes, Brinkmann and Andree will score more points if they win.

The final of the VLN endurance racing championship season 2012 will take place on 27th October. The 37th DMV Münsterlandpokal race will run over the usual distance of four hours.