All of the teams decided to score the most important VLN victory of the yearadmin31. July 201231. July 2012 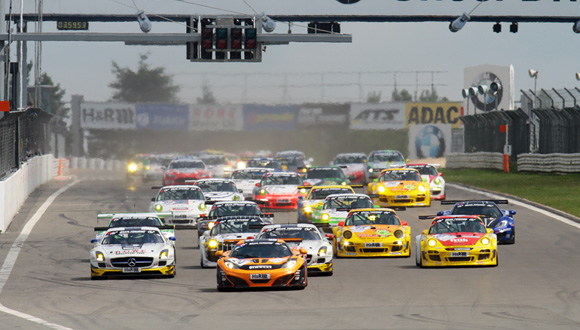 The VLN endurance racing championship Nürburgring will celebrate the highlight of the season on 4th of August with the 6h ADAC Ruhr-Pokal-Rennen um die Trophäe der Opelwerke Bochum. And all of the teams are decided to score this most important VLN victory of the year, both in the overall classification and in all the various classes. Everything will start afresh at this race which is the only one in the season with a duration of six hours and all of the top drivers in German long distance racing will have an exciting get-together. Amongst the top favourites is the team of Phoenix Racing. In addition to two VLN victories, the crew around team manager Ernst Moser has this year also won the Nürburgring 24h Race in the Audi R8 LMS ultra. The team furthermore was awarded the winners’ trophy of the Spa-Franchorchamps 24h Race last weekend to take it back home to Meuspath in the Eifel region. Their strong rivals in the fight for the overall victory rely upon race cars such as BMW Z4 GT3, Ford GT, McLaren MP4, Mercedes-Benz SLS AMG GT3 and Porsche 911 GT3 R. Entrance all around the Nordschleife is free. Access to the open grandstands at the Grand Prix Circuit, to the paddocks and to the starting grid will be granted at the family-friendly price of 15 euro per person. Children up to 14 years of age have free entry. Tickets will be available on-site at the ticket box offices. All kind of information around the endurance racing championship is available on the official website www.nuerburgring-langstrecken-serie.de as well as on Facebook under www.facebook.com/vln.de

With the Audi R8 LMS ultra entered by Phoenix-Racing, René Rast (Stolzenau/ Germany) and Frank Stippler (Bad Münstereifel/ Germany) together in one team scored the victory last weekend of the race twice around the clock at the Spa-Franchorchamps rollercoaster circuit in the Ardennes. At the 6h ADAC Ruhr-Pokal-Rennen now, the two drivers will compete against each other in two different Phoenix teams. Rast will share the cockpit with Luca Ludwig (Bornheim/ Germany) and Stippler in the Bilstein-R8 will be supported by Christopher Haase (Kulmbach/ Germany) and Marc Basseng (Neusalza Spremberg/ Germany). Further super sports race cars from Ingolstadt will be at the start for the team of Raeder Motorsport and Audi race experience. The Schubert team from Oschersleben/ Germany has prepared a surprise for the VLN fans. The BMW Z4 GT3 driven by Abdulaziz Al Falsal (Saudi Arabia), Peter Posavac (Essen/ Germany) and Anders Buchardt (Norway) will start the race in a very special livery. At the sixth round of the season, Dörr Motorsport will demonstrate the quality of the youngest GT3 race car on the grid. Kai Riemer (Stuttgart/ Stuttgart) has already gained very first experience in the McLaren MP4. At the 6h Race, he will attack again together with Rudi Adams (Ahütte/ Germany), Arno Klasen (Karlshausen/ Germany) and Henri Moser (Switzerland). Gemballa-Racing, too, will rely on McLaren. Together with Sascha Bert (Ober-Ramstadt/ Germany) and Pedro Lamy (Portugal), Raymond Coronel (Netherlands) will make his debut in the British GT3 sports car. ROWE RACING has entered two spectacular Mercedes Benz gullwing cars. The crew in the SLS with start number 7 will be made up of Thomas Jäger (Munich), Alexander Roloff (Berlin) and Jan Seyffarth (Querfurt-Leimbach/ Germany), whilst Michael Zehe (Flörsheim-Dalsheim/ Germany) and Marc Bullit (USA) will compete in the car with number 6. Porsche will be represented as strong as usual, the teams of Falken Motorsports, Timbuli Racing, Frikadelli Racing and pinta Racing have all entered Porsche 911 GT3 R race cars. Manthey-Racing, too, traditionally relies upon the sports car from Stuttgart Zuffenhausen. And in the past five years, the cars of Olaf Manthey have scored not less than four overall wins at the 6h Race, amongst those victories was also the race with the greatest distance in the VLN history. In 2010, Lance David Arnold (Duisburg/ Germany) and Christian Menzel (Kelberg/ Germany) broke the 1,000 kilometres mark for the first time after having completed 42 laps (= 1023.498 kilometres). This year, Manthey Racing has entered four 911 in three different classes – first of all double winner Jochen Krumbach (Eschweiler/ Germany) together with Romain Dumas (Switzerland).

There are a lot of highly competitive classes in the strong midfield of the endurance racing championship, providing at least as exciting motor sport for all the spectators as the close fights for the overall win do. A prime example hereby is class SP5 (VLN Specials up to 3000 cc cylinder capacity). Even though all of the victories have been scored by BMW teams, there were six different winners in the six races so far this year. Class SP3 (VLN Specials up to 2000 cc cylinder capacity) will have a revival this year. After some weaker years, the class now again figures ten cars on the average, starting from BMW 320Si and Z4, to continue with Honda Civic and S2000 up to Opel Astra GTC and Renault Clio. A similarly great variety can be found in class SP3T (VLN Specials up to 2000 cc cylinder capacity with turbo). This class includes Audi TT RS and Mitsubishi Lancer Evolution, Opel Astra GTC, Seat Leon Supercopa as well as Volkswagen Golf, Polo and Scirocco.

The positions on the starting grid for the 6h ADAC Ruhr-Pokal-Rennen will be decided in the timed practice session between 08:30 and 10:00 hrs. The race will start as usual at 12 o’clock.