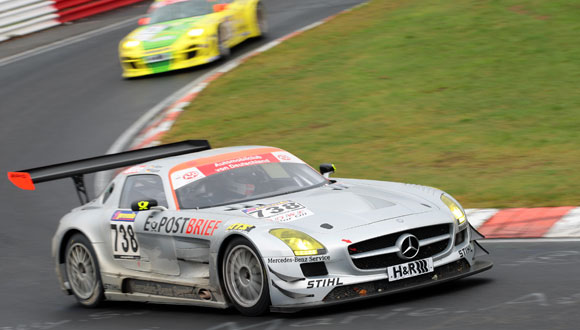 With their second race in the SLS AMG GT3, Thomas Jäger (Munich) and Christopher Haase (Kulmbach/ Germany) will go down in the history of the endurance racing series. The Black-Falcon duo scored a brilliant win at the ninth round of the VLN Langstreckenmeisterschaft Nürburgring and thus made an end to Porsche’s series of 13 consecutive victories. And on top of this great success, this was the first victory of a Mercedes-Benz since the 6h Race in the year 1998. After an exciting race, a great variety in makes could celebrate their respective results on the podium. Timo Bernhard (Dittweiler/ Germany), Arno Klasen (Karlshausen/ Germany) and Lucas Luhr (Switzerland) became second in the Porsche 911 GT3 R entered by Manthey Racing. The podium was completed by Dirk Adorf (Michelbach/ Germany) and Jörg Müller (Monaco) in a BMW Z4 GT3. A preliminary decision in favour of Bonk-Motorsport was taken in the drivers’ championship. Mario Merten (Nürburg/ Germany) and Wolf Silvester (Nürnberg/ Germany) won their class SP3 (VLN Specials up to 2.000 cc cylinder capacity) for the fifth time and at least theoretically, no one can any longer challenge their title win. A 30 minutes summary of the 34th DMV 250-Meilen-Rennen will be broadcasted in Sport 1 on 23rd October at 09:45hrs.

Fastest in timed practice, which took place in the morning, was Chris Mamerow (Castrop-Rauxel/ Germany) in the second SLS AMG GT3 with a lap time of 10:10.686 minutes. The fans of this most popular endurance race series in Europe enjoyed fascinating motorsport under rainy conditions. Several times, the Audi R8 LMS, BMW Z4 GT3, Porsche 911 GT3 R and SLS AMG GT3 changed in the lead. At the beginning of the race, the pole setter was involved in an exciting fight with Frank Stippler (Bad Münstereifel/ Germany) in the Audi R8 LMS entered by Phoenix-Racing, before the top two had a collision in lap five. Mamerow went off the track and crashed into the track limitation. Even though the team mate of DTM record champion Bernd Schneider (Bottighofen/ Germany) was able to make it back to the pits, the team discovered a suspension damage which made it impossible to continue as a repair on-site was not possible. Phoenix-Racing, too, retired later on after an accident of Marc Basseng (Neusalza-Spremberg/ Germany) in lap 13 in the section Kesselchen. The teams which would later end up on the podium then entered into a very close fight about the lead. Due to the changing track conditions, strategy hereby was of very great importance. Close to the race end, race control decided to stop the race before the scheduled time had elapsed when a sleet storm came up. As more than 160 minutes of the scheduled race distance had been run, full championship points will be awarded in accordance with the Sporting Regulations.

“We would never have anticipated this success”, said Jäger happily after the race. “I must however admit that we took some benefit from the conditions today. Our strategy from the very beginning was not to take too great risks, and this has turned out to be successful today. A great motivation for everybody having contributed to this project.” Black Falcon took an advantage of their conservative strategy not to change tyres when the track got dry. “We, in contrast, have changed tyres once too much”, admitted their rival Luhr. “Under these weather condition, strategy was however a gamble today – typical for the Eifel region. It could have worked out, too. We will now seek revenge in two weeks time.” Third-placed Adorf was very happy with their result: “First of all, I am very happy that we were at all able to start again at the Nordschleife this year. To finish right on the podium is simply fantastic. I had quite a few moments in the race due to the weather. We were anyhow particularly fast when the track was really wet.”

At this 34th DMV 250-Meilen-Rennen Bonk-Motorsport has taken a great step forwards regarding the title. Merten/ Silvester are uncatchable in the lead. Their title would only be in danger in the case of an exclusion at the final race on 31st October as this non-classification would have to be considered as one of the eight results out of ten races counting towards the championship. The duo celebrated their fifth win in class SP3. The top three in this class were completed by Jannik Olivo and Elmar Jurek (both from Berlin) in the fastest of the Renault Clio and by Alexander Böhm (Kelberg/ Germany), Philipp Leisen (Irrel/ Germany) and Carsten Knechtges (Mayen) in the BMW 320 of Black Falcon. The dreams of Elmar Deegener (Stelzenberg/ Germany), Jürgen Wohlfarth (Murrhardt/ Germany) and Christoph Breuer (Nettersheim/ Germany) to gain the title in the Audi TT are now also spoiled. The trio lost a lot of time after a spin in the first lap and finally finished into fifth position in class SP 3T (VLN Specials up to 2.000 cc cylinder capacity with turbo).

The season final of the VLN Langstreckenmeisterschaft Nürburgring will take place on 30th October 2010. The 35th DMV Münsterlandpokal race will cover the usual distance of four hours.