Full speed into the second half of the season 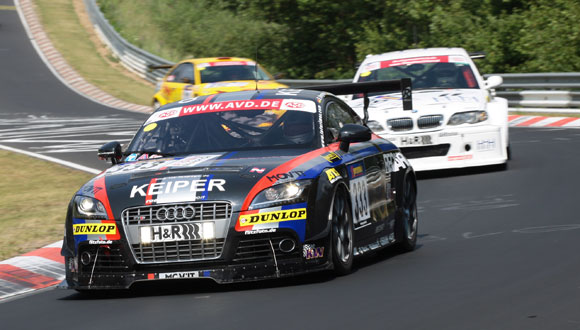 The second half of the VLN Langstreckenmeisterschaft Nürburgring season will start next Saturday, 17th July 2010. The 33rd RCM DMV Grenzlandrennen organised by the Rheydter Club für Motorsport will take place during the Nürburgring Performance Days – an event which promises a weekend full of exciting motor sport action for the whole family. One of the many highlights shall be the big VLN summer party to take place on Saturday evening. Whilst, during the day, the spectators will be able to enjoy spectacular racing cars starting from Aston Martin to Audi R8, BMW Z4 and Chevrolet Corvette up to Dodge Viper and, not to forget, Porsche 911, top show acts will provide the main show in the evening in the Eifel village ‘Green Hell’. After an unforgettable racing experience on Saturday, the fans themselves may next day actively get involved in racing. Whether this includes laps around the Nordschleife, an 1/8 Miles Race at the start and finish straight or taxi drives in the Mercedes Arena – adrenaline at its best. A 30 minutes summary of the 33rd RCM DMV Gernzlandrennen will be broadcasted in Sport 1 on 24th July at 10:45 hrs.

The races of the first half of the season had been marked by the battles between Audi and Porsche. And after five races, the intermediate standing is 5:0 in favour of the customer teams with the sports cars from Zuffenhausen. Audi will however be very well represented again at the Grenzlandrennen. Hans-Joachim Stuck (Austria) has very well coped with his accident at the last race and will, together with Marc Basseng (Leutenbach/ Germany) and Frank Stippler (Bad Münstereifel/ Germany), constitute a very strong team in the Audi R8 of Phoenix-Racing. Black Falcon will also again start with the two R8 race cars. One of those will be driven by Johannes Stuck (Liechtenstein/ Germany) and Christer Jöns (Ingelheim/ Germany), the crew in the sister car is made up of Vimal Mehta (Great Britain), Sean Patrick Breslin (Ireland) and Bona Ventura (Cologne). The strong Audi armada will be opposed to Mathey-Racing entering the strong duo with drivers Romain Dumas (Switzerland) and Arno Klasen (Karlshausen/ Germany) in a Porsche 911 GT3 R. The sister car in the Haribo livery will be driven by Lance David Arnold (Duisburg/ Germany) and Christian Menzel (Kelberg/ Germany). The team of Mamerow-Racing will be completed by team junior Chris Mamerow (Castrop-Rauxel/ Germany) who is still shown as solo driver in the list of entries. Entered in a GT3 Porsche are also Sabine Schmitz and Klaus Abbelen (both from Barweiler/ Germany), Georg Weiss (Monschau/ Germany), Michael Jacobs (Roetgen/ Germany) and Oliver Kainz (Kottenheim/ Germany) as well as Armin Hahne (Wimbach/ Germany), Jochen Krumbach (Eschweiler/ Germany) and Marc Gindorf (Monaco).

A clear upward trend can also be observed for the currently only team competing in a BMW Z4 in the specification of class GT3. The trio of Dörr-Motorsport with Rudi Adams (Ahüte/ Germany), Stefan Aust (Castrop-Rauxel/ Germany) and Peter Posavac (Essen/ Germany) recently finished into an excellent sixth overall position.

In favour of our environment
The fans of the VLN Langstreckenmeisterschaft Nürburgring may look forward to a comeback of the natural gas driven Viper of the team with skateboard expert Titus Dittmann (Münster/ Germany). The eco-racer celebrated its first racing appearance at the 24h Race Nürburgring. Dittmann senior and junior Julius, together with rock musician Victor Smolski (Beckum/ Germany), will share the cockpit. Due to extensive modifications carried out on the car, the Dodge Viper will be racing CO2 neutral.

Party for everyone after the race…
The big VLN summer party will take place in the Eifel village ‘Green Hell’ after the sixth round of the year. This new event will not only replace the annual paddock party but also includes the traditional marshals and officials get-together. The combination of both events goes along with an attractive entertainment programme which will start with the folklore band ‚Uedelhovener Dorfmusikanten’. Further points on the programme are the Country Band Crossfire and the highlight of the evening will certainly be the performance of ‚Victor Smolski & Friends’. In addition to the man of action of the well-known hard rock band Rage, track commentator Lars Gutsche will also touch the strings of a bass guitar. At the time of sunset, the performance of ‘fire dancer’ will definitely provide an additional impressive show.

Nürburgring Performance Days: first hand experience of motor sport
The Nürburgring Performance Days will have their first edition in 2010. This event for the whole family has nevertheless the potential to become a classic part of the programme at the most beautiful race track of the world. After the 33rd DMV RCM Grenzlandrennen and the big VLN summer party, the active involvement of the visitors will come to the fore on Sunday. The fans will be able to experience driving at the legendary Eifel track at the Nordschleife. Open for everyone as well will be the 1/8-Miles-Race on the start and finish straight. The ‚Street Eliminator’ will demonstrate how it works and everyone is then invited to take up the challenge in his/her own car. Anyone preferring more twisty roads can refer to the taxi drives in the Mercedes Arena. Additional highlights will be provided with the exhibition of high performance cars at the ring°boulevard, a power testing station as well as a rollover simulator. Anybody thinking of spending more time in the future in driving at the Nordschleife will find like-minded people at the presentation of the touristic drivers’ forum (www.touristenfahrer.de) in the pit lane. In addition to the usual motor sport talk, information and tips with regard to correct behaviour on the track can be found there.