The two most wonderful pastimes in the world 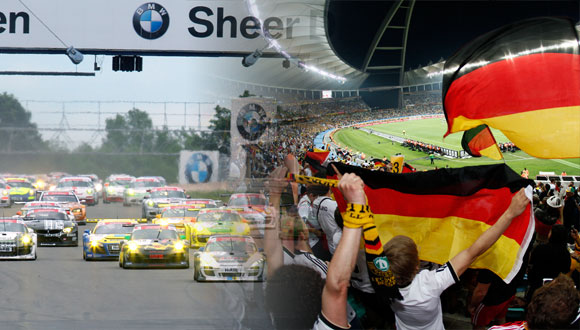 On Saturday, 3rd July 2010, the two most wonderful pastimes in the world will clash: Motor sport and soccer. The 50th ADAC Reinoldus Langstreckenrennen organised by the Dortmunder Motorsport Club will make the start. This fifth round of the VLN Langstreckenmeisterschaft Nürburgring will conclude the first half of the season of this most popular endurance racing championship in Europe. After the 4 Hour Race, the visitors at the Nürburgring will have the possibility to see the quarter-final of the World Cup in South Africa live at the Public Viewing organised at the ring°boulevard when the German soccer team will play against Argentina. To ensure that the fans will not miss any second in either of the events, the VLN has decided to start the race at 11:30 am. After the finish at 3:30 pm, everybody will thus have the opportunity to keep the fingers crossed for the German players Schweinsteiger, Podolski, Klose and Co. After the international match, the party will go on seamlessly with the official prizegiving ceremony of the VLN round to which all of the fans are cordially invited. After the final whistle in Capetown, this ceremony will exceptionally also take place at the ring°boulevard.

Anybody wishing to be in the front at the fifth round of the year must get up very early because – as a consequence of the modification of the timetable – the schedule for the timed practice session will also be amended. The decision about the positions on the grid of the 50th ADAC Reinoldus-Langstreckenrennen will be taken between 8 and 9:30 am.

One of the candidates for a day victory is Chris Mamerow (Castrop-Rauxel/ Germany) who recently celebrated the second win in a row together with Marc Basseng (Leutenbach/ Germany). Basseng, however, will not be able to take part in the coming race so that Mamerow will compete as solo driver, if necessary. The fast Porsche driver has already several times confirmed that he is well able to do so. Due the extremely high temperatures which are to be expected, it might turn out to be very difficult to achieve this target. The competitors, in particular in person of Frank Stippler (Bad Münstereifel/ Germany) and Hans-Joachim Stuck (Ellmau/ Germany), will take up the challenge. “We will definitely attack in July”, announced Stuck already after the last race in which he was finally beaten by Mamerow by razor-thin 0.240 seconds after an exciting fight. The Phoenix Team has made big progress in the set up of the Audi R8 LMS so that the first victory of the season seems to be within reach.

Manthey-Racing, too, have already scored some victories. The two wins were achieved by the Porsche 911 GT3 R which will be driven by Marc Lieb (Ludwigsburg/ Germany), Arno Klasen (Karlshausen/ Germany) and Oliver Kainz (Kottenheim/ Germany) at the Reinoldus-Langstreckenrennen. At the last race, however, it was Lance David Arnold (Duisburg/ Germany) and Christian Menzel (Kelberg/ Germany) who pulled the chestnuts out of the fire in the Porsche of the Haribo Team-Manthey. Position three and the first race finish provide a good base for the coming races. This Saturday, Arnold will share the cockpit of the Haribo-Porsche with multiple Supercup Champion Richard Westbrook (Great Britain). Sabine Schmitz and Klaus Abbelen (both from Barweiler/ Germany), Georg Weiss (Monschau/ Germany), Michael Jacobs (Roetgen/ Germany) and Peter-Paul Pietsch (Leonberg/ Germany) as well as Armin Hahne (Wimbach/ Germany), Jochen Krumbach (Eschweiler/ Germany) and Marc Gindorf (Monaco) will also rely on the GT3 Porsche which has so impressively demonstrated its performance at the Nordschleife.

More than just a touch of colour: Outstanding personalities on the grid
It is very often the outstanding personalities on the grid consisting of about 180 cars on the average in the VLN Langstreckenmeisterschaft who attract a lot of attention with the fans around the 24.369 kilometres long combination of the Nürburgring short connection and the Nordschleife. The BMW M1 driven by Achim and Peter Heinrich (Simmerath/ Germany) will for example come back again to the 50th ADAC Reinoldus-Langstreckenrennen. The sports racing car from Munich looks back onto a spectacular motor sport history. The car has been completely updated according to current standards for its participation at the Nordschleife. Another outstanding car will definitely be the Ginetta G50 in which Torsten Kornmeyer (Königswinter/ Germany) and Hendrik Still (Schalkenbach/ Germany) will start in class GT4. The British super sports racing car had its first participation in the ‘Green Hell’ in 2010. Many additional extraordinary racing cars round off the picture at the endurance racing championship and provide a welcome change on the grid.