Dress rehearsal for the 24-hour race 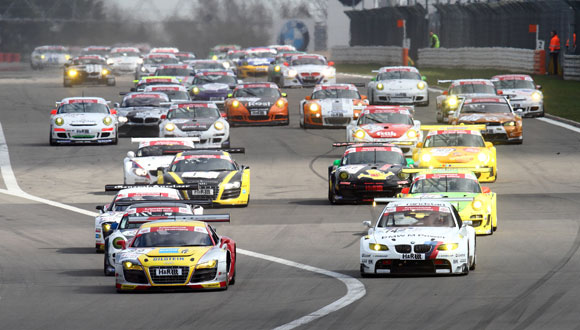 For various reasons, the third round of the VLN Langstreckenmeisterschaft Nürburgring, will be an extraordinary event. First of all, the 52nd ADAC ACAS H&R Cup is the final round prior to the 24-hour race at the Nürburgring and thus the final chance to test in preparation for the endurance classic for numerous teams. Next to prominent drivers like Andy Priaulx, Pedro Lamy, Christian Abt and Hans-Joachim Stuck, the dress rehearsal will also see some debuts. The works-entered Aston Martin Rapide and the new natural-gas-powered Dodge Viper owned by skateboard legend Titus Dittmann will be out on the Nordschleife for the first time. And it that weren’t enough, an extraordinary event will already be taking place on Friday prior to the race. In the afternoon, Formula 1 star Nico Hülkenberg will conduct an exclusive test on the Nordschleife with the hybrid-Porsche that Jörg Bergmeister and Wolf Henzler drove to third place in the second round of the season, celebrating a historic success.

The entry for the third round is quite impressive as the provisional entry list already includes 201 cars. With late entries usually being added, the Automobilclub Altkreis Schwelm is expecting a capacity field for qualifying from 8.30 am and the four-hour race from noon onwards.

This much is certain already: there will be a new winning car in the third round of the season as Manthey Racing has opted to keep the Porsche 911 GT3 R that already scored two wins for the local team this year, in the garage. On Saturday, regular driver Marcel Tiemann will be sharing driving duties in the SP7-Porsche with Peter-Paul Pietsch and Oliver Kainz. From Manthey’s perspective, Armin Hahne, Jochen Krumbach and Marc Gindorf could fill in the gap, as they will be racing their new Porsche 911 GT3 R for the first time. After two retirements, Mamerow Racing is determined to break its duck. In the H&R Cup, Chris Mamerow will be racing together with Wolf Henzler. Audi again has a strong presence, too. Next to the pair of Phoenix R8s with strong line-ups and the singleton Abt Sportsline entry, the Audi race experience Team Joest will be present for the first time. Professional drivers Marco Werner and Florian Gruber will be involved in the debut of this sportscar project. Next to the journalists Peter Wyss and Jochen Übler, Alfred Wolfsgruber and Wolfgang Dess will be driving. BMW Motorsport has entere a pair of cars. The two BMW M3s will be driven by Jörg Müller, Augusto Farfus and Pedro Lamy and Dirk Werner, Dirk Müller, Dirk Adorf and Andy Priaulx.

Next to the top teams, an array of exotic sports cars will be on the grid, all of them able to catch the attention with good results. Among them are the works entries from Dodge and Aston Martin, the Vulkan Racing Team Mintgen Motorsport’s Dodge Viper, Boes Motorsport’s pair of Ginetta G50s and the Hankook Team Farnbacher’s Ferrari F430 GTC.

Nico Hülkenberg to test hybrid-Porsche on the Nordschleife
An extraordinary event will already be taking place on Friday prior to the 52nd ADAC ACAS H&R-Cup. From 2.45 pm onwards, Formula 1 star Nico Hülkenberg will conduct an exclusive test with the hybrid-Porsche. Hülkenberg is perfectly familiar with the flywheel generator that is collecting the Porsche’s energy. The generator has been conceived and constructed by Williams Hybrid Power according to Porsche’s requirements. The energy stored under braking helps optimise fuel consumption and allows temporary power boosts fro the drivers. “This test surely will be an entirely new experience to me”, says Hülkenberg.