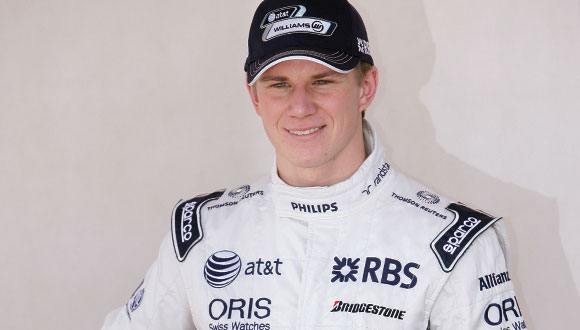 Formula 1 star Nico Hülkenberg will take the opportunity to test the Porsche 911 GT3 R Hybrid during the 52nd ADAC ACAS H&R Cup at the Nürburgring Nordschleife. The 22 years old race driver will start at the ‘Green Hell’ on Friday before the third round of the VLN Langstreckenmeisterschaft Nürburgring at about 14:45hrs.

“I have never driven around the Nordschleife with a race car”, informs the Williams F1 driver. “That will probably be a totally new experience for me. In addition, I have only raced in formula cars in my career up to date, so I am looking forward to see how the GT3 Porsche with hybrid system will behave.”

The driver in the Williams team has a special relationship to the high-tech Porsche as the company ‘Williams Hybrid Power’ which is affiliated to his employer is responsible for the engineering in the sports car from Zuffenhausen. The flywheel generator patented by WHP is a novel regarding electromechanical flywheel systems that provides energy recovery, storage and distribution. The system with a variety of applications was originally developed to be used in Formula 1. The energy stored under braking helps to save fuel and is available to the drivers as additional performance.

The Hybrid Porsche had its first race participation end of March during the VLN Langstreckenmeisterschaft Nürburgring and finished into sixth overall position. Two weeks later only, Jörg Bergmeister and Wolf Henzler celebrated the first podium result for the Hybrid Porsche when they took the chequered flag into third place.

The day after the extraordinary test session of Nico Hülkenberg, the action is going on at the Nürburgring. The third round of the VLN endurance racing championship, the 52nd ADAC ACAS H&R Cup, is on the schedule of this most popular long distance series in Europe. About 180 crews will again compete again over the four hours race duration to gain the victory of the day. The race will be even more exciting as it represents the last possibility for testing before the 24h race in May.