Experience wins: Nothing to be done to stop Manthey 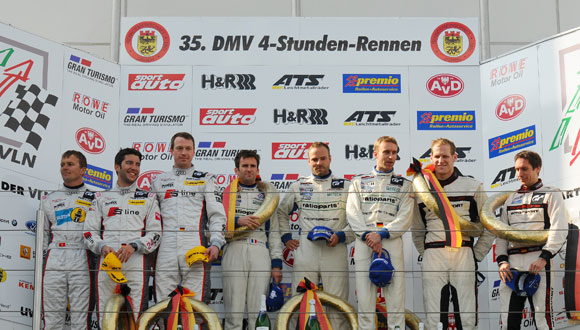 For the second time in a row this year, the most experienced team in the VLN Langstreckenmeisterschaft Nürburgring has dominated the race: Marcel Tiemann (Monaco), Timo Bernhard (Dittweiler/ Germany) and Romain Dumas (France) took the chequered flag in their Porsche 911 GT3 R of Manthey-Racing as race winners after 28 race laps. Their advance ahead of the second placed Audi R8 LMS entered by Phoenix-Racing and driven by Frank Stippler (Bad Münstereifel/ Germany), Marcel Fässler (Switzerland) and Mike Rockenfeller (Austria) was 1:07.364 minutes. Jörg Bergmeister (Langenfeld/ Germany) crossed the finish line only 1.758 seconds later. Together with Wolf Henzler (Nürtingen/ Germany) he thus celebrated a historical success, the first place on the podium for the Porsche 911 GT3 R with hybrid drive. Under springlike temperatures all around the 24.359 kilometres long track combination of the Nürburgring short connection and the Nordschleife, 142 of the 200 starters finished the race.

There was a close battle about the lead until three laps before the end. The last team with drivers Chris Mamerow (Castrop-Rauxel/Germany) and Sascha Bert (Ober-Ramstadt/ Germany), yet, which could still have put the win of Manthey-Racing into question had to stop the race after an accident in the section Schwalbenschwanz. The Audi trio which then became second had achieved pole position in the morning qualifying practice with a time of 8:16.628 minutes set by Fässler. After the start, the race driver from Switzerland had a neck-to-neck fight about the lead with Mamerow and Hans-Joachim Stuck (Austria) in the second Phoenix-Audi. Then Fässler had to come to the pits after six laps only as he realized some problems at the rear axle of his race car. The team was not able to make up the time lost during the pit stop due to the check of the failure until the finish. Stuck and his team mates Dennis Rostek (Porta-Westfalica/ Germany) and Frank Biela (Monaco) retired after 13 laps with technical problems. So everything was clear for the two Porsche of Manthey and Mamerow who from now dominated the action at the top of the field.

“We have deliberately tried today to go a constantly fast pace”, said Tiemann. “I could however reduce the speed a little after the Mamerow Porsche had retired. It was really a fantastic fight up to that moment.” Although Fässler was not completely satisfied with position two, he was quite happy in the end: “I enjoyed this race very much indeed. I thing we have provided fantastic sport together with Stuck and Mamerow in the beginning – hard but always fair.“ This first place on the podium for the Hybrid-Porsche demonstrates that the promising concept of the team from Zuffenhausen works. “We are able to complete up to ten laps in one stint and this in doing almost the same pace as the normal 911 GT3 R”, said Bergmeister happily. “The hybrid system today definitely helped us to save fuel. In addition, it is a great feeling when you notice the extra power provided by the total of the 120 kilowatt strong electronic motors when you accelerate out of the corners or when you are lapping.”

Behind the top three finished the current Champions Christer Jöns (Ingelheim/ Germany) and Sean Paul Breslin (Great Britain), supported by Johannes Stuck (Liechtenstein), in the Audi R8 LMS entered by Black Falcon into fourth place. They were followed by Rodney Forbes (Australia) and Kai Riemer (Leipzig/ Germany) in the quickest Cup-Porsche and into position five. Richard Görannson (Sweden), Stian Sorlie (Norway) and Dirk Müller (Switzerland) took the chequered flag with their BMW Z3 GT3 into sixth place, followed by Klaus Abbelen and Sabine Schmitz (both from Barweiler/Germany) who finished the race in the fastest Porsche of class SP7 (VLN Specials up to 4.000 cc cylinder capacity) in seventh place.

Ford works driver in the World Rally Championship, Jari-Matti Latvala from Finland, finished his first participation at the Nordschleife in third position of class SP4T (VLN Specials up to 2.600 cc cylinder capacity with turbo). The youngest winner ever of a World Rally Championship round competed in the 35th DMV 4-Horus-Race in a Ford Focus RS entered by “FH Cologne Motorsport powered by Ford” together with the two regular lady drivers Anja Wassertheurer (Stuttgart/ Germany) and Daniela Schmidt (Austria). “I did expect the Nordschleife to be great, but my expectations were exceeded by far – a fantastic track”, said a happy Latvala. “The car is brilliant, the team has done a great job and the ambience in this endurance racing championship is simply extraordinary. I will definitely come back.”

With their second class win in SP3T (VLN Specials up to 2.000 cc cylinder capacity with turbo), Elmar Deegener (Stelzenberg/ Germany), Jürgen Wohlfarth (Murrhardt/ Germany) and Christoph Breuer (Nettersheim/ Germany) in the Audi TTS have taken over the lead in the championship classification of the VLN Langstreckenmeisterschaft Nürburgring. Into second championship position follows the Forbes from Australia who won the Porsche-Cup class for the second time in a row.

The third round of the VLN Langstreckenmeisterschaft Nürburgring will take place on 24th April 2010. The 52nd ADAC ACAS H&R-Cup race will be the last race before the 24h Race at the Nürburgring and concludes the first third of the season in this unique racing series at the Nürburgring Nordschleife.