Extra action, double driving fun and a fast-flying Falcon – that was the ROWE 6h ADAC Ruhr Cup race. On Saturday, Falken Motorsports made a big haul on the legendary Nordschleife. Joel Eriksson and Sven Müller in the Porsche 911 GT3 R secured the fourth overall victory in the history of the Nürburgring Endurance Series (NLS) for the team from Offenbach am Main and, at the same time, their first success of their own. Frank Stippler and Vincent Kolb from Scherer Sport Team Phoenix Racing in the Audi R8 LMS GT3 followed with a gap of 1:14.562 minutes, ahead of Christian Krognes, Ben Tuck and Andy Soucek in the BMW M4 GT3 from Walkenhorst Motorsport.

“I couldn’t have wished making a better debut. First race for Falken, and first victory straight away. Sven helped me a lot this weekend with my debut in the GT3 car, which I really enjoyed. I knew it was going to be tough on the track, but not that tough with all the traffic and ongoing overtaking manoeuvres,” said Joel Eriksson.

Things already started really spectacularly. Philip Ellis in the Schnitzelalm Racing Mercedes-AMG GT3 moved up from third to first place already before the first corner. The Munich-born Briton overtook cheekily on the right-hand side of the start-finish straight, almost within touching distance of the concrete wall. The 29-year-old thus delivered his team the first overall lead lap in the NLS. Ben Tuck followed in the Walkenhorst Motorsport BMW M4 GT3. With a time of 7:51.330 minutes, the team had secured pole position achieved by Krognes. The biggest loser in the opening phase was Frank Stippler in the Audi R8 LMS GT3 of the Team Scherer Sport Team Phoenix, who initially dropped from second to sixth place.

50 minutes before that, the top three of the field had been right away hit at Adenauer Forst. The trio of Andy Soucek, Kim-Luis Schramm and Miklas Born skidded off the track on an oil spill. For Born, Marcel Marchewiecz, Marek Böckmann and Philip Ellis in the Schnitzelalm Racing Mercedes-AMG GT3 and Schramm and Jakub Giermaziak in the Scherer Sport Team Phoenix Audi R8 LMS GT3, the journey came to an early end. Soucek lost over a minute in the BMW M4 GT3 and dropped back to fourth. It was Julien Apothéloz who benefited at this moment, driving the Mercedes-AMG GT3 for the Team Landgraf Motorsport alongside Luca-Sandro Trefz and Patrick Assenheimer. The trio ultimately finished fourth. 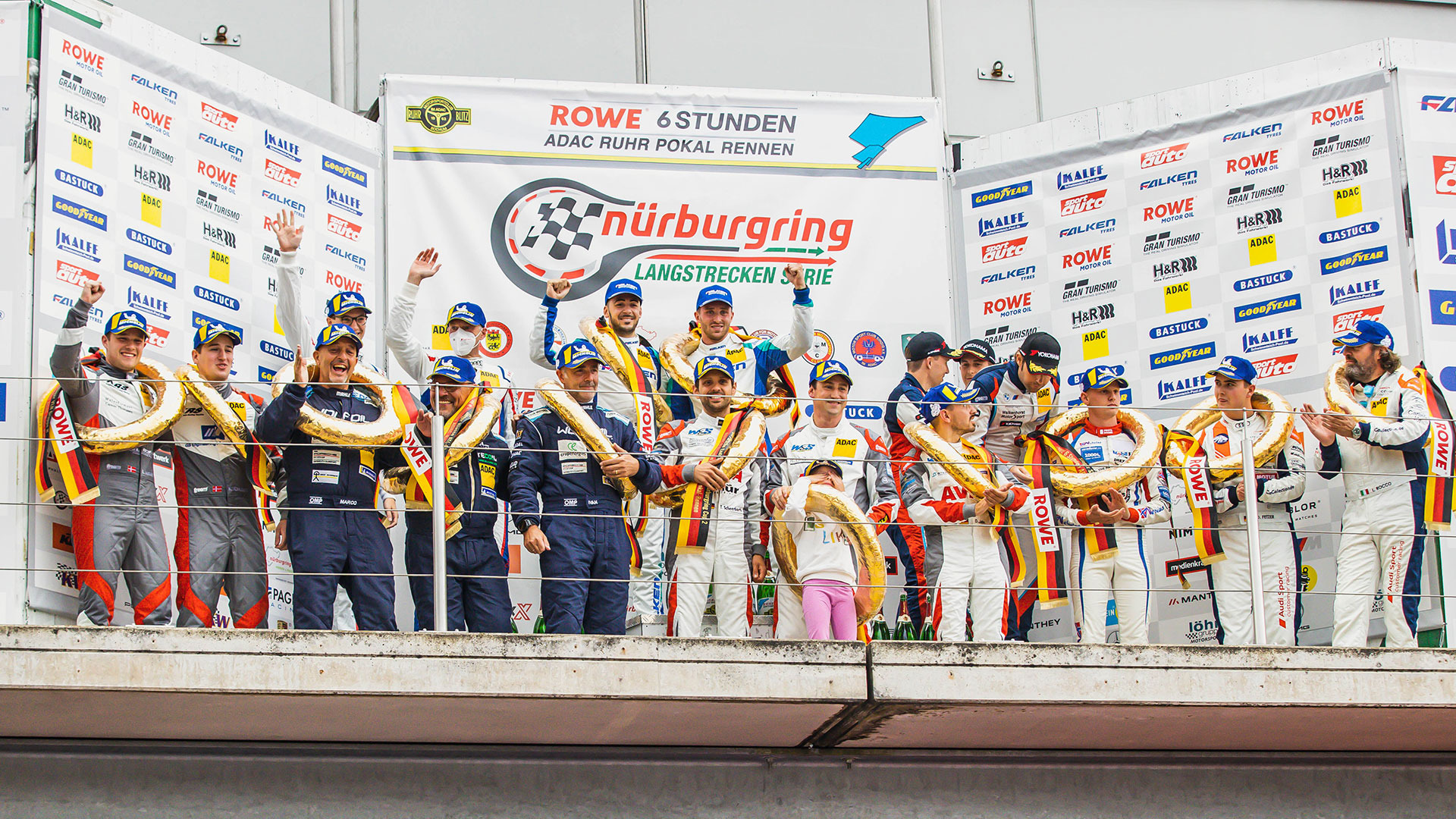 “If you see what happened to us, we have to be satisfied with our third place in the end. When I went off the track, I thought it was game over. Then I sat in the car and did absolutely nothing for 40 seconds, then tried and the car moved. Stippi is always very good at defending. Christian did a great job, he tried everything. He pushed very hard, and that’s when a spin like that happens. In the end, we have to be satisfied,” said Andy Soucek.

“My first victory in the NLS on the Nordschleife feels mega. I have often finished second. The Falken crew definitely deserves this. We had a tough year with many accidents. And now to be on top after a clean race, that feels really good. At Adenauer Forst I was just able to keep control of the car on the oil spill, the others just went off. You can’t see something like that, it was also a matter of luck,” said the victorious Sven Müller.

Thrilling battle between Krognes and Stippler at the end

With just over two hours to go, Joel Eriksson overtook Patrick Assenheimer in the traffic and the Swede steadily extended his lead thereafter. Christian Krognes and Patrick Stippler provided the most entertaining moments in the last hour of the race. The two delivered a determined fight for second place. They swapped positions several times until Krognes briefly lost control of his car shortly before the end and the subsequent 360-degree spin cost him five seconds. The duel was decided. 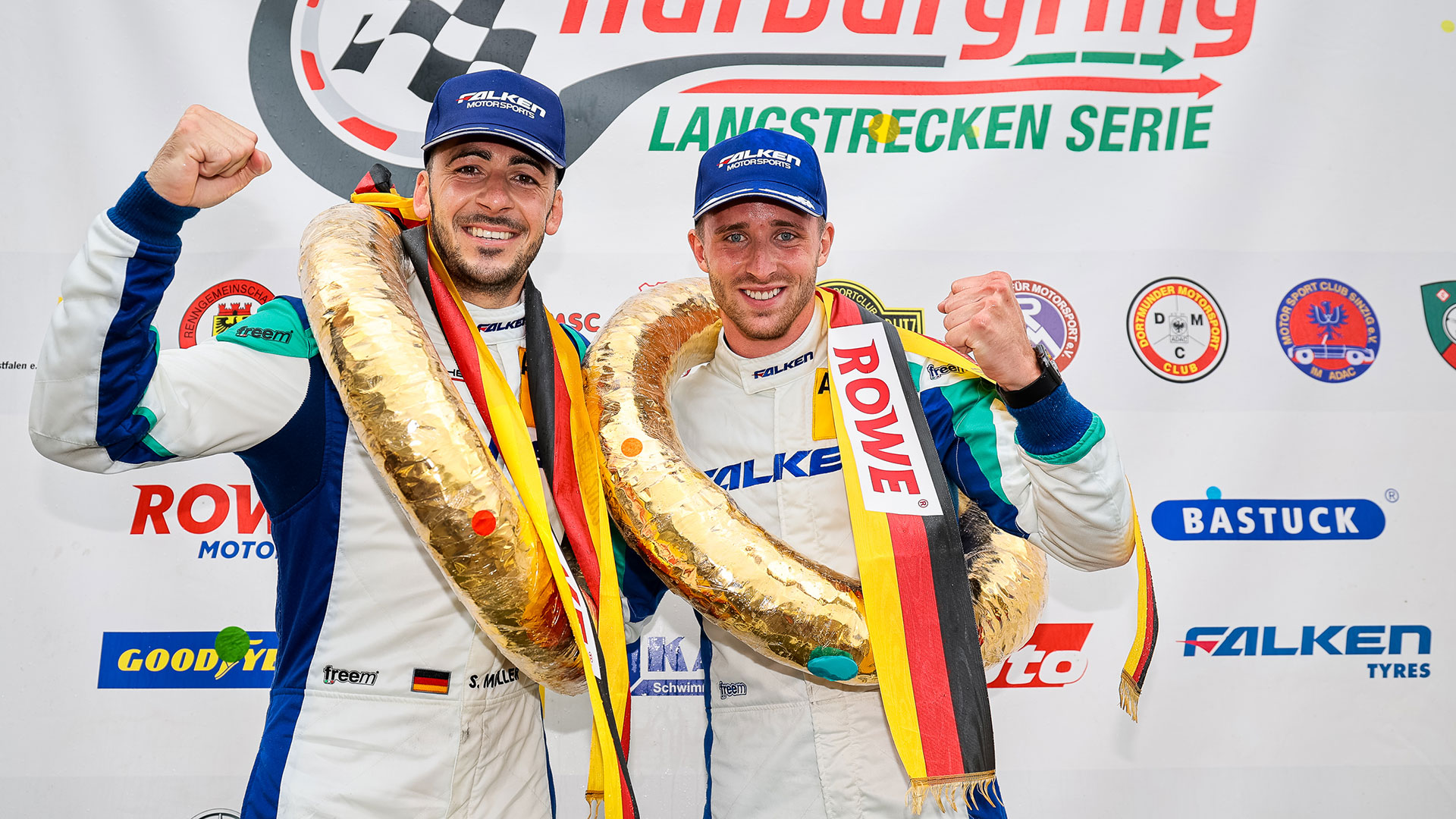 “We overtook each other twice at the Döttinger Höhe. That’s what makes the Nordschleife so particular and it is part of the fascination that you have these slipstream duels here between cars with a similar speed because of the long straight. I saw that he spun. But I also knew he had enough talent to be able to regain control smartly. I was expecting a lead of five or six seconds. But soon I saw the yellow lights in the rear-view mirror again. So there was no chance to take a deep breath”, Frank Stippler described the duel from his point of view and Christian Krognes added: “I gave one hundred percent, I was really determined to finish second. I knew that would be the maximum. I tried everything. On one occasion, I got a little bit off the racing line and I had to pay for that. But I’m also happy with third place.” 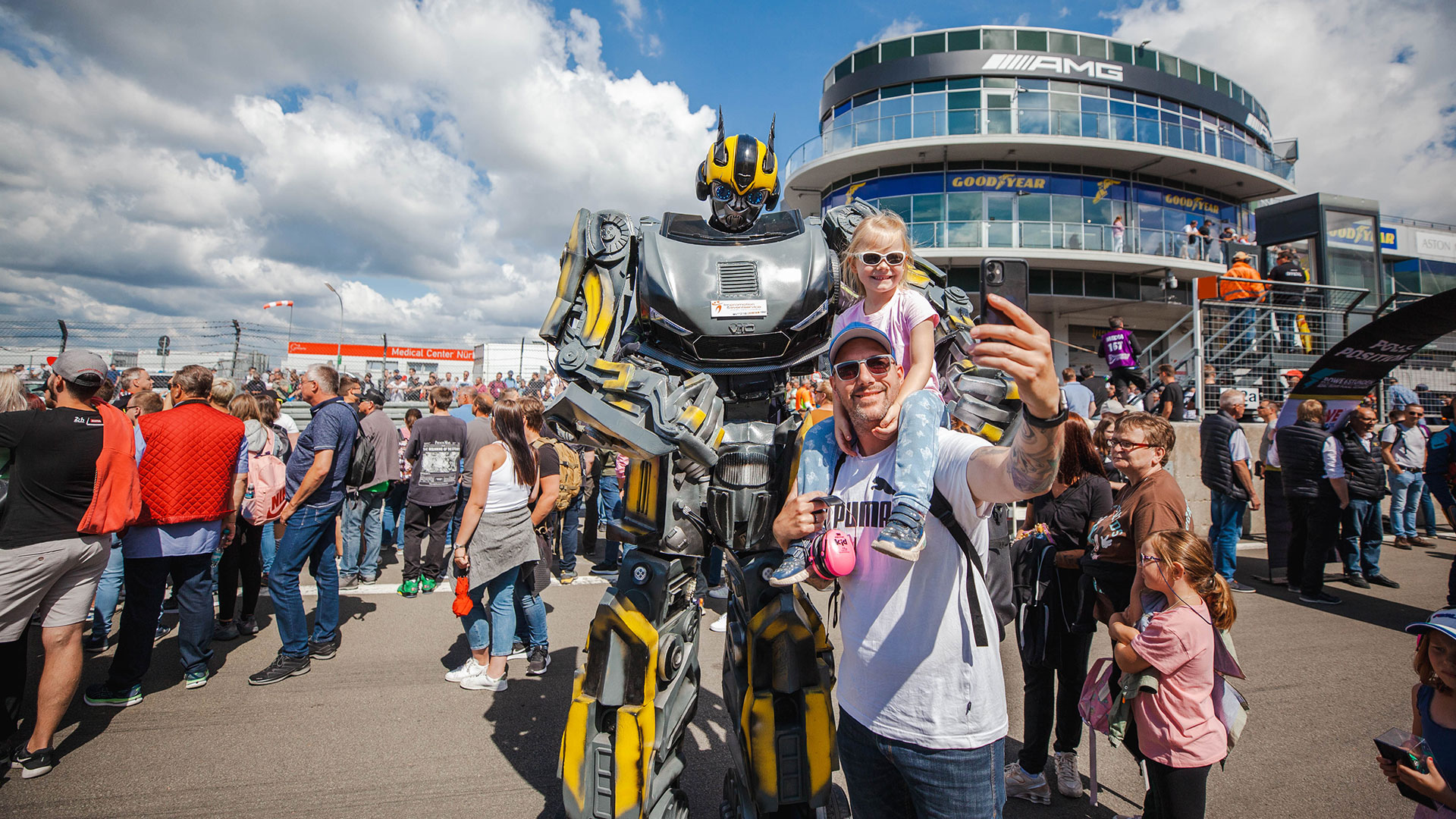 Top ten result for the winner of the Cup 2 class

In the Porsche Endurance Trophy Nürburgring as part of the Nürburgring Endurance Series, a team from the Cup 2 class once again finished in the top ten overall. Class winners Tim Scheerbarth, David Jahn and Daniel Blickle from the Team AVIA W&S Motorsport finished ninth with the Porsche 911 GT3 Cup. Fidel Leib, Philip Miemois, Heiko Eichenberg and Moritz Wiskirchen in the Porsche 718 Cayman GT4 CS of Sorg Rennsport were the fastest in the Cup 3 class. 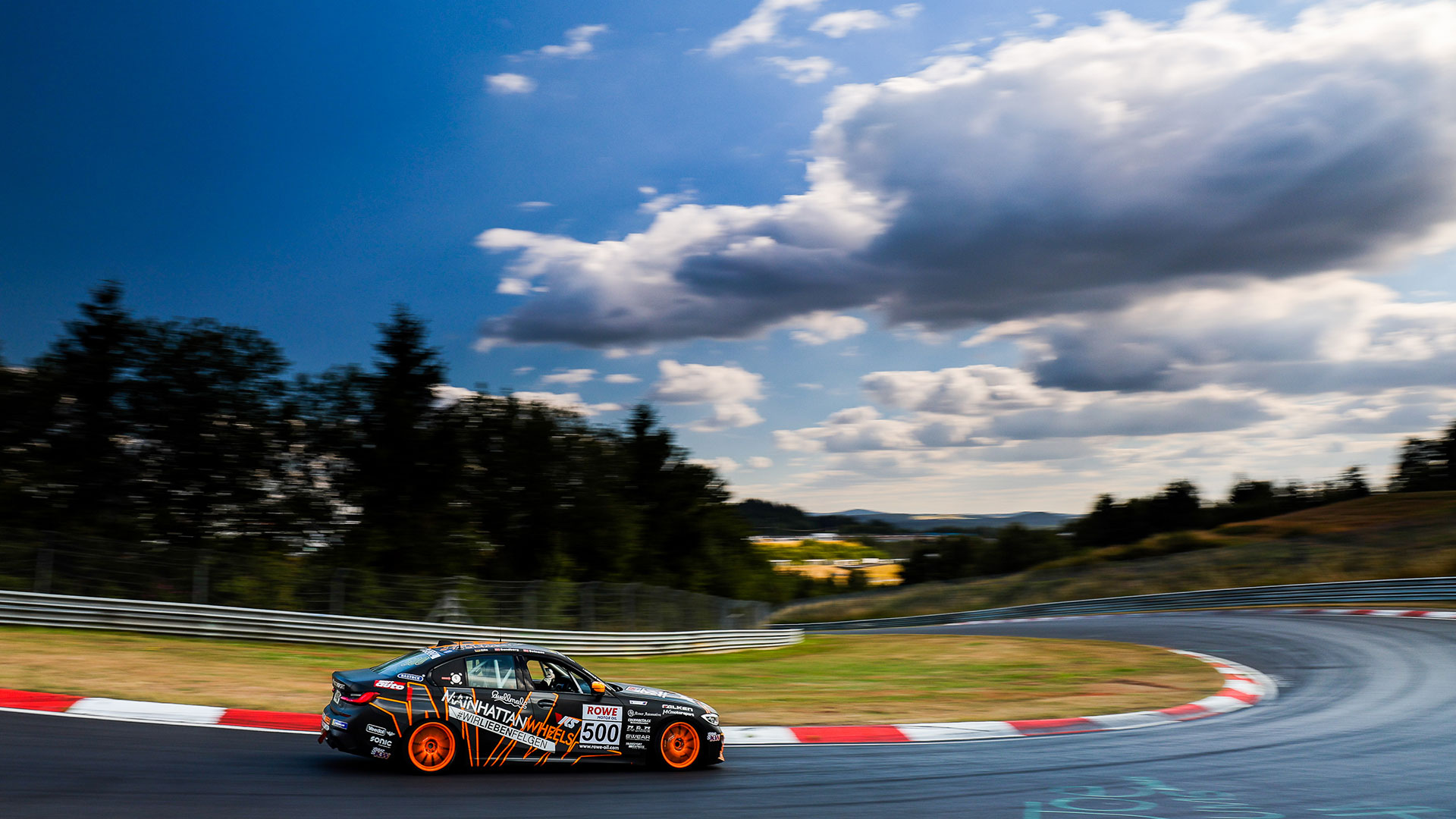 Daniel Zils, Oskar Sandberg and Sindre Setsaas have defended their championship lead in the Nürburgring Endurance Series. The trio of Adrenalin Motorsport Team Alzner Automotive took their fourth victory in the fourth race with their BMW 330i in the VT2-R+4WD class. No other team has achieved anything similar in this season. In second place are Mauro Calamia, Ivan Jacoma and Kai Riemer of Schmickler Performance powered by Ravenol, they finished second in the Cup 3 with the Porsche 718 Cayman GT4 CS (982).

The NLS will continue with the highlight after the summer break. From 9 to 11 September, the 12h Nürburgring will take place for the first time.