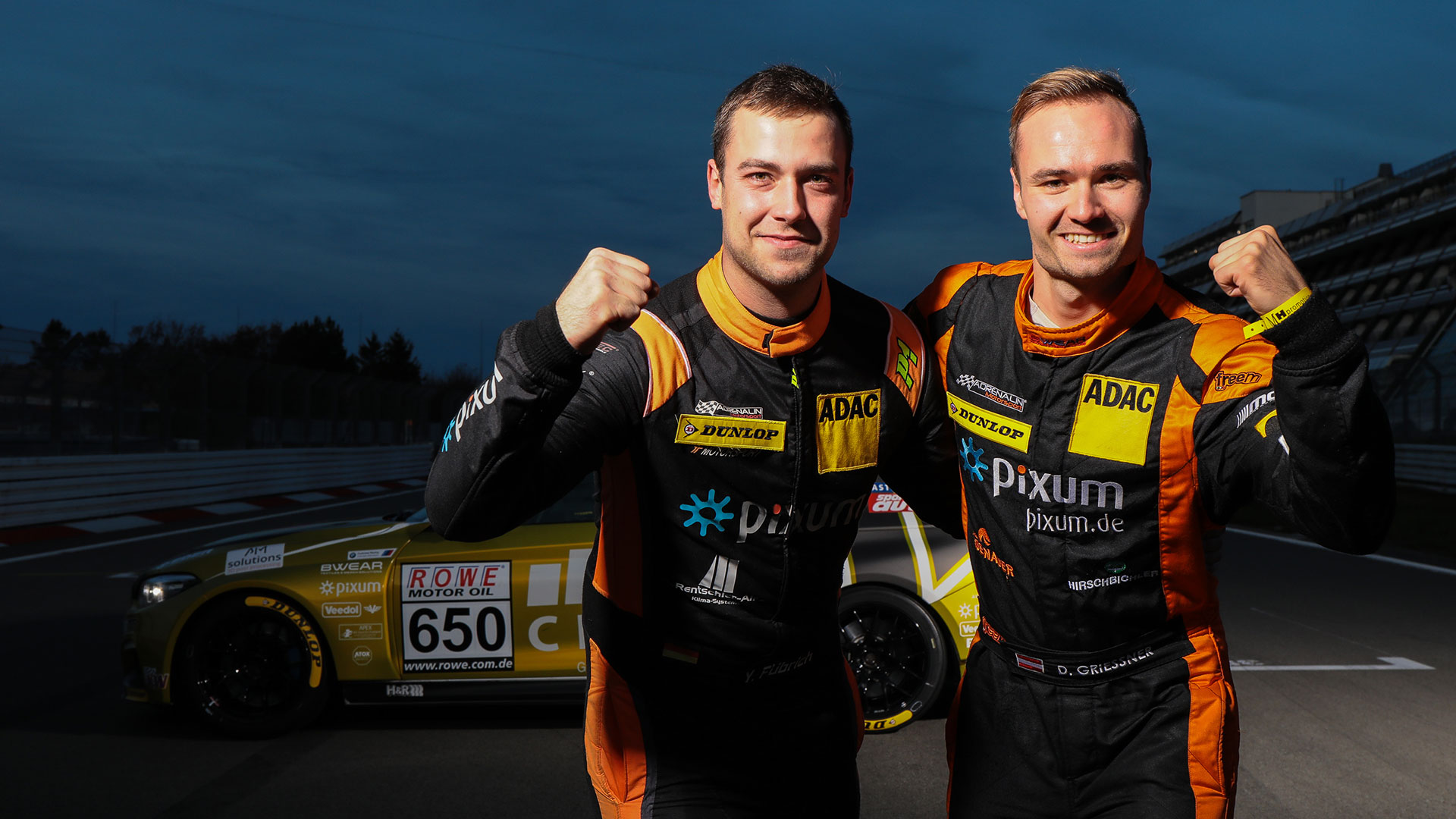 The Pixum Team Adrenalin Motorsport has once again completed an extremely successful VLN season. The new champions are Yannick Fübrich and David Griessner who took their seventh class win in the BMW M240i Racing Cup at the season finale. Thus, they left the rivals – their team mates Philipp Leisen, Danny Brink and Christopher Rink as well as Torsten Kratz, Oliver Frisse and Moran Gott of the Team Avia Sorg Rennsport – behind in positions two and three. Griessner became moreover junior champion, Leisen, Brink and Rink are the winners of the VLN Production Car Trophy. The race winners of the 44th DMV Münsterlandpokal are Patrick Assenheimer and Maro Engel in the Mercedes-AMG GT3 of the Black Falcon Team AutoArena Motorsport.

The title decision was open until the last race, with Fübrich / Griessner in a better position to gain the championship. They started the last round of the season as leaders in the standings. Their challenge was nevertheless to score another good result in order to secure the title. It was specifically at the beginning of the race when the popularity of the BMW 240i Racing Cup with the fans became once again apparent: duels bumper to bumper. “That was really a tough fight”, admitted Fübrich. “You had to be very strong and remain fully focused. To become the VLN Champion with so many strong drivers in the series – I simply do not have the words to describe my feelings.” His team mate Griessner helped him: “That feels really great. I completed the final stint and I felt it was incredibly long. We have been dreaming of such a success for a long time – and now, we’re finally there.” From the Team Principle’s perspective – Matthias Unger himself was VLN champion in the year 2008 – the result did however not come as a very big surprise. “It may sound peculiar when I say that we have planned to defend the title. But that’s true. For sure, you also need that little bit of luck to do so, but we have sent three cars with an excellent driver line-up into the races in three different classes. We finally finished the championship in first, second and fourth place – you can hardly do any better.” The said fourth are Norbert Fischer, Oskar Sandberg and Daniel Zils who celebrated seven victories in class V5 with the Porsche Cayman. 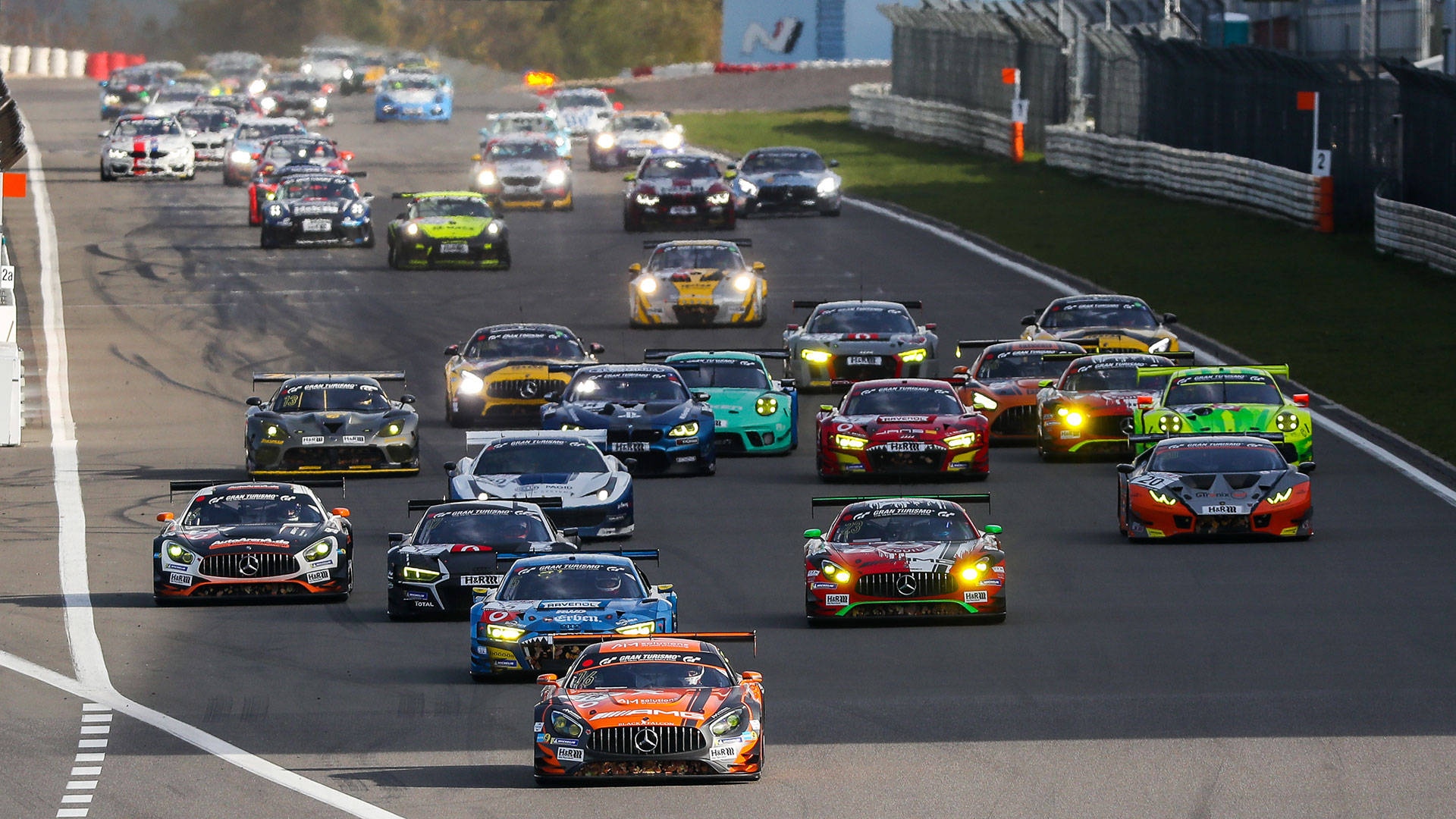 Apart from the title decision, the fight about the last race win, too, was a true thriller. In the last lap, Lars Kern was in the race lead with his Porsche 911 GT3 R of Manthey-Racing when he had a collision with a car that he was about to lap. He still made it to the finish in his damaged nine-eleven called “Grello” but finished only sixth. So Patrick Assenheimer and Maro Engel carried off the victory even though they had already buried all hopes to gain a top-three position due to an unscheduled stop at the beginning of the race. The radiator grill of the Mercedes-AMG GT3 had collected some leaves which had to be removed by the Black-Falcon mechanics after the engine temperature had become too high. “That was something that we had not expected”, said Assenheimer. “Our day had already started quite modestly after our slight collision in the qualifying. Our team made all efforts for us to be able to still complete a fast lap. Then the unscheduled stop in the race after only one lap. That was not very encouraging. In my stint, I had no idea where we were and I was of course positively surprised at the end.”

With the fourth win scored by Assenheimer in the current season, the Mercedes-AMG GT3 with start number 6 took the title in the ROWE Speed Trophy by VLN. Into second position finished the Audi R8 LMS of Phoenix Racing #5. Vincent Kolb and Frank Stippler finished the final race second ahead of Christian Krognes, David Pittard and Jody Fannin in the BMW M6 GT3 of Walkenhorst Motortsport. The top four were completed by Michele Beretta, Steve Jans and Kim Louis Schramm in the second Phoenix-Audi, they also won the Pro-Am classification in SP9. Hubert Haupt, Adam Christoudoulou and Dirk Müller finished fifth in the second Black-Falcon Mercedes-AMG.

The Falken-Porsche of Sven Müller and Patrick Pilet took the chequered flag in second place. Due to a yellow flag infringement, a 185 second penalty was however imposed on the duo after the race so that they are finally only shown in seventh place in the overall classification.
The winner of the VLN Junior Trophy is champion David Griessner who won against the Scheid-Motorsport duo Nico Otto and Lars Peucker. The title in the VLN Production Car Trophy also went to the Pixum Team Adrenalin Motorsport and the previous champions Rink, Brink and Leisen.

Even if the VLN season 2019 is now concluded, there are more dates to be saved. The prizegiving ceremony for the successful drivers and teams of the VLN will take place on 23rd November at the Nürburgring Warsteiner Event Center. One week later, from 29th November to 8th December, the VLN will be present with an exhibition stand in Hall 5 at the Essen Motor Show. The new season 2020 will then begin on 21st March. This will be the 44th season of the biggest grassroots series of the world. Start number 1 will then once again be displayed on a car of the Pixum Team Adrenalin Motorsport. 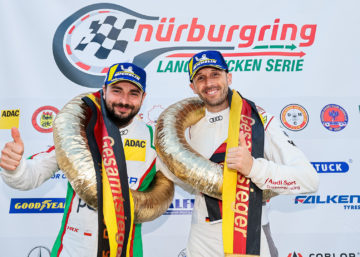 René Rast has already won several prestigious races and titles in his long motorsport career. On Saturday, however, he was finally able to fill a gap in his trophy cupboard....