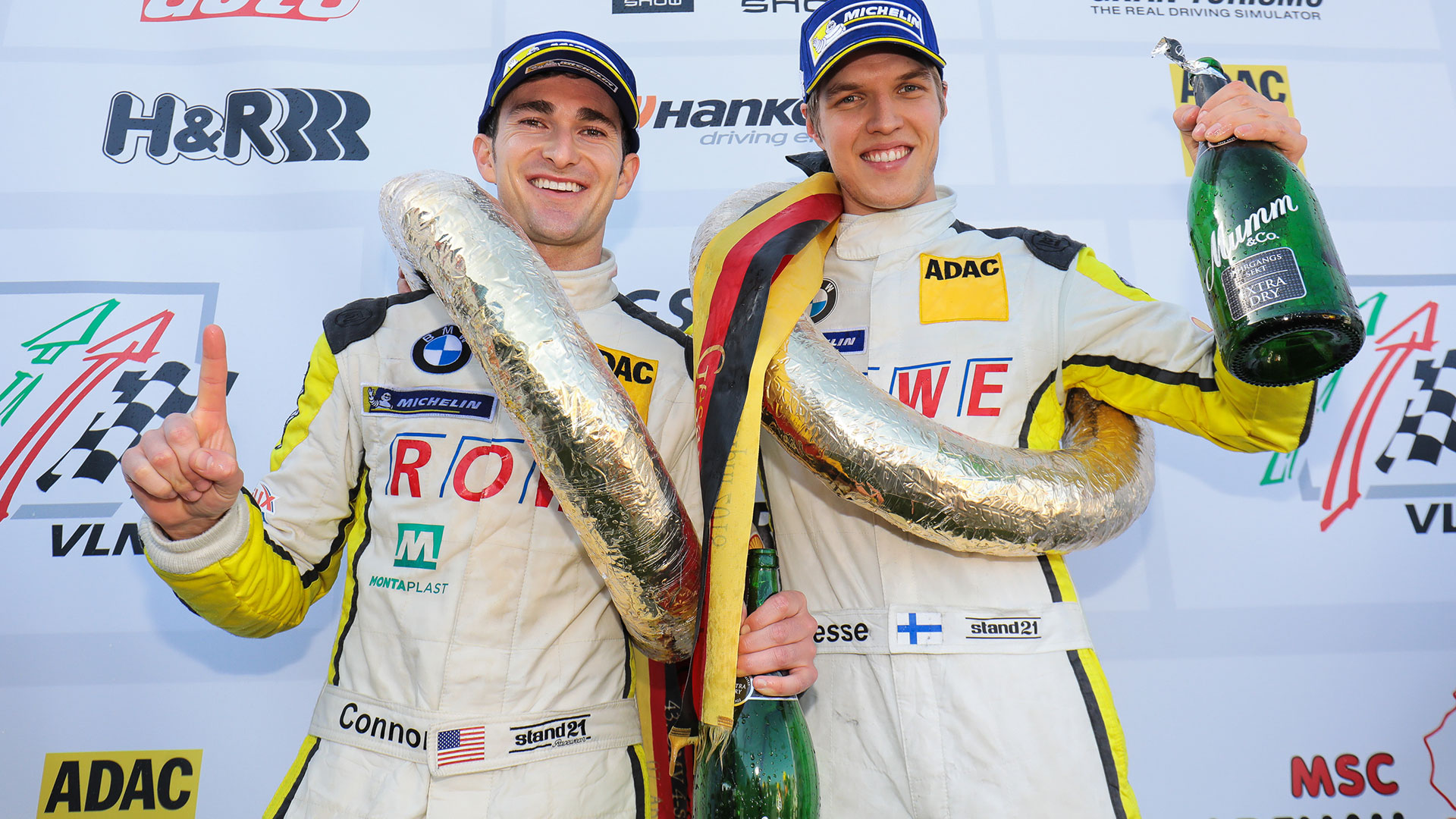 The Nordschleife welcomed the teams at the second VLN round today with bright sunshine and presented itself at its best and the fans experienced a true motorsport festival. Four different makes on the podium at the finish of the 43rd DMV 4-Hour-Race and they were separated by only 19.404 seconds. Jesse Krohn and Connor De Phillippi took their first victory of the season with the BMW M6 GT3 of ROWE RACING. The driver duo crossed the finish line with a gap of 8.789 seconds ahead of Maro Engel, Adam Christodoulou, Manuel Metzger and Dirk Müller in the Mercedes-AMG GT3 of Black Falcon. The top three were completed by Klaus Bachler and Martin Ragginger in the Porsche 911 GT3 R of Falken Motorsport who took their second top three result in a row. Sheldon van der Linde and Marcel Fässler just missed the podium and finished fourth with their Audi R8 LMS of Land Motorsport.

“This result is a dream”, said De Phillippi. Our technical staff got a lot of work to do after our accident yesterday in the setup session.” It was very late when the lights were turned off in the pits of ROWE RACING but their hard work was final rewarded. “We dedicate this victory to our mechanics!” After a rather reserved performance at the season opener, the BMW was very competitive right from the beginning of this second race. “On Friday, we have worked very hard and consistently on both cars, with the main focus on getting the car setup all right. The performance, in particular in the timed practice, was fine. If you don’t have a good start position, you lose so much in the first part of the race that you will hardly be able to catch up during the remainder of the four hours race time.” 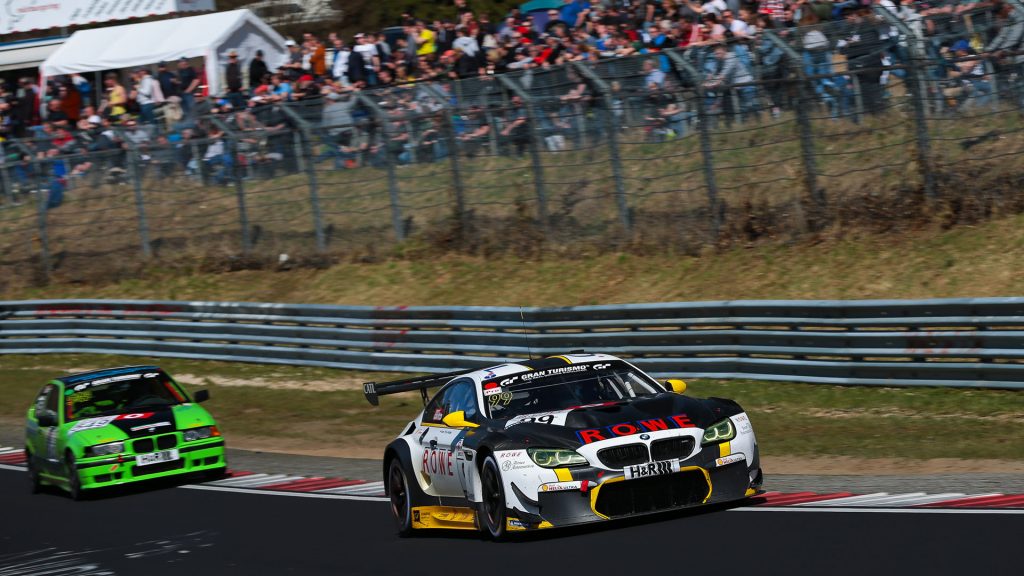 The later winners started the race from seventh position on the grid. The gaps in the qualifying were extremely close this time. The first 22 cars set lap times within a range of only 10 seconds. The pole, however, is never a guarantee for success. Just as already two weeks ago, Laurens Vanthoor in the Porsche 911 GT3 R of Manthey-Racing achieved the fastest time in the qualifying (7:58.951 minutes). In the race, the Belgian was then not very lucky. He lost control of his nine eleven in lap 14 and crashed into the track limitation barriers. He made it back to the pits but the team discovered a damage on the front splitter suspension which could not be repaired on the grounds. 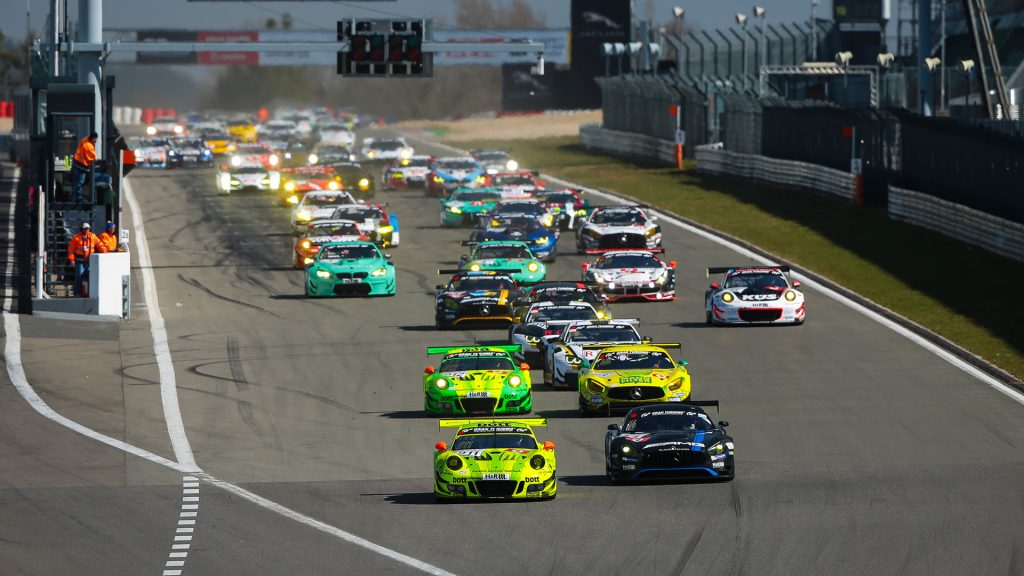 The road was therefore clear amongst others for Black Falcon. “You can believe me that I gave it everything in the last laps to make up the gap to the race leaders”, said Müller. “Unfortunately, it was only enough for second place. One more lap and I would perhaps have been able to catch Jesse. It is nevertheless a top result. If you look at the lap times, the performance of all the cars is quite equal.” The Falken Team became faster and faster throughout the race. “Our tyres are especially sensitive in cold temperatures. That was quite a disadvantage today in the timed practice”, said Ragginger. “We then improved our speed lap by lap during the race. The car is relatively easy to control. So we are hoping for good weather in the upcoming races.”

The Professional cars in class SP9 finished in positions one to ten. The fastest Premium car, driven by Steve Jans, Marek Böckmann and newcomer Fabian Schiller, became eleventh. The Porsche 911 GT3 R of the GIGASPEED Team GetSpeed Performance thus scored a second successful result in a row. The winners of the Masters category were Henry Walkenhorst, Rudi Adams and Andreas Ziegler in the BMW M6 GT3 of Walkenhorst Motorsport.

The fastest car outside the GT3 class SP9 was the Porsche 911 GT3 Cup of Christopher Gerhard and Ralf Schall in class H4. Final driver Schall had to give everything on the last metres to defend their 18th position ahead of the Porsche Carrera Cup class winners. Their advance at the finish were razor-thin 0.967 seconds ahead of Marcel Hoppe, Moritz Kranz and Tim Scheerbarth in the Mühlner-Porsche.

Andreas Gülden from Reifferscheid nearby the Nürburgring realised a true ‘tour de force’. He won the TCR class with the Seat Cupra TCR of mathilda racing as solo driver. After the four hours race time, he relegated Thorsten Wolter, Rudolf Rhyn and Thomas Jäger in their Opel Astra TCR to second place. The three Norwegians Håkon Schjærin, Alte Gulbrandsen and Kenneth Østvold celebrated third position with their Audi RS 3 TCR.

Championship leaders after this second VLN race are Yannick Fübrich and David Griessner of the Pixum Team Adrenalin Motorsport who won the BMW M235i Racing Cup class for the second time in a row. They are followed by Carsten Knechtges and Marcel Manheller in second position who, after their victory at the opening round, this time finished second in class V4.

The VLN will now take a break of eleven weeks before the series will be back with the third round. The 60th ADAC H&R-Cup will take place on 23 June and run over the traditional four hours duration. A number of VLN teams will previously participate in the Nürburgring ADAC Zurich 24h-Rennen (10 to 13 May 2018).