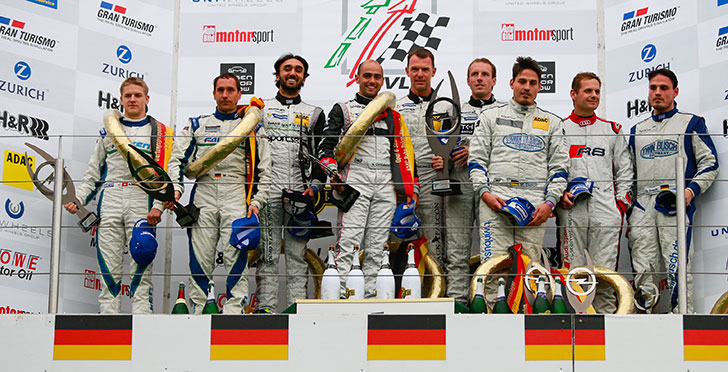 A perfect strategy, an impeccable performance and last but not least fast lap times – those were the essential elements which made the Opel 6h ADAC Ruhr-Pokal race to become a fantastic triumph for the Black Falcon team. After 6:03:37.322 hours, Hubert Haupt, Abdulaziz Bin Turki Al Faisal, Adam Christodoulou and Yelmer Buurman crossed the finish line in their Mercedes-Benz SLS AMG GT3 as winners of this seventh VLN race. The international quartet comprising drivers from Germany, Saudi Arabia, Great Britain and the Netherlands completed 41 laps at the 24.358 kilometres long combination of the Nürburgring short version and the Nordschleife and, with a distance of 998.678 race kilometres, just missed the magical 1000-kilomtres mark. One of the reasons why the distance record of the year 2010 (42 laps = 1023.50 kilometres) could finally not be broken were the changing weather conditions prevailing at the season’s highlight in the VLN endurance racing championship. The advance of the winners at the race end ahead of the second-placed Porsche 911 GT3 R of Falken Motorsports with drivers Wolf Henzler and Alexandre Imperatori was 1:28.870 minutes. Into third place finished Marc Basseng, Dennis and Marc Busch in their Audi R8 LMS ultra. A 30 minutes summary of the seventh VLN race will be shown in channel Sport 1 on 12 September at 17h15.

In particular the first hour of the race provided a lot of excitement. A short rain shower about 30 minutes before the race start made the tyre choice a lottery and the positions were largely mixed up in the first part of the race. The Farnbach Team with drivers Hiroki Yoshimoto, Dominik and Mario Farnbacher who had gained the first pole position for the Lexus RC-F GT3 in the timed practice had decided to fit hand-cut slick tyres. This choice turned out to be wrong, just like for all the other teams who had taken a similar risky decision. In the beginning, the team lost many places before they had to finally retire in lap 25.

Even though the track dried up quickly, the time which the teams affected had lost on their first kilometres could not be compensated despite the race distance was 50 percent longer this time. The Mercedes-Benz SLS AMG GT3 of ROWE-Racing and the one of Black Falcon moved away in the lead and changed to slick tyres after two laps which was the perfect moment. In lap five, the two cars were shown in first and second positions and entered into close fights until half-time of the race, partly separated by less than on second. Unfortunately, the ROWE-SLS of Klaus Graf and Christian Hohenadel, the winners of the previous race, stopped on the track in 23rd lap due to a suspension damage. Black Falcon then easily controlled the race and brought home victory. “Even though it may have looked an easy drive, it was a very tough race indeed”, said Haupt. “In my stint, I had a hard battle over many laps with the ROWE-SLS. That was exciting and I had a lot of fun. I am more than happy about my first VLN victory.”

The Falken team, too, was amongst those unfortunate in the first laps, so they were all the more happy with their final second position. “In the first part of the race, the SLS simply moved away from us”, said Henzler. “The first laps were extremely slippery. Then I realized that the tyres were slowly taking up temperature and I was able to push harder. Our efforts to move up were successful and we are really delighted about second place.” The Busch twins, too, who shared their privately entered Audi R8 LMS together with the 26 times VLN winner Basseng, were satisfied with the running of the race, “After 16th grid position and the unfortunate first part of the race, place three is an excellent result”, said Dennis Busch. “A great feeling to be up on the podium again after all.”

Behind the top three, Nico Bastian and Maro Engel finished fourth in their Mercedes-Benz SLS AMG GT3. Fifth position, too, went to a team relying on the competitive gullwing car, Haribo Racing with drivers Uwe Alzen, Marco Holzer and Mike Stursberg. In sixth and seventh places respectively finished Michela Cherruti, Felipe Fernández Laser, David Jahn and Victor Bouveng in the BMW Z4 GT3 of Walkenhorst Motorsport powered by Dunlop and the Porsche driver duo of Manuel Metzger and his team mate driving under the pseudonym ‚Gerwin’, entered by the Black Falcon Team TDM Friction. Porsche drivers Marc Hennerici and Christian Menzel, driving for Raceunion Teichmann Racing, were classified eighth. The winner in class SPX and finishing ninth overall was the Scuderia Cameron Glickenhaus with the SCG003C. The spectacular race car manufactured at the own design of automobile enthusiast James Glickenhaus from the United States was driven by Franck Mailleux, Andreas Simonsen, double starter Felipe Fernández Laser and Thomas Mutsch who completed 40 laps.

The event organised by the MSC Ruhr-Blitz-Bochum was dominated by the Blitz logo of the make of Opel. So the drivers of the OPC Cup organised by the car manufacturer from Rüsselsheim were particularly motivated. The class win was once again scored by Hannu Luostarinen, Heinz-Otto and Jürgen Fritzsche who thus further extended their championship lead on the one-make cup with this fourth success in the year 2015. Olaf Beckmann, Peter Hass and Volker Strycek, too, had a brilliant result in celebrating another class win with their comparatively old Opel Manta. The cult coupé was badly damaged at the penultimate race in an accident which was not their fault and the crew around team manager and driver Beckmann took huge efforts in the last weeks to bring the car back to the starting grid in time for this season’s highlight. Their engagement was rewarded.

With the eighth race in the VLN endurance racing championship Nürburgring on 3rd October, the last third of the season 2015 will begin. The 55th ADAC Reinoldus-Langstreckenrennen will run over the traditional four hours race duration.