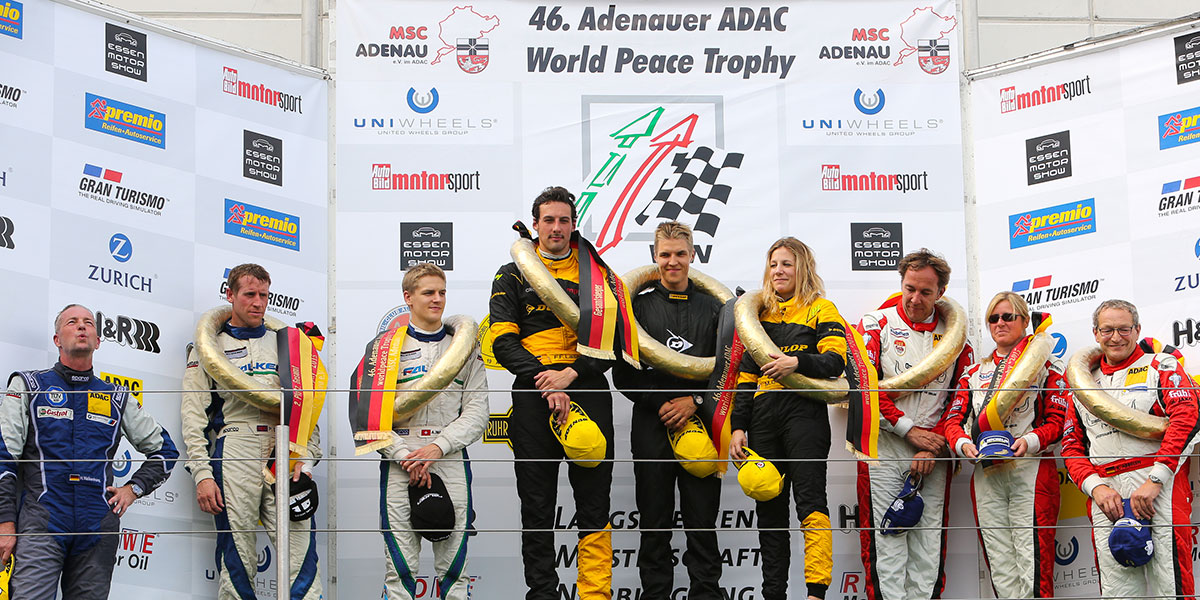 The 46th Adenauer ADAC Worldpeace Trophy race will go down in the history of the VLN endurance racing championship Nürburgring as one of the hottest races. Temperatures rising to clearly over 30°C brought both man and material to the limits of their capacities in the indeed already highly demanding ‘Green Hell’. The winners of the Team Walkenhorst Motorsport powered by Dunlop, too, will remember this special race for long. The private racing team from Melle / Germany celebrated its first victory ever with the driver trio Michela Cerruti (Italy), Felipe Fernándes Laser (Leipzig/ Germany) and Jesse Krohn (Finland). Moreover, Cerruti is the second women only who was able to climb up on top of the podium in the 39 years history of this unique racing series at the Nordschleife. Behind the BMW Z4 GT3 finished Peter Dumbreck (Great Britain) and Alexandre Imperatori (China) in the Porsche 911 GT3 R entered by Falken Motorsports in second position. The podium was completed by Sabine Schmitz, Klaus Abbelen (both from Barweiler/ Germany) and Patrick Huisman (Netherlands) in the GT3 nine eleven of the team Frikadelli Racing who again finished on the podium after the had scored the 200th victory in a Porsche in the last race of the series. A 30 minutes summary of the fourth VLN race will be shown in channel Sport1 on 11th July at 12h34.

“We cannot believe it yet, an incredible feeling”, said team manager Walkenhorst who himself finished ninth in the sister car of the race winners. “The VLN has been our home since many years and we are now celebrating our first win. A moment that we will definitely remember for long.” Throughout the complete four hour duration of the race, the winning team in particular convinced with constantly fast lap times, a successful strategy and their BMW Z4 GT3 running without any problem. For the sports coupé from the Munich manufacturer, this was the fifth win in the VLN. “Our car of course is of known quality and especially under these temperatures, our tyres are working perfectly”, said Laser. “Moreover the team spirit in our driver trio is perfect – fast but always keeping an eye on the fuel consumption.”. 28 years old Italian Cerruti added: “I am very proud to be the second woman now after Sabine Schmitz to win a VLN race. Anyhow, now we know how it works and I hope that we will continue this way.”

Cerruti received a lot of praise for her successful premiere on the podium by the uncontested ‚First Lady‘ at the Nürburgring, Sabine Schmitz: „I am really happy for Michela. The more women we have on the podium in the endurance championship, the better.” Concering her own race, the local hero said: “That was a hard race today. It was all the more important that our Porsche today was comfortable to drive which was of particular importance under these conditions. Position three is a fantastic result. The crew finishing second, too, had to struggle with the high temperatures. Moreover, after an accident in the timed practice, Dumbreck complained about pain in the wrist. “That was, however, not a problem in the race – the heat definitely was much worse. It was really exhausting.” With their excellent second place, the Team Falken Motorsport tied in with their podium position at the 24h Race at the Nürburgring. “That was very important and I hope that we will score our first win very soon. The team has deserved it finally.”

A lot of attention attracted the debut in racing of the Mercedes-AMG GT3. Bernd Schneider (Switzerland), who shared the cockpit of the brand new GT3 race car with Thomas Jäger (Munich) and Jan Seyffarth (Leimbach/ Germany), gained pole position with his fastest lap at 8:02.897 minutes. In the first part of the race, the drivers were competing in the leading group but then had to come for an unscheduled pit stop due to a broken wheel bearing. The Mercedes-AMG team used the remaining time to get further experience in collecting additional data. “I am very happy and this was definitely not our last participation in the VLN”, said Tobias Moers, CEO Mercedes-AMG, who had come to the Nürburgring himself to see the racing debut on-site. The two new Lexus RC F GT3, too, made their debut in racing at the Nürburgring endurance racing championship. With 28 laps each, they completed the same number of laps as the race winners and finally finished in eleventh and twelfth places.
After four of ten races, the 2013 champions, Dirk and Tim Groneck (both from Melle/ Germany), have now gone in the lead of the endurance racing championship. The brothers achieved their third class victory in the class of VLN Specials up to 2,000 cc cylinder capacity.

The fifth round of the VLN endurance racing championship Nürburgring, the 47th ADAC Barbarossapreis, on 1st August will conclude the first half of the season. The race will be running over the usual distance of four hours on the 24.358 kilometres long combination of the Nürburgring short version and the Nordschleife.