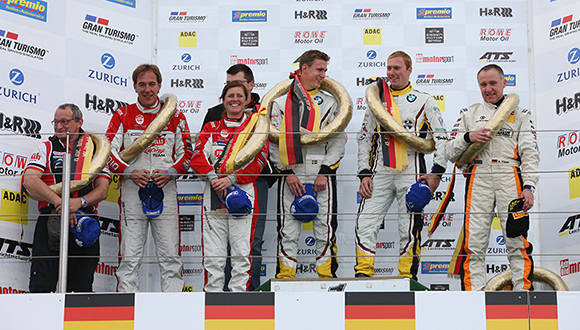 The seventh round of the VLN endurance racing championship at the Nürburgring was hard to top in two respects: Bright sunshine throughout the whole race over the distance of four hours and the great number of fans all around the Nordschleife could experience exciting and top-class motor sport action at the ‘Green Hell’. The sporting highlight of the day was provided by Maxime Martin (Belgium) and Nicky Catsburg (Netherlands) in the BMW Z4 GT3 of the BMW Sports Trophy Team Marc VDS. The driver duo succeeded against their competitors in the very final part of the race only and crossed the Line in first position. Their advance ahead of the second placed team with Klaus Abbelen, Sabine Schmitz (both from Bahrweiler/ Germany) and Patrick Huisman (Netherlands) in the Porsche 911 GT3 R entered by the team MSC Adenau was 53.710 seconds. The top three were completed by the two drivers of the Team Dörr Motorsport, Rudi Adams (Ahütte/ Germany) and Arno Klasen (Karlshausen/ Germany) who both were so happy to thus celebrate the by far best result for McLaren in the VLN since they made their debut in the MP4 GT3. A 30 minutes summary of the 45th ADAC Barbarossapreis will be broadcasted in channel Sport 1 on 5 October at 18:00hrs.

The seventh race started with a bang. With a time of 8:01.069 minutes achieved in the timed practice, Uwe Alzen (Betzdorf/ Germany) gained pole position in their BMW Z4 GT3. This represents a new, unofficial record on the new VLN track version, lap records are only counted in race. An exciting battle about the leading position started right after the start. The race lead changed between Jochen Krumbach (Eschweiler/ Germany), Marco Holzer (Lochau/ Germany) and Lucas Luhr (Switzerland) in the Manthey-Porsche, the Alzen-BMW, the Porsche driven by Abbelen / Schmitz / Huisman, the Mercedes-Benz SLS AMG GT3 of the team ROWE Racing as well as Dennis and Marc Busch (both from Bensheim/ Germany) in their Audi R8 LMS. Throughout the further running of the race, some of the protagonists were however left behind. Alzen went off the slippery track at the section Eschbach and crashed into the guardrails. Jan Seyffarth (Querfurt-Leimbach/ Germany) and Lance David Arnold (Duisburg/ Germany) in the ROWE-SLS got the penalty of a lap cancellation after they had exceeded the maximum speed in an area of danger and finally finished in eleventh place. The Manthey Porsche in the lead retired about 15 minutes before the race end due to a damage in the drive system and the Busch twins in second place stopped their car when they ran out of fuel in the last lap. The next three teams moved up and finished on the podium after the retirements of their competitors.

“In the end, we were of course quite lucky”, admitted the Belgian Martin. “But we’ve had a good race and deserved the victory. The BMW was running perfectly, our strategy was superb and I must above all express a big compliment to my team mate Nick who has shown a fantastic performance at his debut at the Nordschleife.” For Marc VDS and for the two drivers, this was the first win in the endurance racing championship and for BMW it represented overall victory number 35 in the history of this grassroots series.

“Simply fantastic”, said a happy Sabine Schmitz. “We are very delighted about our second place; our Porsche was running like clockwork.” Her team mate Huisman praised in particular the performance of Abbelen who has greatly contributed to the success with his fast lap times. “Klaus had a brilliant stint. He has enhanced his performance so considerably in the last races.“ A big relief experienced also Klasen for whom the first result on the podium meant a great satisfaction. “The whole team never stopped believing in the project despite all the setbacks and is now recompensed with the first great success. Sometimes you need that little bit of luck and we’ve really had such a lot of bad luck so far. Now, we need to go some steps further to move up to the top but first of all, we are going to celebrate that result.” Two other teams behind the top three celebrated their best result of the season: Jürgen Alzen (Betzdorf/ Germany) and Artur Deutgen (Spain) in a Ford GT into fourth position, followed by Pierre Ehret (Tegernsee/ Germany) and Alexander Matschull (Bad Homberg/ Germany) who finished the race fifth despite this was their only second race participation with the Ferrari F458 of the team GT Corse in class GT3.

The situation in the championship is coming to a dramatic head two races before the end of the season. Dirk and Tim Groneck (both from Melle/ Germany) took their sixth victory in the Renault Clio Cup class and defended their championship lead with a score of 60.98 points. Their two pursuer teams with Christoph Breuer (Nettersheim/ Germany) and Elmar Deegener (Stelzenberg/ Germany) in the Audi TT RS 2.0 of the team Raeder Motorsport as well as Michael Jacobs (Roetgen-Rott/ Germany), Oliver Kainz (Kottenheim/ Germany) and Georg Weiss (Monschau/ Germany) of the Wochenspiegel Team Manthey are ex-aequo in second place after seven championship races. The gap to the leaders is only 0.23 points. Rolf Derscheid (Much/ Germany) and Michael Flehmer (Overath/ Germany) have now moved into third position with their BMW 325i after they had scored the sixth win in the class of VLN Specials up to 2,500 cc cylinder capacity. They are now also in the lead of the VLN Series Production Car Trophy.

The eighth round of the VLN endurance racing championship Nürburgring will take place in two weeks time. The ROWE DMV 250-Miles-Race will start on 12 October and run over the usual distance of four hours.