25 VLN races up to the first championship lead 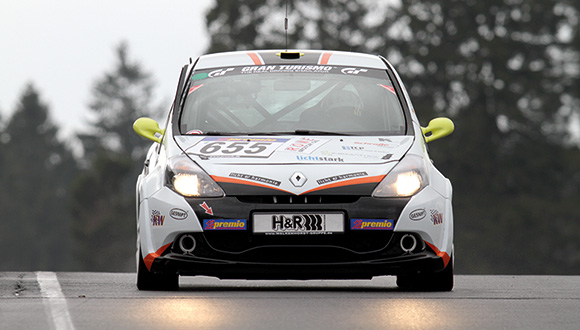 The story of Dirk and Tim Groneck (both from Melle/ Germany) is an example for the VLN endurance racing championship and underlines in an impressive way the series’ grassroots character which has since many years been promoted by the series organisers on a very high level. The motor sport career of the brothers comprise only 25 races in this long distance series. They have nevertheless succeeded in taking the lead of the championship at the last race.

„That is a real hit“, says Tim Groneck. “We knew at the start of the year that the season could go quite well for us and our target was to achieve a position in the top ten. That we are now finally fighting about the title in the championship is absolutely fantastic. We would never have expected that.” With their Renault Clio, the team won their class five times in six races and went thus ahead of Christoph Breuer and Elmar Deegener who had been in the lead for a long time with their Audi TT RS 2,0.

Dirk and Tim Groneck had been active and gaining experience in karting for more than 20 years. In 2008, they made the step to compete at the Nordschleife in entering the RCN performance test series – with moderate success as they suffered many technical problems. The tide should turn when they purchased a used Cup Clio. First successful results were scored quickly when they started to participate in the VLN endurance racing championship. They further advanced and achieved top results this year. “We do not have the strongest car in our class but we manage to maintain a constant and quick performance throughout the distance”, says Dirk Groneck.

The racing brothers have meanwhile achieved their original target to once take part in the 24h Race at the Nürburgring. And they do not yet want to waste any thoughts on becoming the champions. “We will simply continue as before and see where we are in the end”, says Tim Groneck. “It is a fact that the other teams are more exposed to pressure than we are.”

Dirk and Tim Groneck wish to score another top result at the 45th ADAC Barbarossapreis on 28 September with the race running over the usual distance of four hours.