Exciting racing action: Audi wins ahead of BMW and Porsche 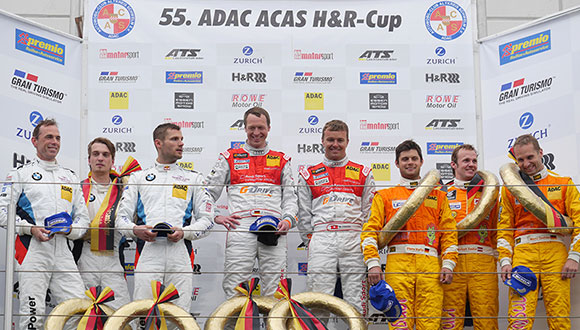 The second round of the VLN endurance racing championship Nürburgring was a really difficult race. Under extremely difficult weather conditions, the total of 210 cars took the start to the 55th ADAC ACAS H&R Cup race. At the end of the four hour race, Marcel Fässler (Switzerland) and Frank Stippler (Bad Münstereifel/ Germany) took the chequered flag in their Audi R8 LMS ultra entered by Phoenix Racing into first place. Their advance ahead of the BMW Team Schubert and the BMW Z4 GT3 driven by Dirk Adorf (Michelbach/ Germany), Martin Tomczyk (Kolbenmoor/ Germany) and Jens Klingmann (Leimen/ Germany) in second place was 59.030 seconds. The top three were completed by Pierre Kaffer (Schlieren/ Germany), Norbert Siedler (Austria) and Marco Seefried (Wemding/ Germany) in a Porsche 911 GT3 R. With this third place, Timbuli Racing has already achieved their second result on the podium in the current season of this most popular grass roots series in Europe. A summary of the second race will be broadcasted in channel Sport1 on 4th May at 12:00hrs.

The pole position in the timed practice with the time of 9:53.728 minutes was gained by Uwe Alzen (Betzdorf/ Germany) who was driving the BMW Z4 GT3 entered by H&R Spezialfederen GmbH & Co together with Philipp Wlazik (Gladbeck/ Germany) and Alexandros Margaritis (Cologne). He thus clearly dominated all of his competitors with an advance of more than 15 seconds. The team, however, got a penalty of a drop of five grid positions because Race Control had noticed a speeding under double yellow flags. But this penalty did not prevent the Alzen Team from dominating the race over long distances. The black-yellow race car from the Westerwald region was in the race lead for almost 50 percent of the whole distance. After a drive-through-penalty inflicted on the crew because of non-compliance with the minimum pit stopping time, they finally dropped back into seventh position. Whilst the top three positions were largely fixed towards the race end, an exciting battle was going on about fourth position towards the race end. Frikadelli Racing with drivers Sabine Schmitz (Barweiler/ Germany), Patrick Huisman (Netherlands) and Patrick Pilet (France) finally won the fight in their Porsche 911 GT3 in the last lap against Stefan Mücke (Berlin) and Darren Turner (Great Britain) who competed in an Aston Martin Vantage GT3. Christopher Brück (Cologne) and Jaap van Lagen (Netherlands), who finished in an excellent second place at the opening round, in the second Timbuli Porsche had to be satisfied with place six, together with Marc Hennerici (Mayen/ Germany). “We’ve had a perfect race”, said Stippler. “In addition to the speed, the strategy was of significant importance in the race – and our plans turned out to work very well today. We both set constant fast lap times. In the end, luck was perhaps also on our side“. Second placed Adorf gave a big compliment to the discipline in the field after the start. “The weather conditions at the start were really critical. But the driving discipline was absolutely great so that there were no big incidents”. After the sunny VLN opening round, his team mate Tomczyk was particularly happy about the opportunity of this final test before the 24h Race under such difficult conditions. “I hope that we will be as successful in three weeks time as we have been today”, said the DTM driver. “Despite the weather, it was a fantastic weekend for us as we were able to work on the setup of our Z4 GT3 under wet conditions, too. Again, I was very happy to compete in the VLN and I am now so much looking forward to the 24h Race.” The driver trio in the Timbuli team really managed to accomplish a tour-de-force in moving from 29th grid position up into third place and on the podium. “That was a really brilliant performance today of all three drivers”, said Kaffer who used the race to get used to the nine eleven of the team from Wiesbaum/ Germany. “First of all, I had of course to get used to the car and the tyres. However, I managed this pretty well in particular during the race so that I was able to use my set of tyres perfectly.”

The first class win of a hydrogen driven race car in the VLN endurance racing championship Nürburgring will certainly go down in history. Ulrich Bez (Great Britain), Wolfgang Schuhbauer (Brilon/ German) and Mathew Marsh (Hongkong) in the Aston Martin Rapide S completed 18 laps in the ‘Green Hell’. Ralf Schall celebrated his 75 class victory. Together with his father Andreas (both from Dornstadt/ Germany), he did not only win his class H3 in the quite old, former DTM Mercedes, the team was also the winner in group H. For Schall senior, this represented the 74th success. The extremely competitive class Cup 1 with the Opel Astra OPC Cup vehicles was dominated by multiple VLN champion Wolf Silvester (Nürnberg/ Germany) and Mario Merten (Kelberg/ Germany). The driver duo won the exciting fight in the last part of the race against the Cup experts Jannik Olivo, Elmar Jurek (both from Berlin) and Alexander Schula (Hatersheim/ Germany). The class of TMG GT 86 cars was won by Arne Hoffmeister (Lutter/ Germany), Arno Klasen (Karlshausen/ Germany) and Wolfgang Kudrass (Lohmar/ Germany). The first participation with the TMG GT 86 of Toyota Motorsport in class V3, whereby the team is made up of volunteers of TMG investing their leisure time for competing in races, turned out to be a great success for drivers Moritz Oestreich (Petersberg/ Germany) and Sebastian Koch (Müsch/ Germany). The driver duo right away finished in fourth class position.

The ADAC Zurich 24h Race on the weekend of Whitsuntide will mark the highlight of the season at the Nordschleife for a great number of the VLN teams. The third round of the VLN endurance racing championship Nürburgring, the 44th Adenauer Simfy Trophy, will then take place on 22 June. The programme will again include four hours of exciting racing action at the most beautiful and demanding race track of the world.