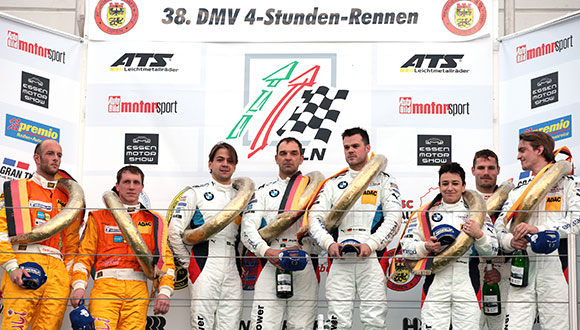 With the 38th DMV 4 Hour Race organised by the team of the RG Düren, the VLN endurance racing championship Nürburgring had a splendid start into the new season. Dirk Müller, Jörg Müller (both from Switzerland) and Augusto Farfus (Brazil) in their BMW Z4 GT3 of the BMW Team Schubert were the happy winners at the end of the 4 hours race distance. Into second place finished the team of Timbuli Racing with drivers Christopher Brück (Cologne) and Jaap van Lagen (Netherlands) in a Porsche 911 GT3 R. The podium was completed by Claudia Hürtgen (Munich), Martin Tomczyk (Switzerland) and Jens Klingmann (Leimen/ Germany) in the second Z4 entered by Schubert. The total of 206 race cars had started the practice at the opening round in the ‘Green Hell’ and in the bright spring weather a huge number of fans of this popular grass roots racing series had come to the Nürburgring to follow the action on-site. A summary of this first race of the VLN endurance racing championship Nürburgring will be shown in channel Sport1 on 20 April at 10:45hrs.

The race was initially dominated by the Frikadelli Porsche driven by Klaus Abbelen, Sabine Schmitz (both from Bahrweiler/ Germany) and Patrick Huismann (Netherlands) who had started the race from pole position. After a collision, which was not their fault, with a car to be lapped, the Porsche 911 GT3 R went off into the gravel in lap 19 and had to retire from the race. The BMW Z4 GT3 entered by the team H&R Spezialfedern GmbH & Co and driven by Uwe Alzen (Betzdorf/ Germany), Philipp Wlazik (Gladbeck/ Germany) and Alexandros Margaritis (Cologne) was also found in the race lead for some parts. Finishing the practice into fourth place, the driver trio finally took the chequered flag after the race in fifth position. The final part of the race was characterized by the extremely close fight between the two Schubert BMW and the Timbuli Porsche which started the final lap within a gap of only few seconds. Müller, Müller and Farfus finally dominated the battle and finished with an advance of 15.029 seconds ahead of Brück and van Lagen who achieved second place in the last lap. The gap to Hürtgen, Tomdzyk and Klingmann into third place was only some razor-thin 0.589 seconds.

“When the issue Nordschleife came up in the BMW team, there was no need at all to convince me”, said Farfus. “It is always a great pleasure to compete at this unique race track. And if you win, the excitement is of course even greater. It has been years since I competed at the Nordschleife for the last time and furthermore, this was my first race in a Z4 GT3. But I felt very well in the car right from the beginning.” His DTM make colleague Tomczyk, too, was full of praise for the sports coupé from Munich. “It is great fun to drive this car. It was a fantastic start to finish the race with both cars on the podium. I also like the ambience in the VLN very much – this is the basis of motor sports”. Brück was very happy with their second place: „Our target was to finish the race and to gain experience with the new GT3-R race car. Position two is a brilliant debut in my new team which has made a brilliant job. I was able to push and attack at all times“. The sister car with drivers Marco Seefried (Wemding/ Germany) and Norbert Siedler (Austria) finished in fourth place and completed the excellent result for Timbuli Racing.

Behind the group of the top 5, Jochen Krumbach (Eschweiler/ Germany) and Marco Holzer (Lochau/ Germany) in the Porsche 911 GT3 RSR of the team Manthey-Racing finished in sixth place. The fastest Mercedes-Benz SLS AMG GT3 was driven by Thomas Jäger (Munich), Jan Seyffarth (Querfurt-Leimbach/ Germany), Kenneth Heyer (Wegberg/ Germany) and Alexander Roloff (Berlin) of the Team ROWE RACING into seventh position. The brothers Dennis and Marc Busch (both from Bensheim/ Germany) finished eighth in the Audi R8 LMS Ultra. Former ski-jump star Sven Hannawald (Munich) finished his debut at the Nordschleife together with Lance-David Arnold (Duisburg/ Germany) in ninth place with another ROWE-SLS. The top ten were completed by Michael Illbruck (Munich) and Robert Renauer (Jedenhofen/ Germany) in the GT3-Porsche entered by Pinta Team Manthey.

The first race participation of a Porsche of the 991 model range at the Nürburgring turned out to become a triumph for Helmut Weber (Königsfeld/ Germany), Ivan Jacoma (Switzerland) and Christian Schmitz (Herresbach/ Germany) of the Team Pro Sport Performance. The driver trio right away achieved first place in the class of VLN production cars up to 3500 cc cylinder capacity (V6). “The basis of the 991 worked very well right from the beginning”, said Weber, “And I am sure there is much more potential in the car which we will be able to use.” Into second place finished another Porsche 991 with drivers Dieter Weidenbrück (Wesseling/ Germany) und Markus Schmickler (Bad-Neuenahr Ahrweiler/ Germany).

The first winners of the new Opel Astra OPC Cup are Ulli Packeisen (Wuppertal/ Germany), Hubert Nacken (Steißlingen/ Germany) und Ralf Goral (Moers/ Germany). The driver trio of the team Leutheuser Racing&Events left the multiple VLN champions Mario Merten (Kelberg/ Germany) and Wolf Silvester (Nürnberg/ Germany) behind in second place after an exciting battle in the final part of the race. The podium was completed by the two Cup experts Jannik Olivo and Elmar Jurek from Berlin. Another new cup, the TMG GT 86 Cup, was dominated by Christoph Wüest, Toni Büeler and Roger Vögel, all from Switzerland.

The second VLN round, the 5th ADAC ACAS H&R-Cup, will take place on 27 April.