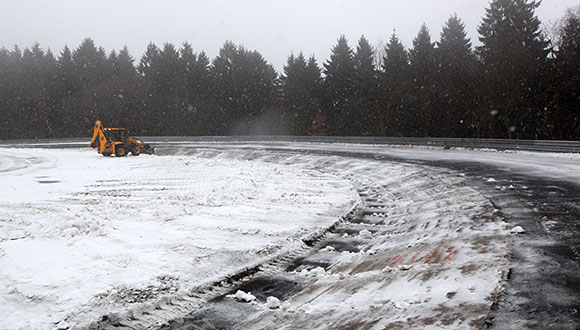 The first round of the VLN endurance racing championship Nürburgring is cancelled. Due to the prevailing weather conditions in the Eifel region, the VLN organisers’ association of the endurance racing championship Nürburgring had no choice other than to cancel the 60th ADAC Westfalenfahrt at this early stage. During an on-site visit, Clerk of the Course Peter Bröcher (Olpe/ Germany) had personally inspected the race track conditions on Wednesday morning and realized very quickly that it will not be possible to organise the race this Saturday, 23rd March.

“There is still some snow in many track sections, in particular in the run-off areas at the Nordschleife”, says Bröcher. “According to the weather forecast for the region, we cannot assume that the circuit will be completely free of snow this Saturday and that there will be no more ground frost. For this reason, we have decided to cancel the event, in particular in favour of the participants in avoiding them to come in vain to the Nürburgring.”

The VLN will nevertheless try to run the 2013 season with ten races on the calendar. “We are in close contact with the circuit management and are trying to find a reserve date”, says VLN Managing Director Dietmar Busch. “As soon as we have come to a solution which is satisfactory for everybody involved, we will immediately send out a communication.”

The VLN test and set-up session which was scheduled for 16th of March already had to be cancelled due to the weather. The last time when VLN had to cancel the opening round was in the year 2008.