VLN is starting into the second third of the season 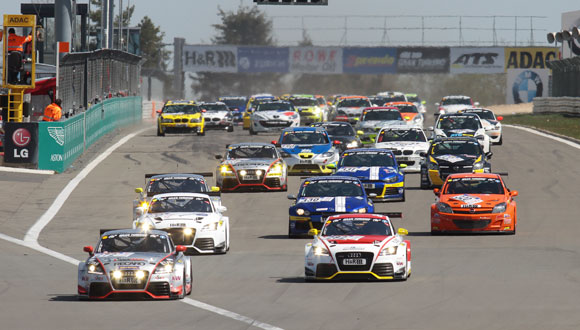 One of the highlights of the season at the Nürburgring Nordschleife has almost gone down in history – the ADAC Zurich 24h Race. Teams from the VLN endurance racing championship have again dominated at the marathon race which took place in may in the Eifel region. Cups were awarded in 20 different car classes and it was the drivers which normally have their home in the most popular VLN club racing series in Europe who were on top of the podium eleven times. Amongst them were also the overall winners of the team Phoenix Racing. Marc Basseng, Frank Stippler, Markus Winkelhock and Christopher Haase finally achieved the long awaited first triumph of an Audi R8 LMS at the 24 Hour Race in the ‘Green Hell’.

The adventure Nordschleife 2012 is however by far not over. On 23rd June, the endurance racing championship will start into the second third of the 2012 season. Seven races are still on the calendar, including the 43rd Adenauer ADAC Rundstrecken-Trophy. After three events so far, due to their strong numbers of competitors, some classes turn out to have the potential of providing the champion at the end of the season. The average number of cars in classes Cup3 (Renault Clio Cup cars) and SP3T (VLN Special up to 2000 cc cubic capacity and turbocharger) was 18 so far, whereas class V6 (VLN series production cars up to 3500 cc cylinder capacity) with an average of 17 cars was hardly any weaker. Experience has shown that the number of competitors in GT3 class SP9 will clearly go down after the 24 Hour Race. Whilst quite a number of guest drivers had joined the VLN races before the classical long distance race, the regular teams are now back again amongst themselves. And even if the number will level off at 15 – due to the high level of performance and many different winners, it is to be supposed that the future champion will not emerge from class SP9. These circumstances will however not mean that the spectators may get bored as there are still well over two dozens of top teams which are able to win the championship.

The fourth round of the VLN endurance racing championship Nürburgring will start on Saturday, 23rd June, at 12 o’clock and run over the distance of four hours. The timed practice between 08:30 and 10:00hrs on the same morning will decide on the positions on the starting grid.