Things are really taking off again at the “Green Hell” 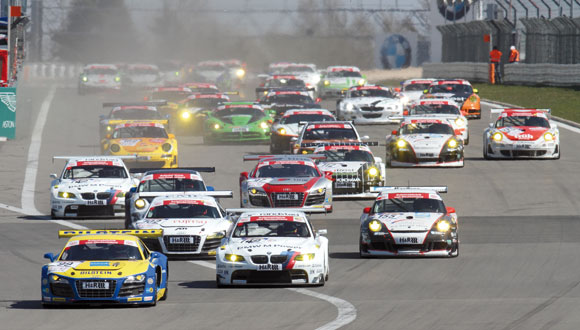 The highlight of the season for many fans of the Nordschleife, the Nürburgring 24h Race, has become history. Racing will nevertheless go on at the world’s most beautiful race track. Part two of three in European’s most popular endurance racing series will begin with the 41st Adenauer ADAC Rundstrecken-Trophy. The organising MSC Adenau e.V. im ADAC has received more than 180 entries – So exciting motor sport is to be expected again at this fourth championship round. The start to the race over four hours on the 24.369 kilometres long combination of the Nürburgring short connection and the Nordschleife will be given at 12 o’clock exactly. The positions on the grid will be determined in the morning during the timed practice between 8:30 and 10:00. A 30 minutes summary of the race will be broadcasted on 20th June at 08:45 a.m. in Sport1.

A great number of drivers has finished the 24h Race at the Nürburgring very successfully and will now return to the endurance racing series. The VLN family will hereby very much miss one of its top stars. During a collision at the start of a sports car race in Italy, Marcel Tiemann (Monaco) suffered some bad injuries. The driver of the Manthey team was subsequently placed in an artificial coma. “Marcel’s condition has stabilized but he has not passed the critical point yet”, informs team manager Olaf Manthey. “It is not foreseeable yet when he will be able to race again.” The Manthey spearhead with start number 114 will be driven by Arno Klasen (Karlshausen / Germany) and Oliver Kainz (Kottenheim / Germany). The ambitious hobby race driver Kainz in the Porsche 911 GT3 R has good chances to end up on the podium. His only two victories scored so far date back to the season 2003 when he was competing in a team with Johannes Scheid (Kottenborn / Germany) in the ‘Eifelblitz’ BMW race car.

A number of other Porsche teams will however also be serious contenders for a top place on the podium. Amongst them is without doubt the strong team made up of Lance David Arnold (Duisburg / Germany) and Christian Menzel (Kelberg / Germany) in the Haribo-Team-Manthey. Chris Mamerow (Castrop-Rauxel / Germany), who manages the team with the same name together with his father, has also good chances to win. For Klaus Abbelen and Sabine Schmitz (Barweiler / Germany) this will be their first competition in class GT3. The team’s brand-new Porsche 911 GT3 R will replace the Porsche well advanced in years. From the technical point of view, the crew will from now on be able to compete on the same level as the other top teams. The Audi R8 of Pheonix-Racing will be driven by Frank Stippler (Bad Münstereifel / Germany) and Hans-Joachim Stuck (Ellmau / Germany) at the 41st Adenauer ADA Rundstrecken-Trophy. With the sports car from Ingolstadt, the local heroes from Meuspath have succeeded to finish on the podium at the 24h Race. Another Audi R9 LMS will be driven by last year’s champion team of Black Falcon from Kelberg / Germany. For the BMW Z4 GT3 competing in class GT3 it is only a question of time until the first success can be scored. Dörr Motorsport has entered the sports coupé for the three Nordschleife-experienced drivers Rudi Adams (Ahütte / Germany), Stefan Aust (Castrop-Rauxel / Germany) and Peter Posavac (Essen / Germany).

Even though there are still seven rounds to go in the VLN Langstreckenmeisterschaft Nürburgring, the situation in the drivers’ championship is worth taking a look at. At the first three rounds, Mario Merten (Nürburg / Germany) and Wolf Silvester (Nürnberg / Germany) driving the Bonk-BMW had scored a lot of points with one class win and two second places in the extraordinary strong class of VLN Specials up to 2.000 cc cubic capacity. Despite three victories in the class of VLN Series Production Cars up to 3.000 cc cubic capacity, Matthias Unger (Heusenstamm / Germany) and Daniel Zils (Bendorf / Germany) are currently shown 0.15 points behind in the championship standing. Into third position follow Elmar Deegener (Stelzenberg / Germany), Jürgen Wohlfahrt (Murrhardt / Germany) and Christoph Breuer (Nettersheim / Germany) who have achieved two victories and one second place in the Audi TTs and in class VLN Special with turbo and up to 2.000 cc cylinder capacity.