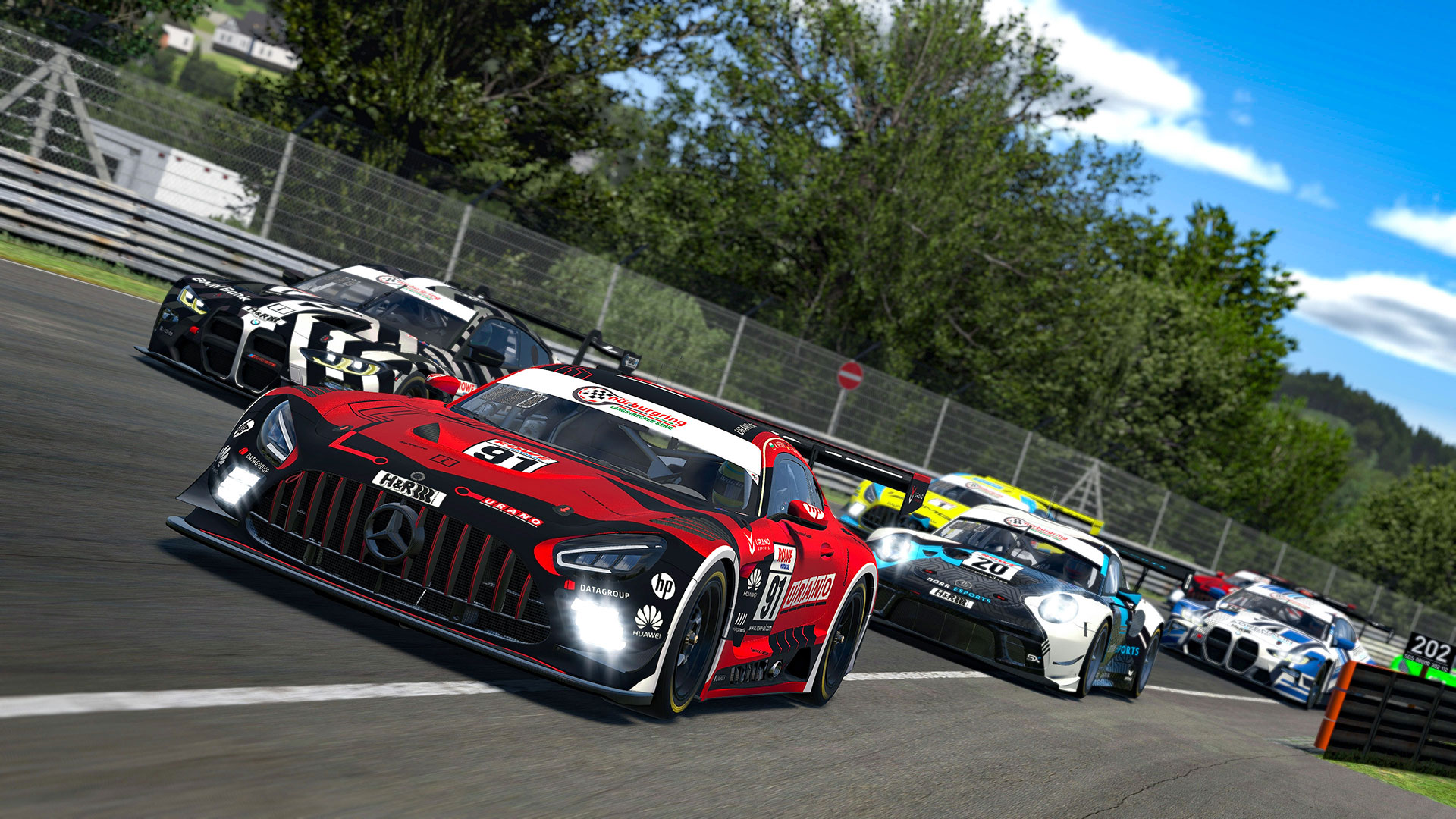 What a thriller: the battle for the podium positions at the Schütz Messtechnik 3h Race was only decided in the final laps and, after 180 minutes of racing, AMG Team URANO eSports came out on top for the first time. Alexey Nesov and Sebastian Schmalenbach won the third race of the 22/23 Digital Nürburgring Endurance Series presented by Goodyear in the Mercedes-AMG GT3, with Philipp Gogollok and Daniel Lafuente of the Mercedes-AMG Team Williams Esports following behind them in second place. The top three were completed by current NLS champion Sindre Setsaas and Fabian Hari who celebrated the first podium finish for Adrenalin Motorsport.

The fastest in qualifying was once again Sami-Matti Trogen. With a time of 7:48.329 minutes, the Finn secured pole position in the BMW M4 GT3 from Walkenhorst Motorsport. Starting the race from second position in the URANO-AMG was Nesov. Due to a pit stop that was too short, Walkenhorst ultimately only finished eighth in the end. As a result of different strategies, it was unclear for a long time who would eventually decide the race in his favour. Then, three laps before the end, a preliminary decision was made when the leading Hari in the Adrenalin BMW came to the pits for a short splash & dash. Schmalenbach took over first place and crossed the finish line as the winner. 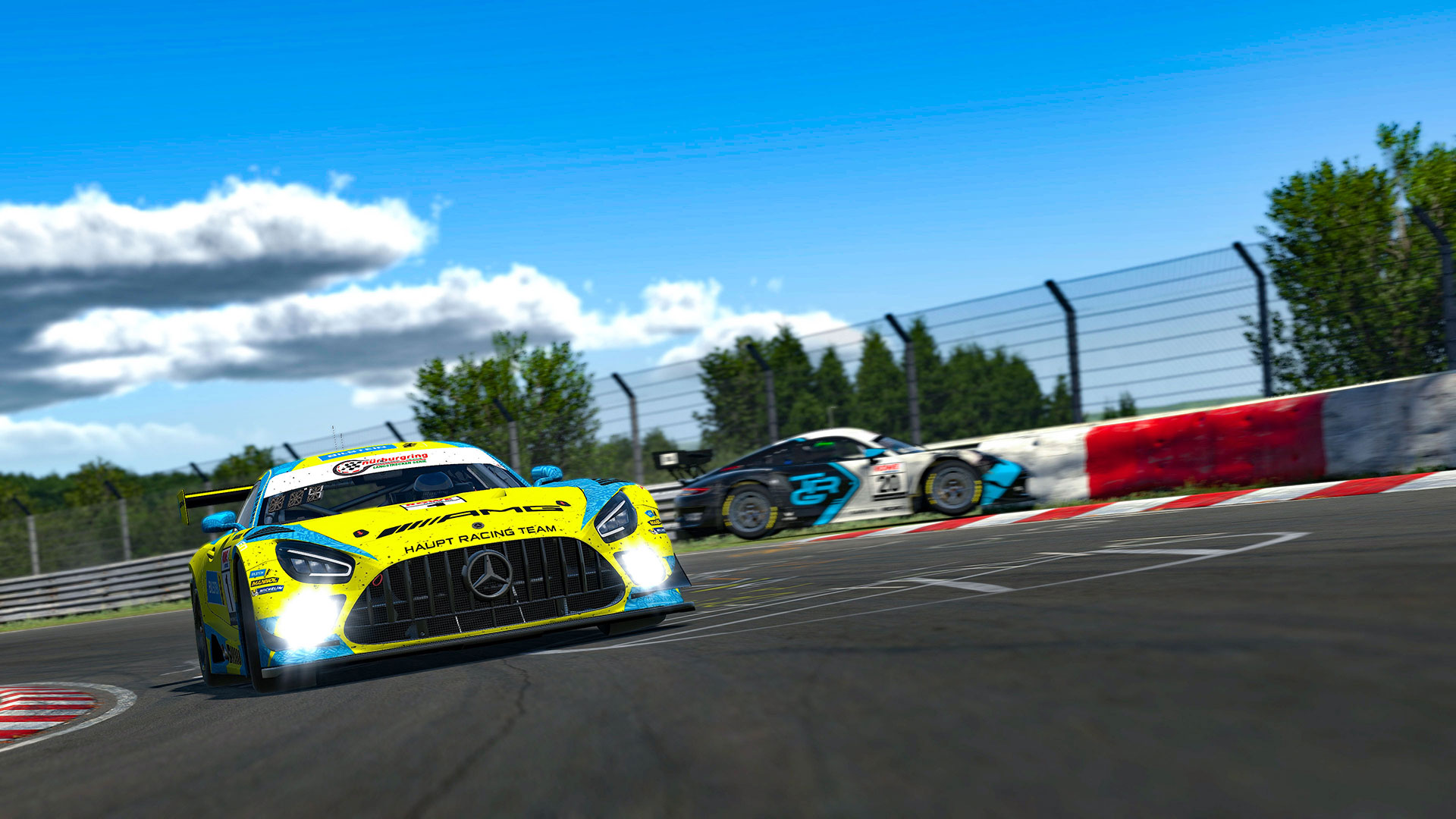 Behind him, the battle for the remaining podium positions were in full swing. In the fight for second place, Yohann Harth in the Mercedes-AMG GT3 of AMG Team HRT by UoL and Lucas Müller in the Porsche 911 GT3 R of Dörr Esports collided in the Hohenrain chicane on the penultimate lap. Müller spun and dropped back to seventh while Harth received a 30-second penalty from race control which dropped him back to fourth. Bruno Spengler and Norbi Kiss in the BMW M4 GT3 of Team BMW Bank finished fifth ahead of the winners of race two, Vasilios Beletsiotis and Will Tregurtha in the Mercedes-AMG GT3 of Williams Esports Razer.

“I didn’t notice much of the chaos behind us,” said final driver and URANO team principal Schmalenbach. “My stint was very good, although I was a bit nervous. You have to be realistic about that – as a daddy driver I spend much less time racing than many of my competitors. In the end, the win was only possible because of Alexey’s perfect groundwork.” 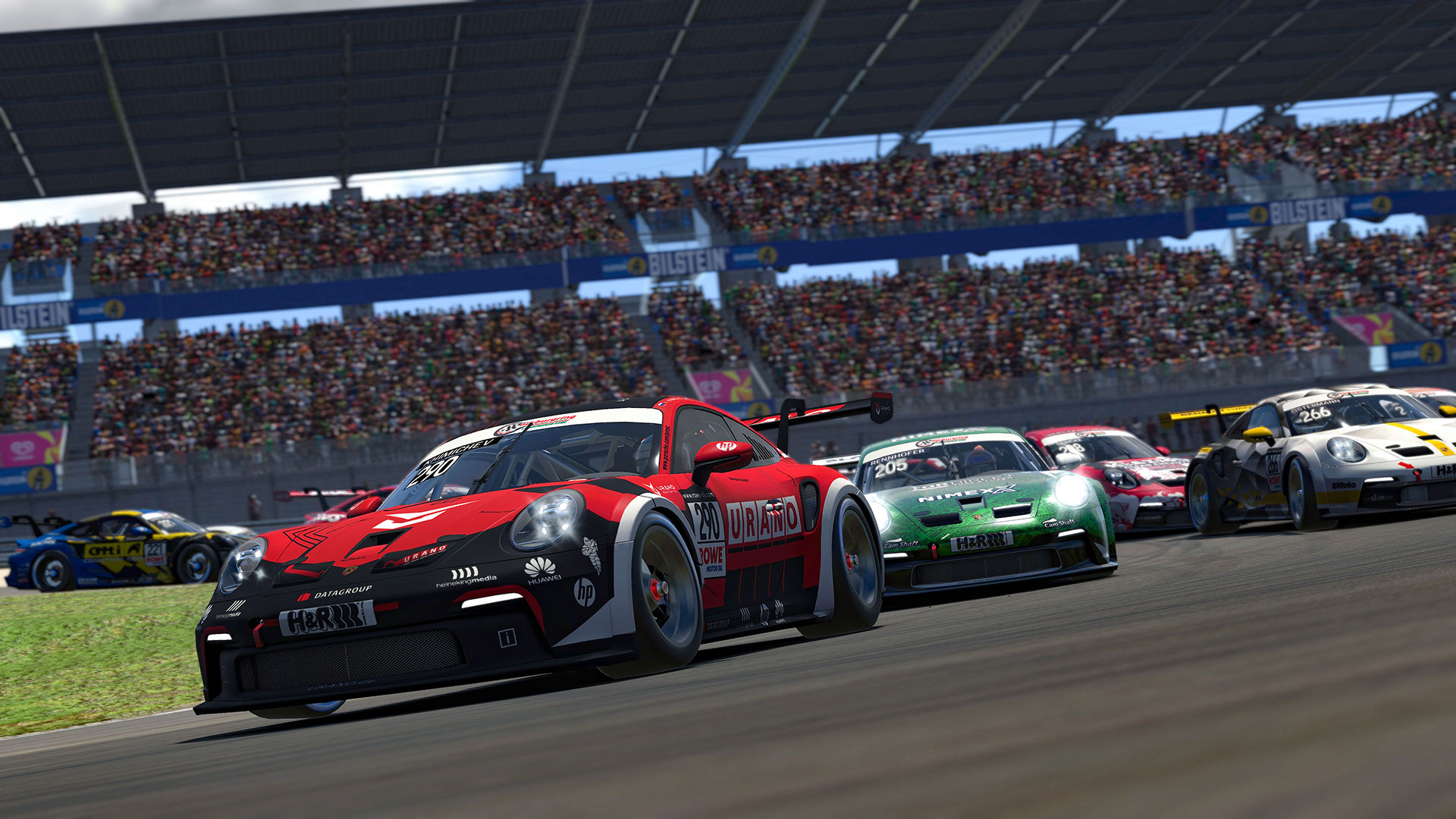 The fact that URANO was finally able to cheer twice was due to the first victory achieved by Vlad Khimichev and Sam Kuitert in Cup 2. The duo prevailed over Stefan Wernstedt and David Wassermann from AVIA W&S e-Motorsport and the two guest starters René Osterkamp and Steffen Herrmann driving for Team75 Bernhard by SimRC. “We knew exactly which teams around us had received penalties due to top results at the last race. And our strategy was perfect and exactly based on that,” said Khimichev. “Sam had a very good first stint, so all I really had to do was to bring the car to the finish. Thanks to the whole team for the perfect preparation.” 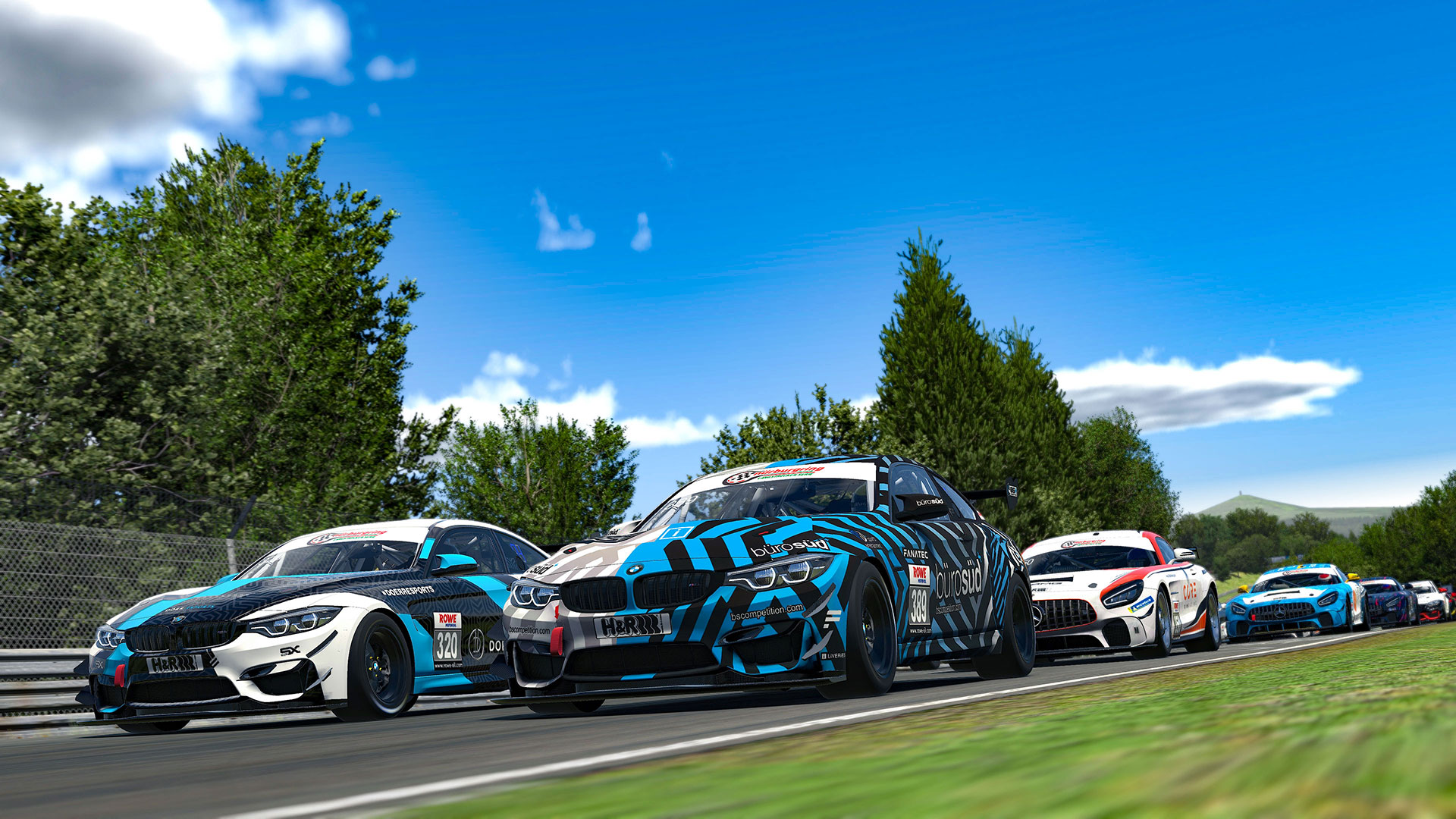 BS+COMPETITION is the first team to achieve a second class win in the current season. Felix Quirmbach and Joshua W. Anderson in the BMW M4 GT4 dominated the competition in the SP10 class. At the finish, their superior lead was 28.822 seconds over Pascal Stix and Sven Neumann in the Mercedes-AMG GT4 of CoRe SimRacing. Third place went to Tatu Siipola and Aleksi Elomaa in the BMW M4 GT4 of WALKENHORST X-R’CER. “Our plan to save a third pit stop with a fuel-saving driving strategy worked out,” said Anderson. “This is possible even on the Nordschleife, although not as easy as on some other circuits. We have been practising a lot and we want to get better every race. Maybe we are not the fastest drivers in terms of a single lap but today we were definitely the best team.” 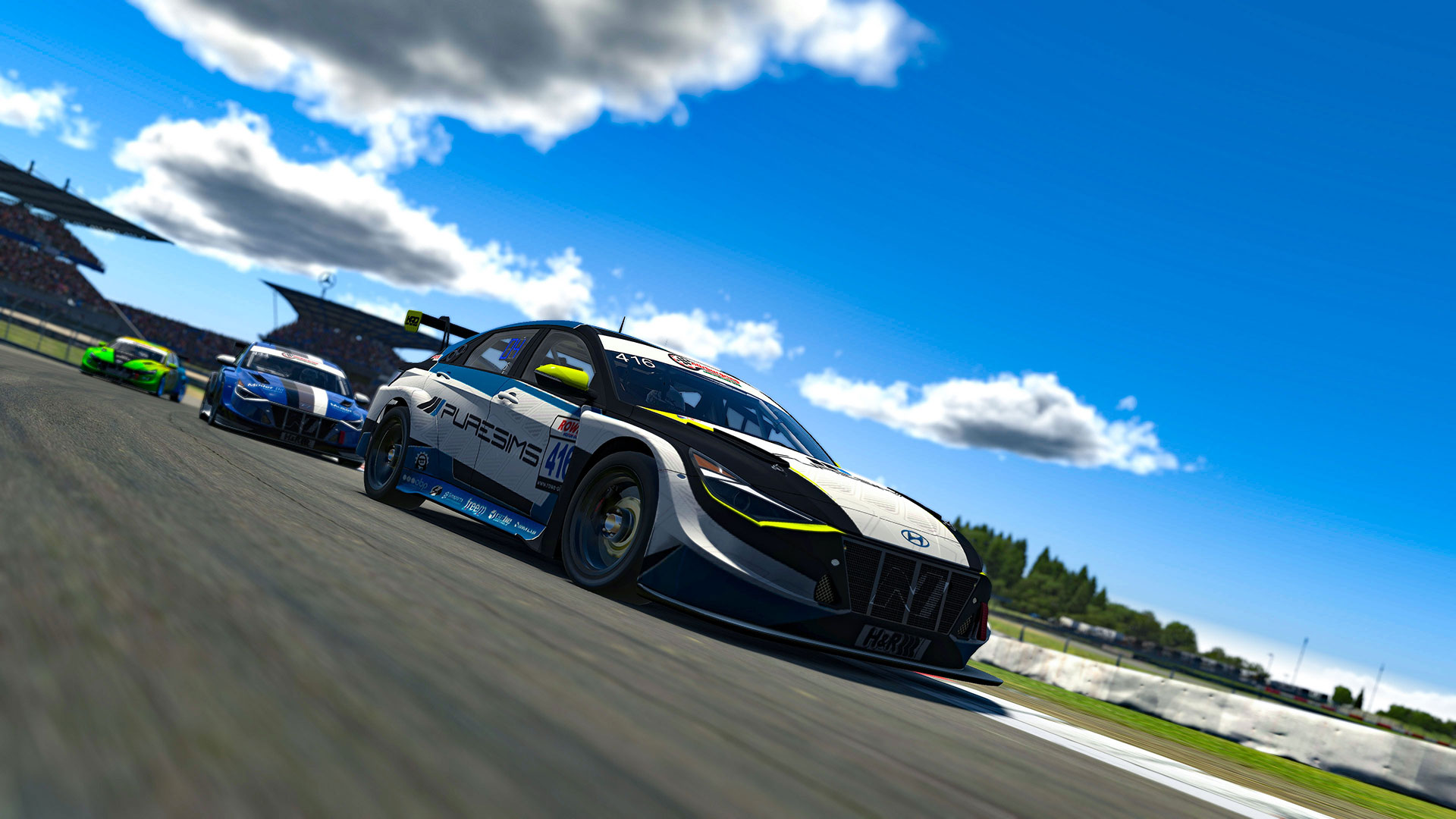 Konstantin Stolzenburg and Ross Macfarlane celebrated their first DNLS victory in the SP3T class. At the finish line, Puresims Esports’ lead over the winners of the season opener, Corentin Guinez and Kieran Harrison from Sim RC, was 33.540 seconds. Impulse Racing by GTÜ also celebrated a premiere. Martijn Asschert and Jan Böhl claimed a position on the podium for their first time. “It went much better today than in the last two races,” said Macfarlane. ” I must admit that our competitors had a bit of bad luck today, but we, too, we’ve had that before. Our goal was to stay out of everything in the early stages and especially not lose too much time when lapping. This plan worked out today.”

The fourth race of the Digital Nürburgring Endurance Series will be the HAPPY RACING 3.5h Race on 11 February 2023.