Assenheimer and Metzer floating to a hat-trick 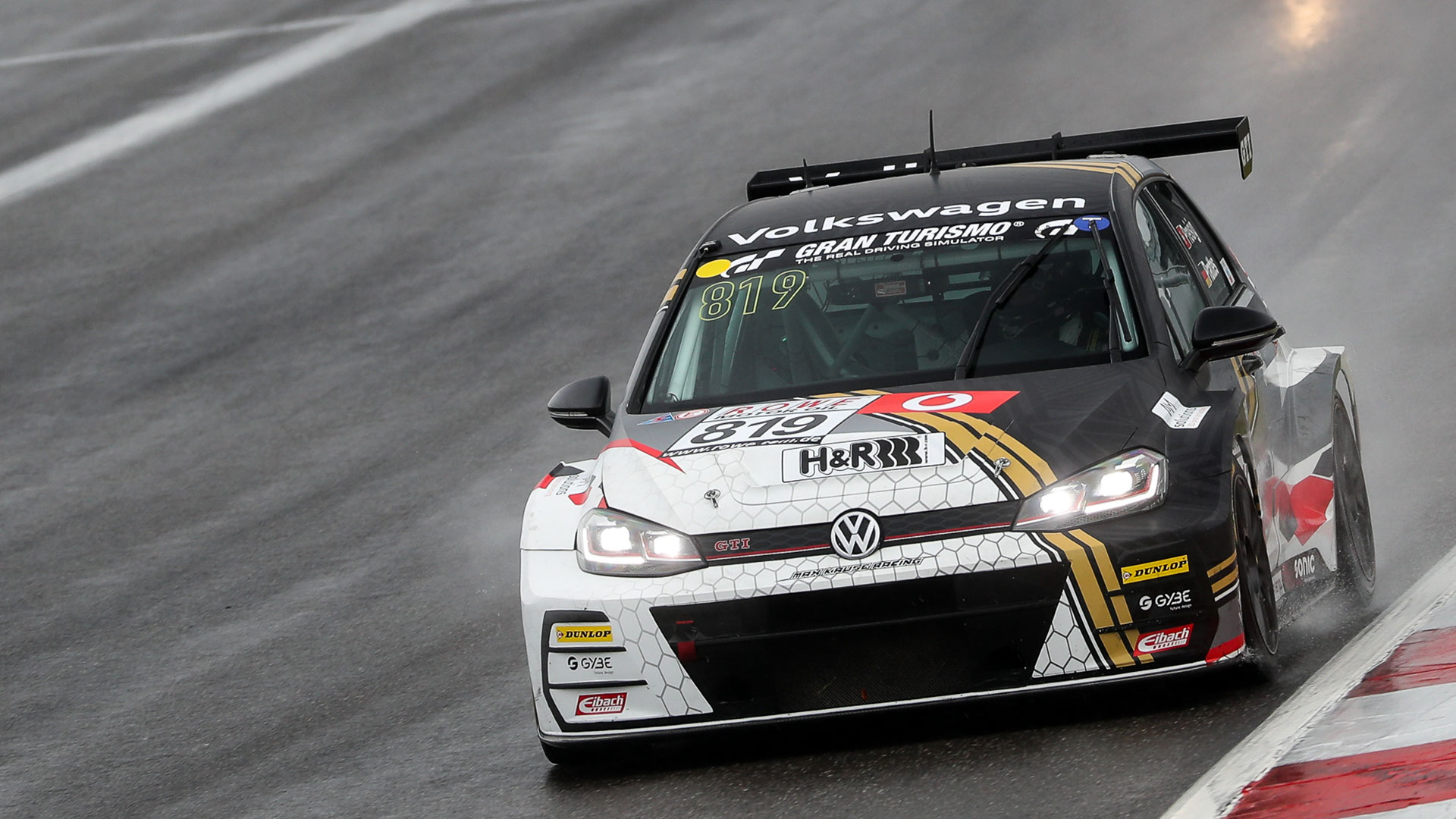 Patrick Assenheimer has secured his place in the history books of the VLN. Together with Manuel Metzger, the 27-years old collected his third victory in a row with the Mercedes-AMG GT3 of BLACK FALCON Team AutoArena Motorsport. The last ones to accomplish this feat were Christian Mamerow and Dirk Werner in winning the last three rounds of the season 2008. The top three at the 42nd RCM DMV Grenzlandrennen were completed by Pierre Kaffer and Frank Stippler in the Audi R8 LMS of Car Collection Motorsport as well as by Philip Ellis and Dominik Baumann in the Mercedes-AMG GT3 of GetSpeed Performance. Considering the weather conditions prevailing during this sixth round of the VLN season, the race turned out to become a poker game. Heavy rain falls and the track then drying off put high demands not only on the drivers, but also on the strategy experts of the teams who were asked to find the perfect timing for the tyre choices and changes. 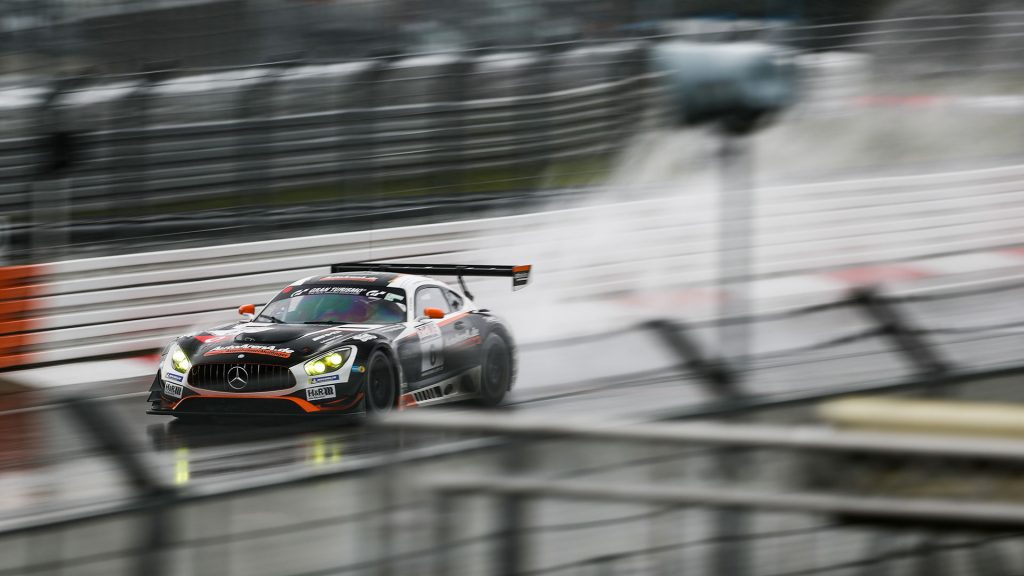 “When I competed my first races in VLN class V4 in 2011, ROWE-Racing changed to Mercedes-AMG. I was absolutely fascinated by the SLS at that time and it had become my big dream to race around the Nordschleife in such a powerful GT3 race car some time”, said Assenheimer. “But this dream appeared to be unattainable and not to come true. Today, I am celebrating my fourth VLN victory, the third in a row, and I am just incredibly happy. That is absolutely amazing.” The sixth race of the season was a big challenge not only for Assenheimer. “I think it was not easy for any of the drivers to get through today’s race safely and without any problems”, he said. “Black Falcon opted for a perfect strategy today. We anticipated that the track would dry off quite quickly in the opening laps. So we adjusted the air pressure accordingly. At the beginning, I was still at a disadvantage, but after one and a half laps, I was in a position to fully attack. I was, however, not able to go the pace of Kevin Estre in the Manthey-Porsche.“

The pole position was gained by double starter Frank Stippler in the Audi R8 LMS of Phoenix-Racing. At the beginning of the race, the experienced driver from Bad Münstereifel/ Germany fought a thrilling duel with Estre in a Porsche 911 GT3 R of Manthey-Racing. The Frenchman went into the lead in lap 2 and moved away from the rest of the field but had to retire in lap 14 after an accident in the ‘Kesselchen’. The Phoenix-Audi, too, had to stop the race later in seventeenth lap. “Both in the Phoenix-Audi at the beginning of the race and in the Car Collection vehicle – we didn’t get the tyres quite right in all of my three stints”, admitted Stippler. “So more than second position was not possible today.” Kaffer added: “However, the result is completely ok considering the difficult conditions prevailing today. To some extend, top priority had to be given not to go off the track.”

GetSpeed driver Ellis was also happy with his second top-three result of the 2019 season: “That was a very demanding race. Not physically, but mentally. I completed both of my stints in the rain and, apart from the GP course, the track was actually never dry when I was behind the wheel. So I had to take utmost care not to destroy my tyres already at the beginning of my stints. It was difficult to push hard due to the weather, it was raining all the time, sometimes more and sometimes less. We were then able to make up some time in the final part of the race, despite some heavy aquaplaning.”

Behind the top three, the two cars entered by Falken Motorsports, the Porsche 911 GT3 R with Klaus Bachler and Martin Ragginger as well as the BMW M6 GT3 driven by Peter Dumbreck and Alexandre Imperatori, finished in to fourth and fifth places respectively. The fastest Pro-Am team was Walkenhorst Motorsport with drivers Rudi Adams, Jörn Schmidt-Staade and Jordan Tresson in a BMW M6 GT3, finishing eighth. The top GT3-Am car – also entered by CarCollection – finished in 36th place overall and was driven by Oliver Bender, Klaus Koch and Peter Schmidt. A big success was achieved by Moritz Kranz, Thorsten Jung and Nico Menzel for the team of Mühlner Motorsport. The driver trio finished in ninth position with the Trophy-Cayman GT4 CS and left a number of more powerful cars behind. Fastest TCR car was the VW Golf of Max Kruse Racing with drivers Andreas Gülden and Benjamin Leuchter.

No change in the championship lead

Torsten Kratz, Oliver Frisse and Moran Gott have been demonstrating a good performance so far during the current season. The trio of the AVIA Team Sorg Rennsport took two class wins in the first five races of the year in the strong field of class V4 and was temporarily shown in the lead of the standing. However, they have already scored one zero points result due to a retirement so that currently they do not play any role in the championship lead. This could still change towards the end of the season when all the zero points results will be taken into consideration for the championship classification. After a strong finale in this sixth round, in which Gott defeated the title defenders Rink, Brink and Liesen, the team took their third class victory in V4 which figured 27 cars this time. Kratz, Frisse and Gott, though, cannot afford any more lapse. Two more victories for Sorg Rennsport were taken by Sindre Setsaas, Inge Hansesaetre and Moritz Oberheim in the Cup 5 as well as by Heiko Eichenberg and Erik Johansson in the GT4-Klasse SP10.

The seventh round of the VLN endurance championship Nürburgring will take place on 28th September. The last third of the season will then begin with the 59th ADAC Reinoldus-Langstreckenrennen which will run over the traditional four hour distance.