One-two finish for Black Falcon at the season highlight 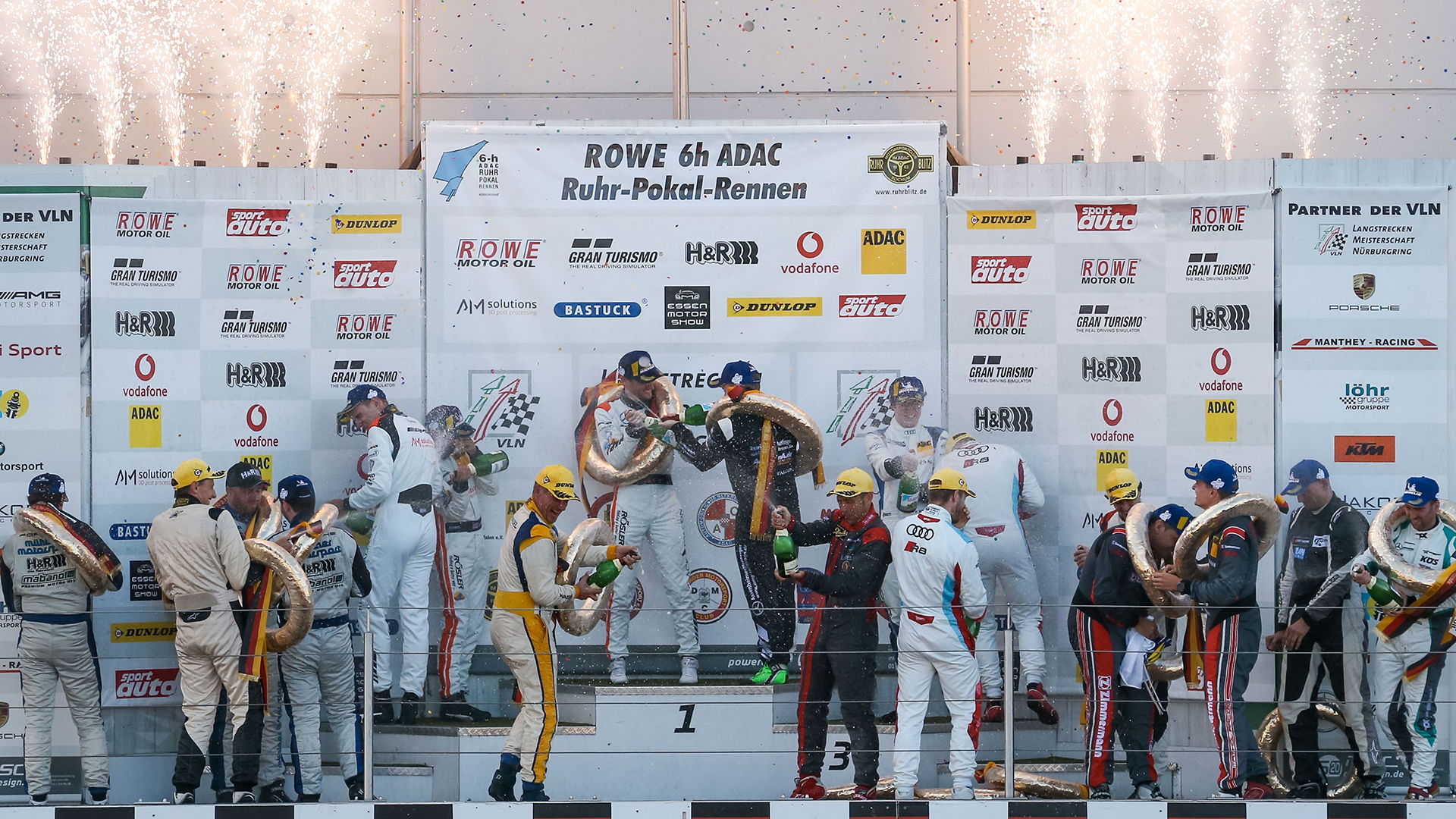 Black Falcon made its mark on the ROWE 6 Hours ADAC Ruhr-Pokal-Rennen. Patrick Assenheimer and Maro Engel first rejoiced in the pole position which they gained in the wet qualifying and then in the second win in a row taken by Assenheimer and his team in a race which finally found its end in bright sunshine. The advance of the Mercedes-AMG GT3 of the Black Falcon Team AutoArena Motorsport at the finish was 35.804 seconds ahead of their sister car driven by Hubert Haupt, Adam Christodoulou and Luca Stolz. The top three were completed by Vincent Kolb and Frank Stippler in the Audi R8 LMS of Phoenix Racing.

“Perfect”, said a delighted Assenheimer in view of his third VLN overall victory. “Maro and I knew perfectly well that the competition would be very close, specifically within our own team. That was an extraordinary thrilling race – with the better end for us.” Haupt added with a smile in his face: “For me, to be beaten by the team mate was twice as bad. We would have liked to repeat our last year’s success.”

“Typical Eifel weather, fortunately I like racing in wet conditions”, said pole setter Engel, remembering his timed practice session. The Monaco resident set the fastest time early on in the session and the times couldn’t get any better in the following due to fog and increasing rain. The first race hour, too, was still run in the rain. Engel called upon all of his long-term experience in the battle with Fabian Schiller in the GetSpeed-Mercedes-AMG and Stippler in the Phoenix-Audi. “That was a very tough race with cool duels. I am more than happy”, he said. The two Black Falcon teams were in the race lead for a total of 34 laps, with the winners dominating over 16 laps and the second-placed over 18 laps. 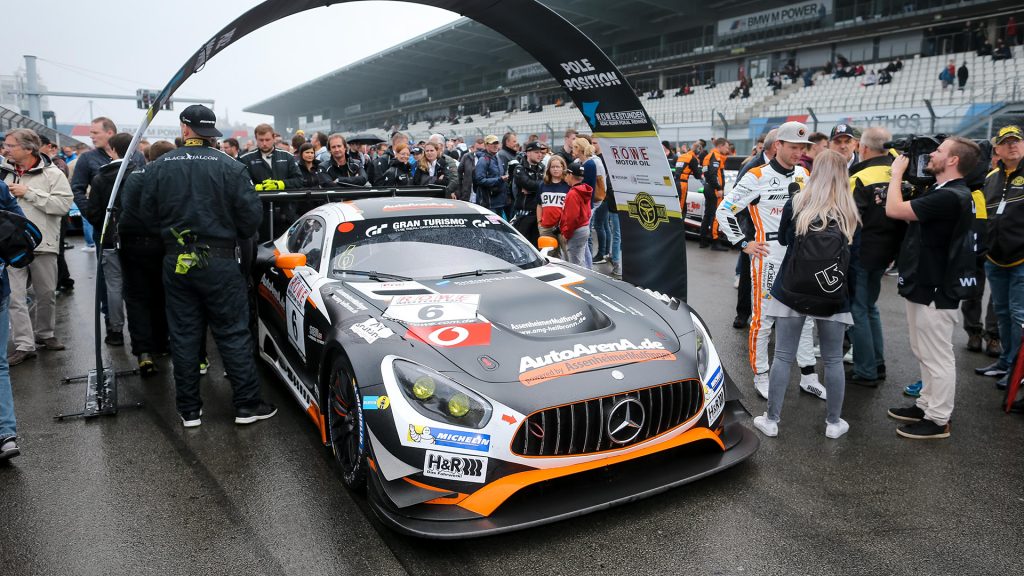 Kolb was really happy about his second top three position in the VLN. “Had anyone told me yesterday that I would be on the podium today, I would have signed that right away”, he said. “Stippi was very strong at the beginning. I had an exciting fight then with Patrik Assenheimer in my stint – we went side by side around the Nordschleife for many laps. It was great fun and the battle was finally rewarded with a top three tropy.” 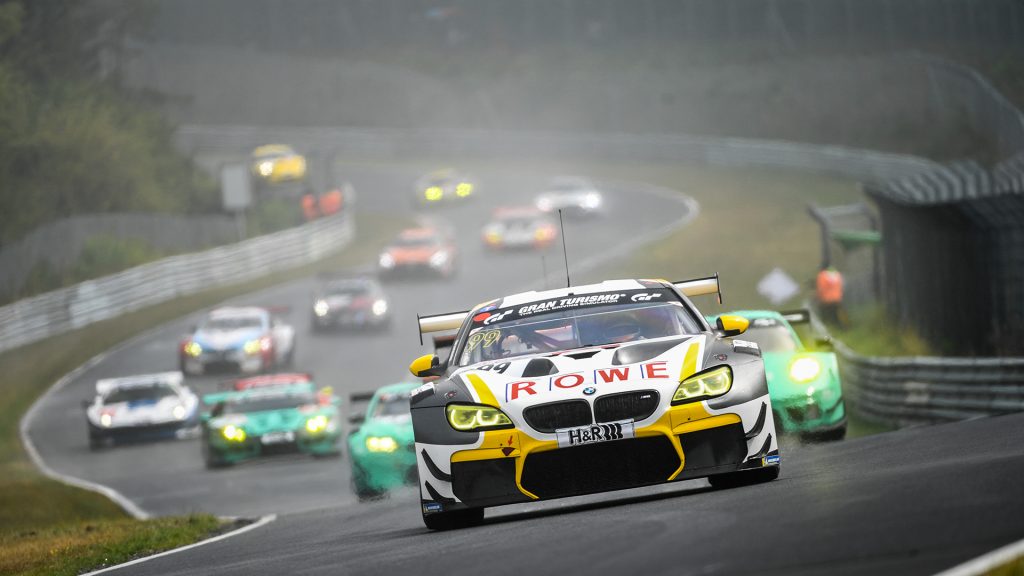 Behind the top three positions, the two BMW of ROWE RACING and Walkenhorst Motorsport finished in fourth and fifth positions. The Falken-Porsche took sixth place ahead of the blue and green BMW M6 GT3 of the team. The victory in the Pro-Am classification went to Michele Beretta, Steve Jans and Nicolay Møller Madsen in the second Phoenix-R8. After 40 laps, they were shown in eight place in the overall classification. “It was a difficult start. We completed three laps until we finally changed to slick tyres. By then, we were already so much behind that there was no more chance to make it into the top three and on the podium. So we are not one hundred percent satisfied”, said Jans.

The decision in the Cayman GT4 Trophy by Manthey-Racing was particular exciting. Ivan Jacoma, Claudius Karch and Kai Riemer in the car of Schmickler Performance powered by Ravenol celebrated their first win of the season ahead of Moritz Kranz, Thorsten Jung, Nico Menzel and Fidel Leib in the Mühlner-Porsche. The winners’ advantage at the finish was merely 15.488 seconds. Yannick Fübrich and David Griessner took the victory in the BMW M240i Racing Cup for the Pixum Team Adrenalin Motorsport, followed by Sindre Setsaas, Inge Hanseaetre and Moritz Oberheim of the Team AVIA Sorg Rennsport. Into third place finished Nico Otto, Lars Peucker and Florian Naumann of the Team Scheid-Honert Motorsport. First in the KTM-X-Bow GT4 class became Georg Griesemann, Florian Bodin and Reinhard Kofler. The winners in the GT4 class SP10 were Heiko Eichenberg and Erik Johansson in the BMW M4 GT4 of AVIA Sorg Rennsport and the TCR class was dominated by Matthias Wasel, Frederic Yerly and Roland Schmid in the Seat Cupra of mathilda racing.

After five of nine rounds in the VLN endurance championship Nürburgring, Yannick Fübrich and David Griessner are in the championship lead with 38.85 points. With a gap of 1.03 points behind follow Norbert Fischer, Oskar Sandberg and Daniel Zils, also of the Pixum Team Adrenalin Motorsport, in second place. Third in the current standings are Nico Otto and Lars Peucker. Griessner is also in the lead of the VLN Junior Trophy, whilst Fischer / Sandberg / Zils are in first place of the VLN Production Car Trophy. After two victories in a row, the Black Falcon Team AutoArena Motorsport holds first place in the ROWE Speed Trophy by VLN 2019. 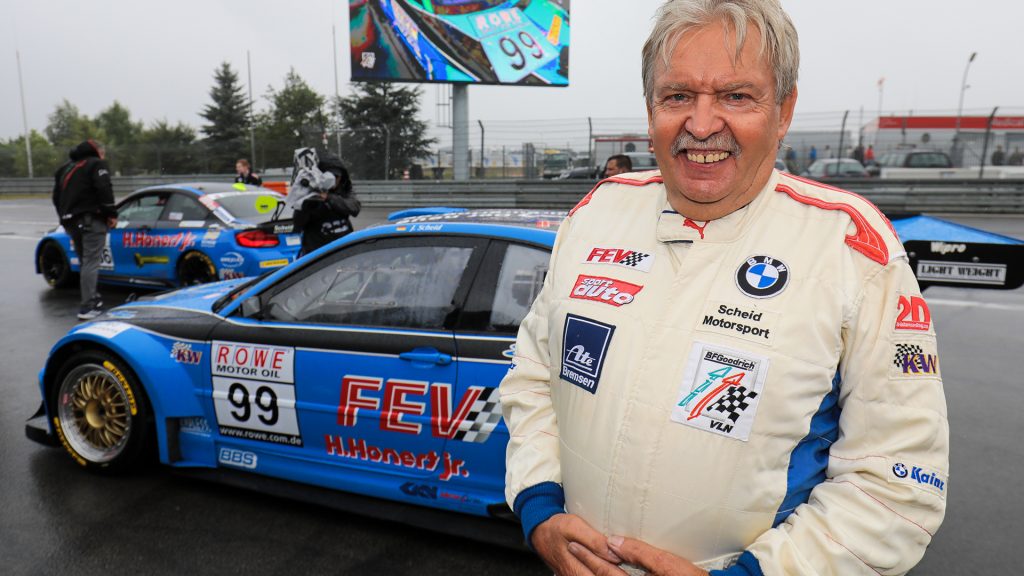 There was a particularly emotional moment immediately preceding the start of the ROWE 6 Hour ADAC Ruhr-Pokal-Rennen. On occasion of the 50thjubilee of Scheid Motorsport, Johannes Scheid, who is an institution in the VLN, completed a lap of honour in the BMW M3 GTR S of the season 2009. The engine manufacturer FEV from Aix-La-Chapelle, long-term partner of Scheid, brought the public’s favourite from that time back to the Nürburgring. “That was fantastic, I will keep wonderful memories of this for a long time”, said Scheid overwhelmed by emotions. The fans celebrated the return of the legendary ‘Eifelblitz’ which thrilled the spectators around the Nordschleife in particular with the powerful sound of the V8 engine.

The sixth round of the VLN endurance championship Nürburgring will take place on 7thof September. The 42ndRCM DMV Grenzlandrennen will run again over the traditional distance of four hours.