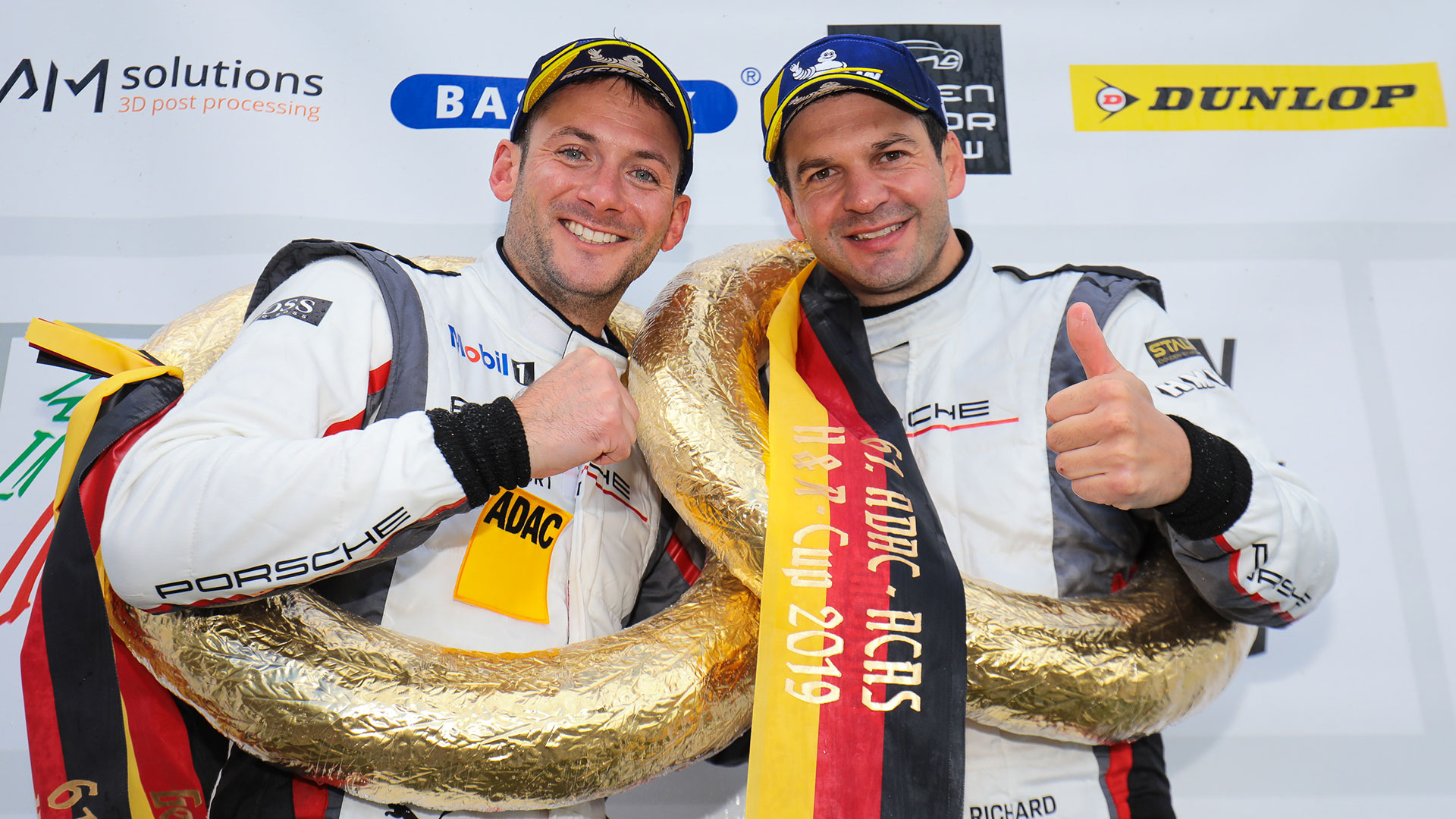 The unpredictable weather in the Eifel played an important role once more at the third round of the VLN endurance championship at the Nürburgring. Heavy rainfalls, especially during and right after the start of the 61stADAC ACAS H&R Cup provided really heavy challenges for the race drivers. Some of those hereby fell by the wayside. Others who successfully coped with the adverse weather conditions at the green hell were in the end all the more beaming with pride: The winners Richard Lietz and Nick Tandy (Porsche 911 GT3 R, Manthey-Racing), Otto Klohs and Dennis Olsen (Porsche 911 GT3 R, Manthey-Racing) into second place as well as Adam Christodoulou, Maro Engel, Manuel Metzger and Dirk Müller (Mercedes-AMG GT3, Mercedes-AMG Team Black Falcon) to complete the top three.

“A fantastic result”, said Lietz after the race with a smile in his face. “The last laps, when the track got dry, were really an adventure because my rain tyres were very much worn.” Tandy added: “The beginning of the race, too, was difficult. There was a lot of water on the track and we had partly heavy aquaplaning. I went sidewise a few times and was quite lucky here and there. Apart from that, our Porsche was perfect today.” Klohs, too, was happy with his first participation in the VLN 2019: “Dennis turned out to be a true specialist in the rain. So at some point, we took the decision to let him out on the track as long as possible. In the rain, it is particularly important to have a good knowledge of the conditions on the circuit.” The Norwegian confirmed: “I felt very comfortable in the car.”

Disasters, difficulties and setbacks – that was the summary of the third Porsche of Manthey Racing. Estre gained pole position in the timed practice. At the start then, the Frenchman accelerated too early which resulted in a stop-and-go penalty imposed by Race Control. The car with start number 911 was fighting its way back into the top group before Christensen, at the end of his stint, stopped in the pit lane entry due a lack of fuel. Even though the team managed to bring the race car to its garage, it made then a fatal mistake during refuelling. An amount of 109.37 litres of fuel were filled in. The fuel tank of the Porsche has a capacity of 110 litres but, for this model, the maximum permitted amount of fuel to be refilled is only 107 litres. For each litre in excess, a time penalty of five seconds is imposed. Estre thus crossed the finish line in second place but dropped back into fourth position due to the addition of 15 seconds. Manthey Racing thus missed a historic one-two-three win.

One man’s sorrow is another man’s joy – Black Falcon inherited third place and the first race participation in 2019 of Manuel Metzger, who was not able to start in the two first races due to a sports injury suffered in January, was crowned with success. Sheldon van der Linde and his team mate Nick Yellow in the BMW M6 GT3 of the BMW Team Schnitzer finished fifth. Marco Wittmann, Jesse Krohn and John Edwards took sixth place in the counterpart of ROWE Racing. The winners in the Pro-Am classification of the GT3 class were John Shoffner, Janine Hill and Fabian Schiller in the Mercedes-AMG GT3. 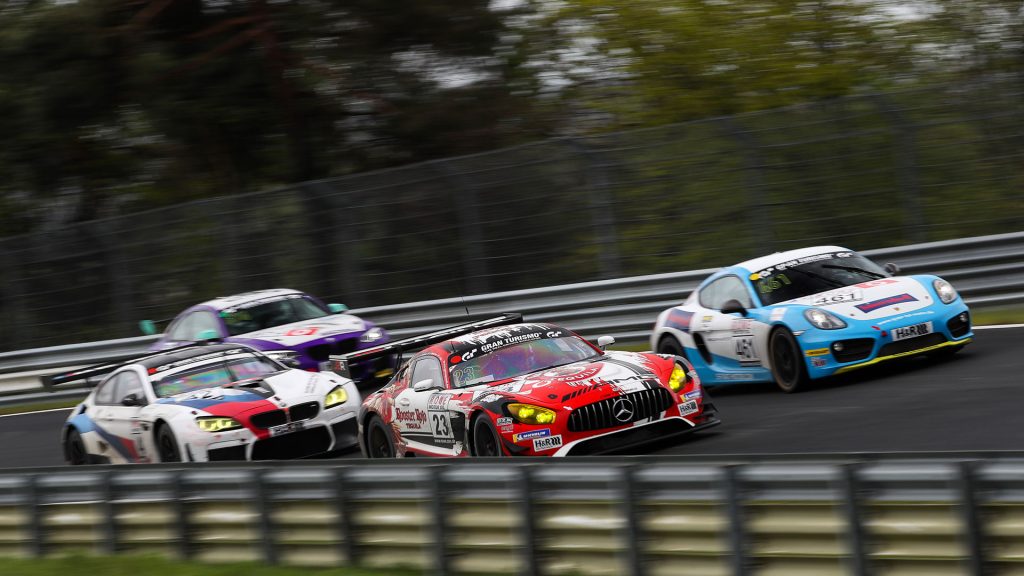 An exciting showdown could be observed in class V4 which figured the highest number of cars with 24 participants. Just before the race end, Torsten Kratz, Oliver Frisse and Moran Gott in a BMW 325i of the Team AVIA Sorg Rennsport left the current champions Philipp Leisen, Danny Brink and Christopher Rink of the Pixum Team Adrenalin Motorsport behind. Their advance at the finish was not more than 5.316 seconds. After their victory at the opening round, the Sorg trio celebrated already their second win.

As representatives of the Pixum Team Adrenalin Motorsport, Yannick Fübrich and David Griessner took the top position on the winners’ podium after dominating the BMW M240i Racing Cup class. The Cayman GT4 Trophy by Manthey-Racing was won – also for the second time in a row – by Mühlner Motorsport with drivers Moritz Kranz and Nico Menzel. After three of nine races, the three winning teams are also found in the lead of the standings. Frisse / Gott / Kratz are in first championship place ahead of Fübrich / Griessner and Menzel. In the two races so far in which championship points were allocated, Kranz had started in two cars respectively. Before each start, double starters must decide in which of the cars they wish to score points for the VLN classifications. At the season opener, Kranz made his decision in favour of the Cup-Porsche of Mühlner and holds thus the same position in the championship as Menzel.

After two classified races, the Porsche 911 GT3 R of Manthey-Racing with start number 912 is leading in the ROWE Speed-Trophy. Into second place follows the BMW M6 GT3 (#99) of ROWE-Racing. The top three are completed by the nine-eleven #4 of Falken Motorsports.

The fourth round of the VLN endurance championship Nürburgring will not take place before the 13thJuly when the MSC Adenau will also celebrate the 50thanniversary of the Adenauer ADAC Rundstrecken Trophy. Before that, a number of VLN teams will start at the Nürburgring 24h (20 to 23 June) and the linked Qualifikationsrennen on 18than 19thMay.