ROWE wins the season opener ahead of Manthey after a thrilling showdownadmin23. March 201924. March 2019 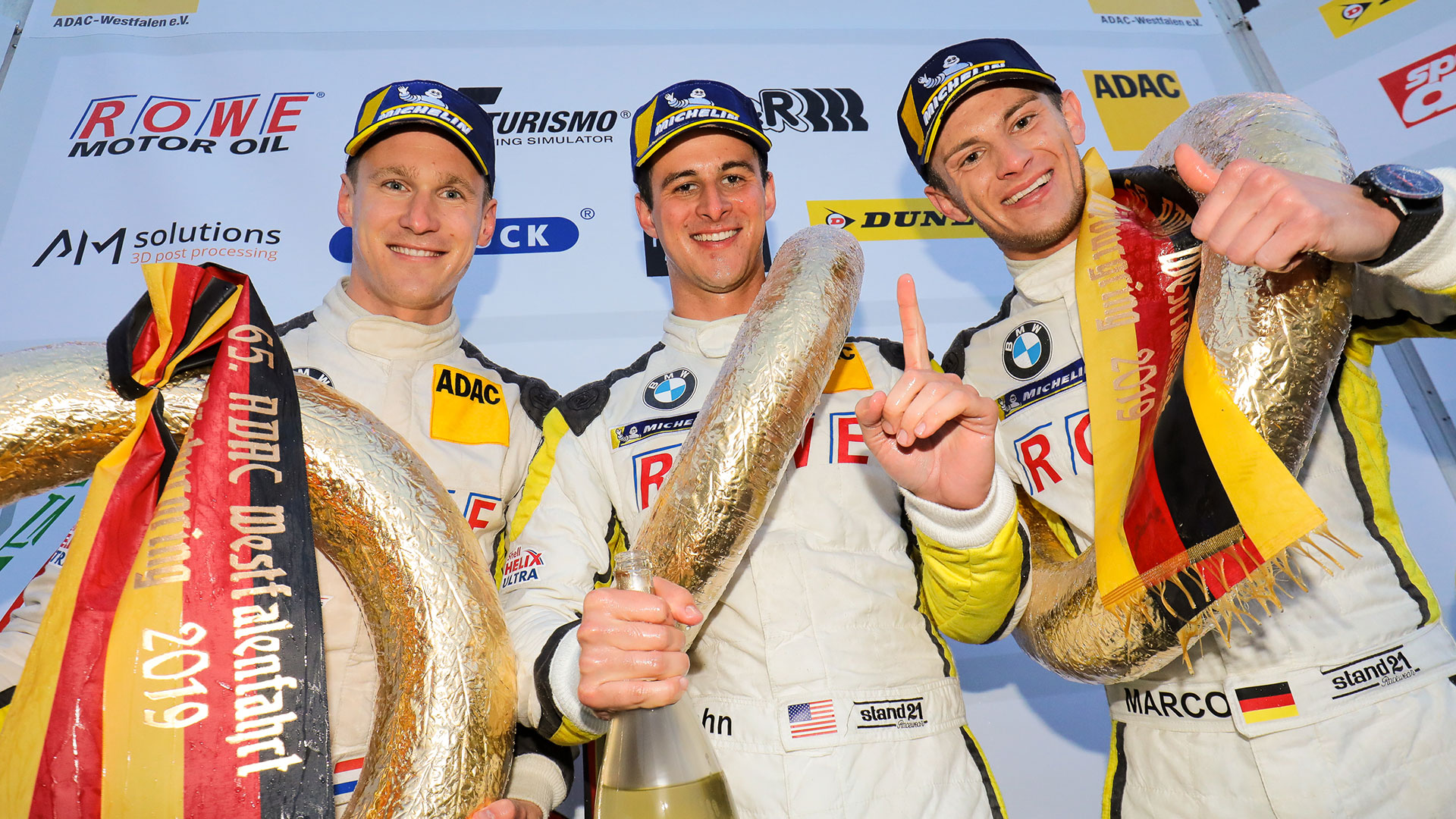 Much of a thriller until the very last second – the VLN season opener 2019 was decided on the very last metres only. Nick Catsburg, Marco Wittmann and John Edwards in the BMW M6 GT3 of ROWERacing finally are the winners of the 65thADAC Westfalenfahrt. Their gap ahead of Fred Makowiecki and Patrick Pilet in the Porsche 911 GT3 R of Manthey-Racing who finished second was 5.486 seconds at the finish. The top three were completed by Connor De Phillippi, Tom Blomqvist and Mikkel Jensen in the ROWE sister car which marked a perfect start of the season for the team which is based in St. Ingbert, Saarland. 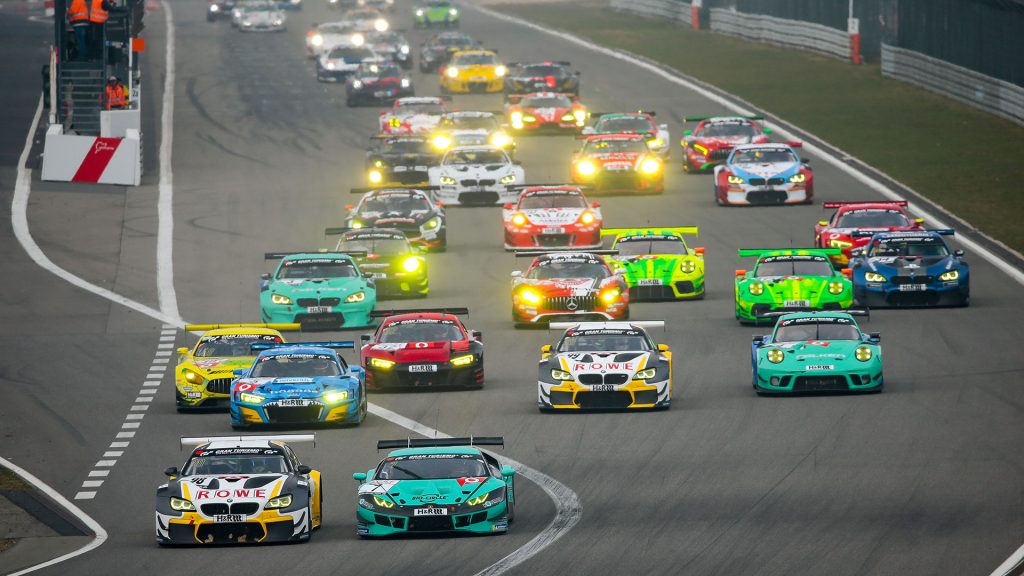 The fans of the VLN had to wait for a long time until the sound of the engines could finally be heard again around the legendary Nürburgring Nordschleife. Due to heavy fog, the start of this first VLN race was delayed. The green flag for the timed practice, which was shortened onto 60 minutes, was shown at 12:30hrs only. ROWE Racing also secured the first pole position of the season. Connor De Phillippi in the BMW M6 GT3 set the fastest time with 8:01.192 minutes. The top ten cars were within only 2.550 seconds of each other. The race was started at 15:28hrs and also ran over a shortened distance of 2:34 hours.

The race lead changed seven times. Apart from the top three cars in the final classification, the Lamborghini GT3 of Konrad Motorsport was also able to enjoy some kilometres of leading a race. The last lap then provided a thrilling showdown. Pilet started the last lap in the race lead but was left behind in the end. At the end of a code-60-phase, Edwards reacted more swiftly and snatched the lead. Race Control carried out an investigation right after the finish by checking the onboard camera of the Porsche, but finally confirmed the result. “Maybe the Porsche drivers was sleeping a little”, said a grinning Wittmann. Pilet was nevertheless quite relaxed regarding his defeat: “Such is life sometimes.”

Apart from the direct fight in the last lap, it was also the strategy which decided about victory and defeat within the two ROWE teams. “We stayed out one lap longer in the first stint, and then also in the second one. So we had a very short last stop”, explained Wittmann. “We should have won”, said Blomqvist. “We had the pole, a perfect start, a fantastic first stint but finally unfortunately the slightly weaker strategy. However, it is an amazing success for the team.” 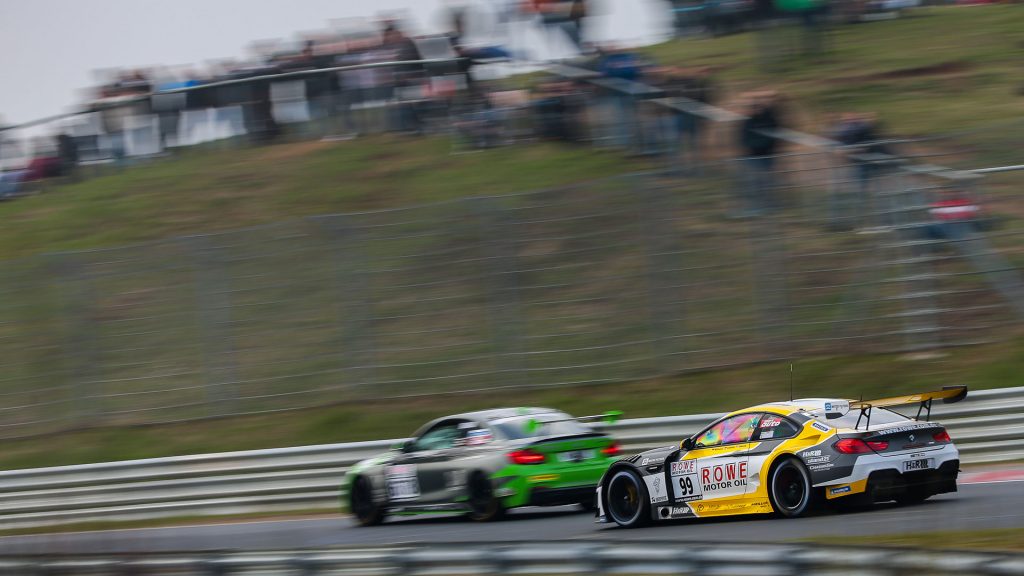 Klaus Bachler and Jörg Bergmeister in the Porsche 911 GT3 R of Falken Motorsports into position four missed the podium by only 0.281 seconds. With Frikadelli-Racing, another Porsche finished in fifth place. The fastest Audi R8 LMS was driven by Vincent Kolb and Frank Stippler who finished sixth, followed by Mann-Filter Team HTP Motorsport with drivers Maximilian Götz, Christian Hohenadel and Raffaele Marciello in seventh place and fastest of the Mercedes-AMG-Team. The highest-ranked Pro-Am-Team in the GT3 class was Walkenhorst Motorsport with drivers Rudi Adams, Immanuel Vinke and Jody Fannin. “A good start into the new season”, was the summary of Adams.

A very good start also for Fabian Vettel in the Mercedes-AMG GT3 of Rooster Rojo J2Racing. The brother of four times Formula 1 World Champion completed 20 laps together with his team mates Philip Ellis from Switzerland and Indy Dontje from the Netherlands. The driver trio finished 14thwith a gap of 4:48.915 minutes behind the leaders. Former Formula 1 star Martin Brundle also made it to the finish. He is currently competing in the VLN with the aim to get his big Nordschleife licence to be able to participate in the VLN together with his son Alex later in the season in a more powerful car. He was sharing the Aston Martin Vantage V8 with Marco Müller and Alexander West and they completed the total of 17 laps.

First leaders in the 2019 championship are the race winners Catsburg, Wittmann and Edwards. With 20 cars, the GT3-Pro class figured the greatest number of participants. “My first race in the season and right away my first victory, I wouldn’t mind if things continued this way”, said Wittmann. After this first race, the trio is also in the lead of the ROWE Speed Trophy by VLN in which a prize money amount of 25,000 euro will be awarded. Into second place follow Torsten Kratz, Oliver Frisse and Moran Gott who won class V4 in the BMW 325i of AVIA Sorg Rennsport.

The second round of the VLN endurance championship Nürburgring will take place in three weeks’ time. The 44thDMV 4-Stunden-Rennen is scheduled to run on 13thApril and cover the usual distance of four hours.