Second victory for Black Falcon in 2018 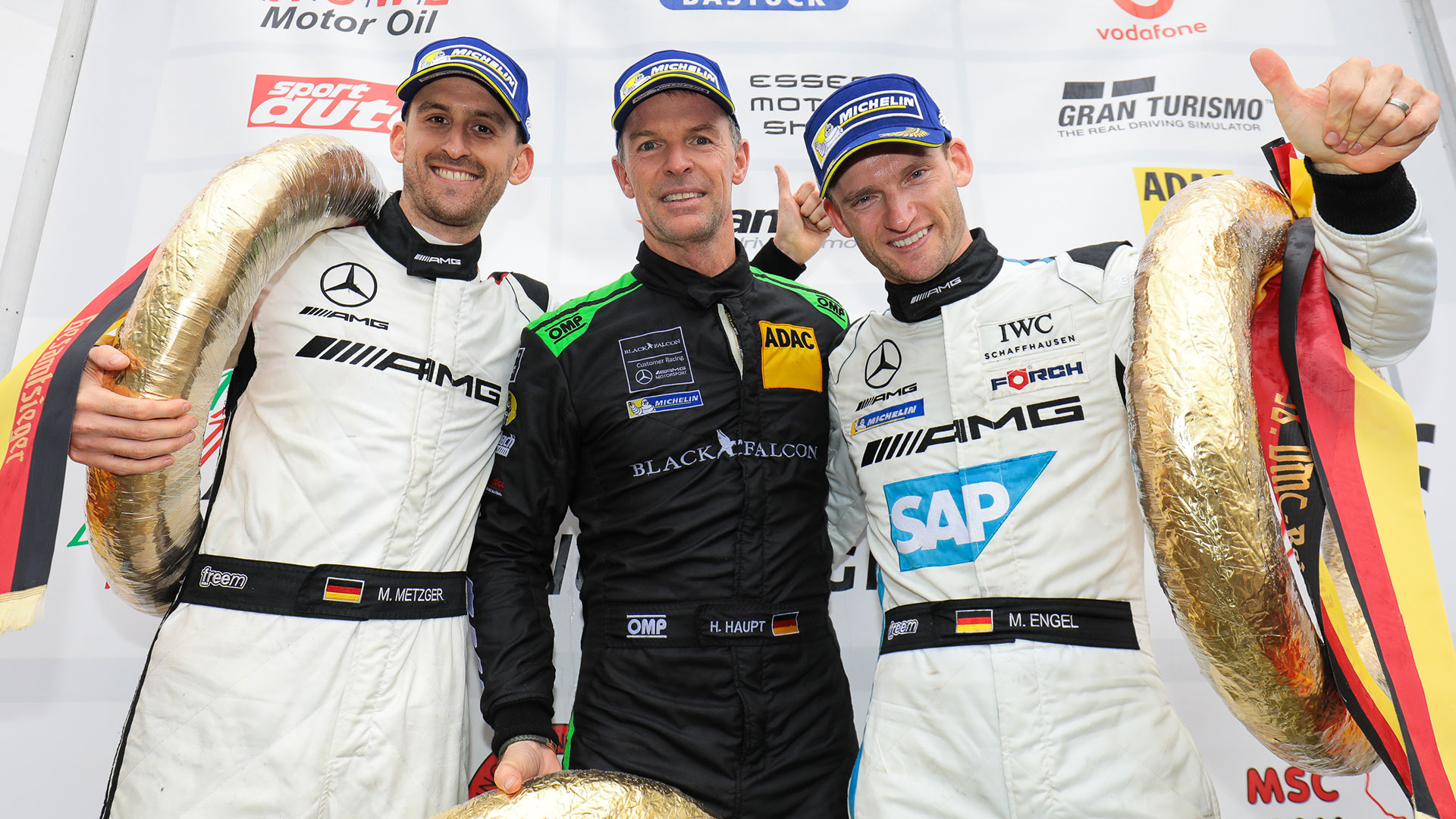 Hubert Haupt breathed a sigh of relief when he got out of the Mercedes-AMG GT3 of Back Falcon beneath the winners podium after the 4 hour race. “That was close”, admitted the man from Munich. Together with Maro Engel and Manuel Metzger, Haupt celebrated the second victory of the season at the seventh VLN race 2018 for the team from Meuspath near the Nürburgring. At the finish, their advance over the second-placed team of Norbert Siedler and Lance David Arnold in the Frikadelli-Porsche was 14.749 seconds. The podium was completed by Peter Dumbreck and Stef Dusseldorp in the BMW M6 GT3 of Falken Motorsports. With a fourth overall place, Georg Weiss, Oliver Kainz and Jochen Krumbach in the Ferrari 488 GT3 of the Wochenspiegel Team Monschau became at the same time the best Premium Team in GT3 class SP9. 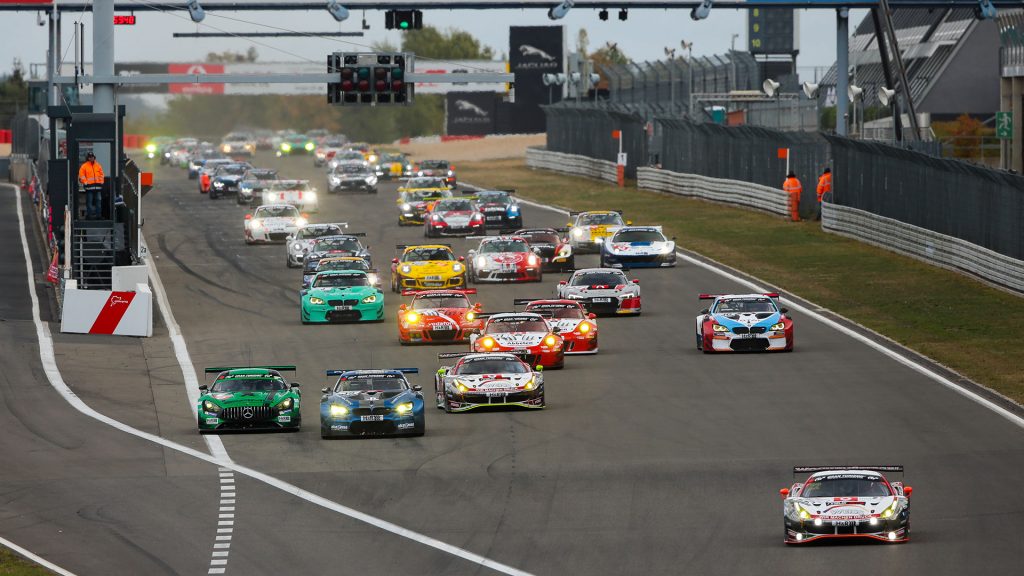 What appears to have been an effortlessly superior job, was in fact a nail-biting event for Back Falcon behind the scenes. The racing team for the Eifel had decided to come in early, after four laps, for their first pit stop. Three more stints of eight laps each were scheduled thereafter. Due to the smooth running of the race with only a few incidents on the track and the prefect conditions around the Nürburgring Nordschleife, a distance of 29 laps would almost have been achieved. “A Code-60 phase in the last two laps saved our victory”, explained Haupt. Eight laps before the finish, the team had taken a fuel amount on board to cover the distance of 28 laps in total. It is almost impossible to cover nine laps with one fuel tank full. “The Code-60 phase was a happy coincidence which plaid into our hands”, said Engel. Hubert crossed the finish line one second after the race time had elapsed. “Would he had to cover one more lap, we would have run out of fuel.”

The Frikadelli duo performed very well in the final part of the race, they closed up to the leading group but were finally not able to see the fruits of their efforts. “We would of course have been happy to win“, said Arnold. “And our chances were very good until the Code-60 phase was notified.” Siedler added: „Second place is ok. A fantastic team achievement was rewarded with a podium position.” The Falken duo, too, was apparently not completely happy with their third place. “Our BMW is running perfectly in terms of performance“, said Dumbreck. “We are very efficient and at level with the top competitors even though this is not completely reflected with our tenth qualifying time. But we definitely have difficulties in overtaking. That was quite disappointing today.“

In fifth place finished the second Frikadelli-Porsche. The sister car of the Wochenspiegel-Team took sixth place. Behind the Porsche 911 GT3 R of GetSpeed Performance in seventh position finished the two Walkenhorst-BMW in eighth and ninth places. The top 10 were completed by Falken Motorsports who were for the first time competing in the new GT3 Porsche of model range 991.2.

The Cayman GT4 Trophy by Manthey Racing saw a very narrow finish. Moritz Kranz and Felix Guenther in the Mühlner car took the chequered flag with an advance of only 1.095 seconds over Ivan Jacoma, Claudius Karch and Kai Riemer in the Cup vehicle of Schmickler Performance powered by Ravenol. Exciting fights occurred also in the TCR class which was for the third time in a row dominated by the Norwegians Håkon Schjærin, Atle Gulbrandsen and Kenneth Østvold in an Audi RS 3 LMS. They won the close fight with Andreas Gülden and Heiko Hammel in the Seat Cupra TCR of mathilda racing who have also celebrated three victories in the touring car class.

Ferrari defended the lead in the standings

With their seventh win in the seventh race, Stephan Köhler and Christian Kohlhaas defended their lead in the standings with the Ferrari 458 of racing one. For the Reinoldus endurance race, Mike Jäger had come back to rejoin the team. The long-time VLN driver had missed the previous race. There is nevertheless still the possibility for him to catch up with his team mates in the championship standings due to the fact that only 7 out of the 9 race results are considered for the final standings. In second position are Heiko Eichenberg and Yannick Mettler who celebrated their seventh podium position with the GT4-BMW of the Team Securtal Sorg Rennsport. The duo has thus so far scored the total of four wins and, including today’s result, three second places.

When the two worst results will be deleted at the end of the season, two teams from the class V4 with the greatest number of starters in the field will play a role again as they have already scored one void result in the current season. Christopher Rink, Danny Brink and Philipp Leisen won for the Pixum Team Adrenalin Motorsport and left 25 cars behind thereby. Their closest competitors, Marcel Mannheller and Carsten Knechtges, finished second.

The eighth VLN race will take place in two weeks’ time. The 50th ADAC Barbarossapreis organised by the MSC Sinzig will take place on 6th October and run over the traditional distance of four hours.