The Falcons were flying to their first one-two win 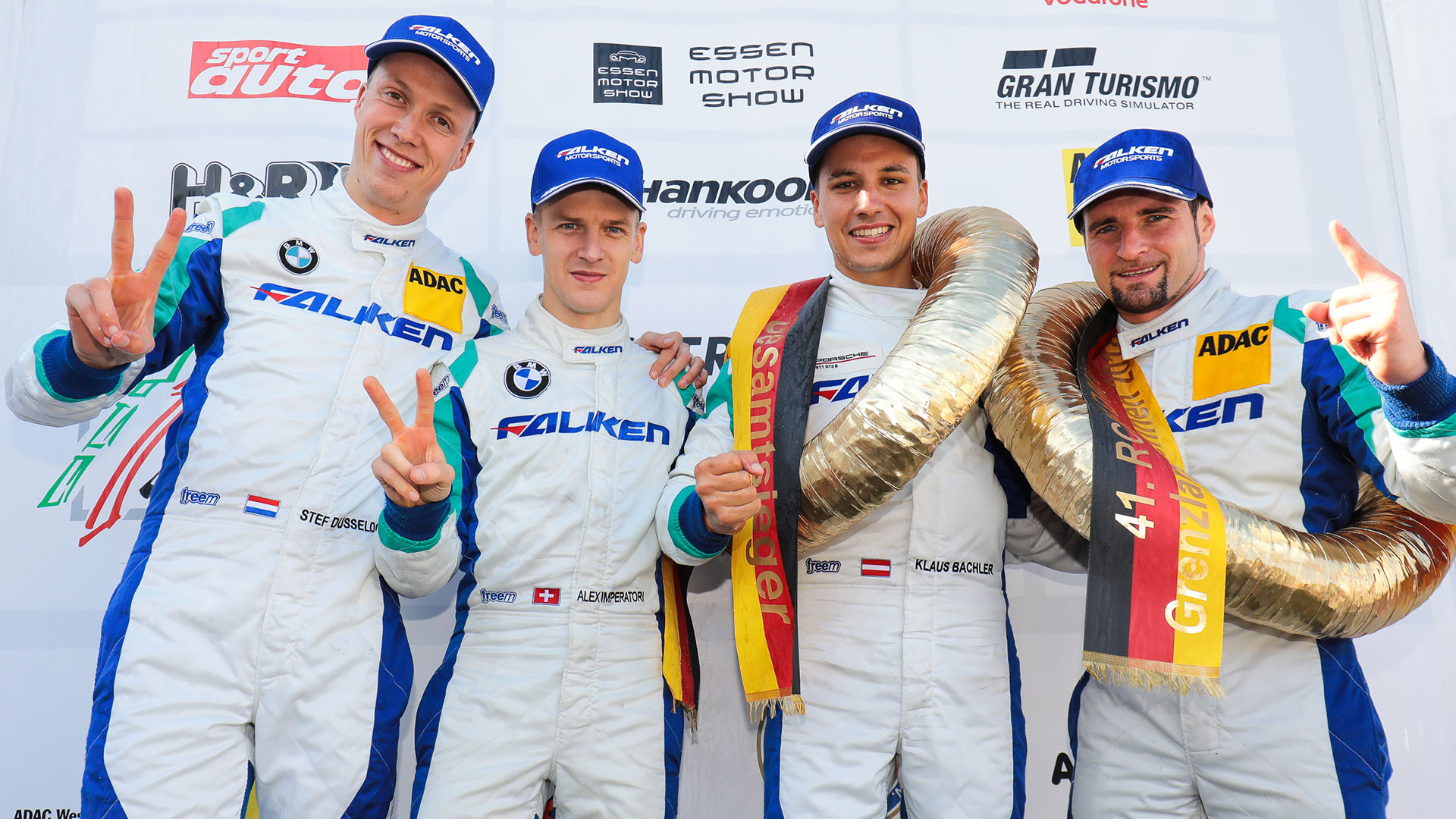 In the animal world, falcons are diurnal fighters. In the Green Hell, the “falcons” of Falken Motorsports set aim at the one-two win at the sixth VLN race and they grabbed it. At the 41st RCM DMV Grenzlandrennen, Klaus Bachler and Martin Ragginger took the victory in their Porsche 911 GT3 R ahead of Stef Dusseldorp and Alexandre Imperatori in a BMW M6 GT3. This was the first one-two win in the VLN for the team of the Japanese tyre manufacturer. Another debut was marked by the team in third place: In the Lamborghini Huracan GT3, Christopher Brück and Michele Di Martino celebrated the first top three position in 2018 for Konrad Motorsport.

Already on the very first metres of the race, Bachler went into the lead ahead of pole sitter David Pittard in the BMW M6 GT3 of Walkenhorst Motorsport and displayed a real firework. In the second lap, he even secured himself a place in the history books. With a time of 7:56.259 minutes, the Austrian race driver set a new VLN lap record. “That was quite a perfect lap”, said Bachler with a smile on his face. “Everything has to be perfect to achieve this. On the last metres, I was lucky that I managed to pass the slowest cars already at Döttinger Höhe whilst my rivals still had suffered with the traffic at Tiergarten.” Apart from Dusseldorp and Imperatori in the sister car, Sheldon van der Linde and Jeffrey Schmidt in the Audi R8 LMS were the only ones who were able to stand up to the performance of the Falken-Porsche. In lap 15, the race was yet over for the so far leading car of Land Motorsport due to a tyre damage. “We would of course have been delighted to win the race”, said Dusseldorp. “And the team had allowed us to push to the maximum. But finally, the Porsche was simply faster. From the team’s perspective, the one-two win is the most important. And we are extremely pleased with our result.” 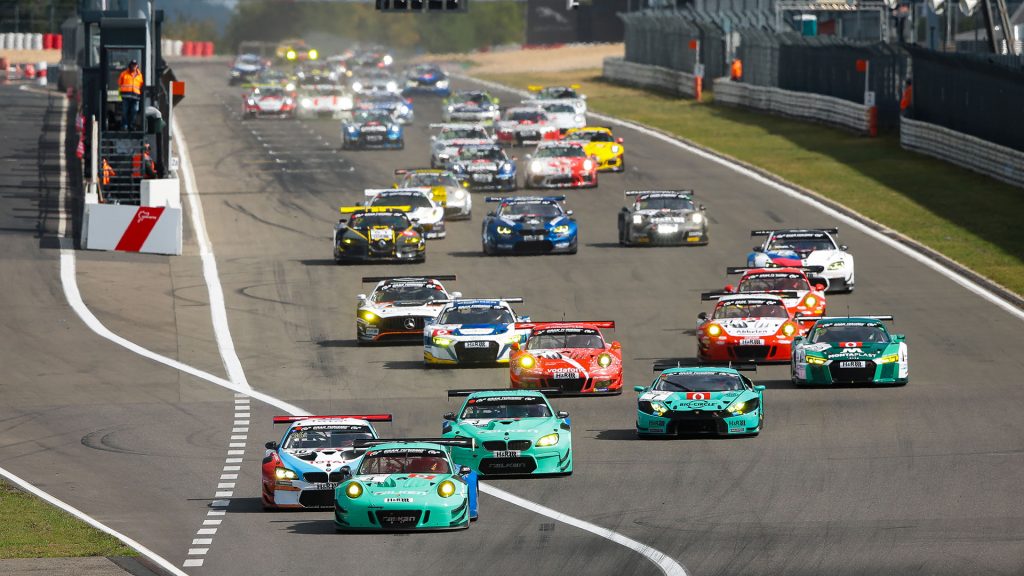 The two drivers in the Lamborghini felt a great relief. “At last, a result in the top three”, said Brück. “This could well have happened already in VLN race three, four or five. Unfortunately, we had a smaller or bigger problem every time so that it is only today that we were able to score that deserved result. “Di Martino added: “Third place feels like a victory for us and is the well-deserved reward for all the hard work both for us drivers and also for all the men around Franz Konrad.”

Behind the top three, Steve Jans, Marek Böckmann, Philip Hamprecht and Adam Osieka drove the fastest car in the GT3-Premium classification. The Porsche 911 GT3 R of the GIGASPEED Team GetSpeed Performance took the chequered flag in place four. “We have changed our tyre partner at the sixth round and we are now much stronger specifically over the distance”, explained Jens and he defines the strategy for the upcoming three races: “The air is extremely thin in the leading group. But we have now established a solid basis on which to build. For sure, we want to score another top-three result during the current year in the overall classification.”

The Team AutoArena Motorsport finished fifth with the Mercedes-AMG GT3, followed by the Frikadelli Racing Team (Porsche) and Walkenhorst Motorsport (BMW). Two teams in the colours of H&R-Spezialfedern scored positions eight and nine. Uwe Alzen Automotive provided the fastest car in class SP7 and Mühlner Motorsport the fastest Cup-2 vehicle. The top ten were completed by Ralf Schall who celebrated in class H4 at the same time his 101st class win, as usual in a team with Christopher Gerhard, in the Porsche 911 GT3 Cup (997).

The decision in the class of VLN production cars up to 2,500 cc cylinder capacity (V4) which figured the greatest number of starters (18 cars) was also filled with suspense. Marcel Manheller and Carsten Knechtges in the Manheller-BNW prevailed over Christopher Rink, Danny Brink and Philipp Leisen in the counterpart of Pixum Team Adrenalin Motorsport, their advance at the finish was 1.426 seconds.

Change in the top of the standings

With their sixth victory in the sixth race, Christian Kohlhaas and Stephan Köhler went into the championship lead. Whilst the Ferrari duo was victorious, the so far leaders in the standings, Norbert Fischer, Christian Konnerth and Daniel Zils had to retire their Porsche Cayman of the Pixum Team Adrenalin Motorsport after six laps. In the class of VLN production cars up to 3,000 cc cylinder capacity (V5), the Team Care For Climate around rapper Smudo and former DTM driver Tom von Löwis celebrated a victory for the first time in the current season. Their car was driven by Daniel Blickle and Niklas Steinhaus.

Accompanied by the frenetic cheers of their fan club from Norway, Håkon Schjærin, Atle Gulbrandsen and Kenneth Østvold celebrated the second successive victory in the TCR class with their Audi RS 3 LMS. Østvold marked his tenth class win, Formula 1 commentator Gulbrandsen his 14th and Schjærin his 23rd. The trio from the far North once again dominated over the crew of Andreas Gülden and Moriz Oestreich in the Seat Cupra TCR of mathilda racing. Into third position finished Benedikt Gentgen, Martin Pischinger and Lukas Thiele in another Seat entered by FEV Racing.

The seventh round of the VLN endurance championship Nürburgring will take place in three weeks. The 58th ADAC Reinoldus-Langstreckenrennen organised by the Dortmunder MC on 22nd September will run over the traditional distance of four hours.