Leonard Weiss: ”I really want to go for it “ 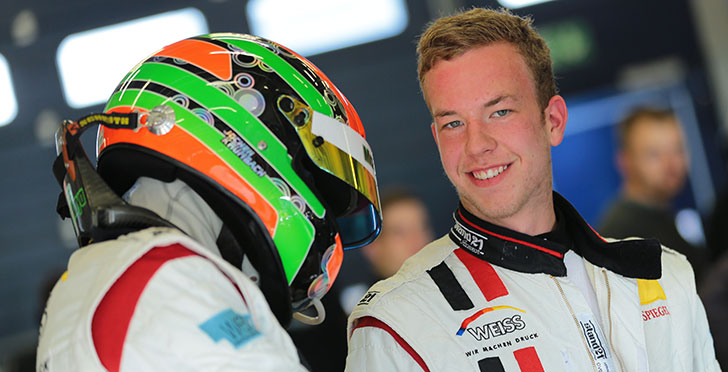 There will be another father-sun duel in the upcoming VLN season. The Wochenspiegel Team Monschau will enter with a second Ferrari 488 GT3 in class SP9. One of the drivers will be Leonard, the son of Georg Weiss. This second ‘Cavallino rampante’ will be managed by Rinaldi Racing. With Christian Menzel, the 19-years old driver will be supported by an experienced driver. VLN.de talked to the “young wild” about the fascination of motorsport and more specifically of the Nordschleife and about his targets for the year 2018.

How did you get involved in motorsport?
My dad has been exercising motorsport every since I can think. He took me to the VLN and to the Nordschleife when I was still a child. I thought it was really cool when he competed in races. As far as I am concerned and when I was a youngster, I only did some karting now and then in a hall together with some friends, just for fun. I finally became really fond of automobiles when I was 18 years old and got my driving licence and my first car. And then things just happened.

What fascinates you about the Nordschleife?
In the past, I always used to drive only at the Nordschleife with my Playstation. It is simply a track which combines anything that is interesting. The conditions change constantly. It is always a special challenge and every time you experience something new. You never finish learning. The Nordschleife is a legend.

What do you like with the VLN?
One thing is that you compete in races with many different cars and in many different classes. This mixture is exciting. You don’t simply compete in a race, the perfect strategy is amongst others of utmost importance. You also have to learn how to manage best the long distance of circuit with all these most diverse cars. You have to look after the others and pay attention to who is approaching from behind and so on.

Last season, you have already competed in five VLN races. Tell us about your impressions.
In 2017, I started with the Cayman GT4 in the RCN. Then I participated in two rounds with the small Cayman of Andre Krumbach in class V5. That was indeed a big change, a totally new experience for me. To drive a car with manual gear shifting and clutch. I did the last three races then in class GT4 again.

You will now change from the Cayman to the Ferrari. You will compete in the top class of the VLN. You must be really looking forward to this challenge?
Yes, of course, I am incredibly happy about that and I really want to go for it. First of all, I would like to learn how you drive such a car, how it will behave in certain situations. I consider this year as the entry into the GT3 sport. It is not about winning yet. I am of course nevertheless also ambitious.

Have you already been able to collect some experience with the Ferrari?
I drove over the Grand Prix Circuit with the Ferrari on the trackday. That was very impressive and totally different compared to the Cayman. These are two different worlds. In terms of aerodynamics, brakes, suspension and of course speed, this is a difference like night and day.

With Christian Menzel, you will have a very good coach to support you. You will be able to learn a lot from him?
I also think that he is the right man at the right place. He was also there during the trackday. After a few laps which I completed with him and also after the discussions which we had, I already realised that I got faster and faster thanks to his input.

So you will be able to show your father in the VLN 2018 what’s what in SP9?
Yes, we already keep on teasing each other about his. We will make a first test at the Circuit de Catalunya in Barcelona. My dad said that after two days, I should be faster than him and I am confident in this regard.

What is your target for 2018? Do you perhaps think of exercising motorsport on a professional basis in the future?
First of all, I wish to complete my business studies at the Aachen University of Applied Science. Time will then show how things will go on. Currently, I currently this basically as a pure hobby of mine.