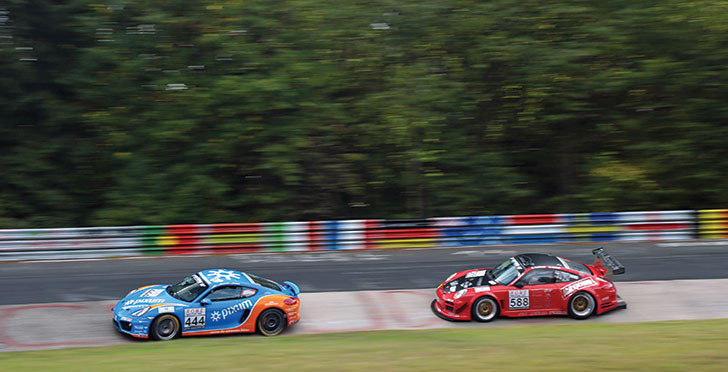 Sometimes, you will realize major differences between cars of the same make. It is not that one Porsche is like any other. We have examined in detail two specimen. On the one hand, there is the Porsche Cayman 981 of the Team PIXUM Adrenalin Motorsport, which is eligible to start in class V5, and on the other hand the Porsche 997 GT3 Cup of TAM-Racing in a widebody version, classified in class H4.

“We want to practice great motorsport and need a lot of starters to take as many points as possible and to maintain a chance in the championship. People really enjoy driving this car even though it is basically not that powerful. You have a competition with equal cars, so the focus lies on the drivers much more than in various other class”, says Team Principle Matthias Unger in view of the motorsport participation of the 275 HP strong PIXUM Cayman with its 2.7 litres six-cylinder flat engine and a seven-gear dual clutch transmission. It accelerates from zero to hundred in 5.4 seconds, with a maximum speed of 266 km/h. “We bought it as a new car which comes up to a price of 50,000 euro, taxes excluded. In addition, the components which we installed in about 350 working hours came up to the total amount of approximately 35,00 euros. All together, we speak of productions costs of 100,000 euros net. That is a crazy figure for a production car”, explains Unger further.

The car was fitted with a safety cell, a completely modified exhaust system, a competition chassis, an electrical extinguishing system and a general circuit breaker, six-point safety harness, a Recaro racing seat and a light battery to safe weight. The new steering wheel allows for the operation of the dynamic electronic stability program. “This is an expensive gimmick which is rather uncommon elsewhere in the V-classes”, says Unger. The brake system was updated as far as permitted by the regulations. The weight of the car with full fuel tank is 1,347 kilogrammes, with a total fuel capacity of 70 litres. Gearbox, engine, all bodywork parts, the complete electronic system and the axle components are original parts. In its VLN configuration, the car achieves constant lap times of below 9:30 minutes. The fastest lap time so far was 9:18 minutes.

“The brakes are very efficient and the car has a very good handling when entering corners. It is very difficult to control a vehicle equipped with a mid-engine when driving at the limits in high-speed corners. There are only a few drivers who are able to stay below 9:20 minutes with this car. Many people think ‘well great, it is easy to be among the front runners in the class’ or ‘the car is superior in terms of performance’. Yet, the car is quite difficult for everyone at the beginning. You can do it, but only up to certain lap times. The car is fantastic for anyone achieving a time of 9:40. But if you wish to do a time below 9:20, you will encounter some difficulties”, explains Unger.

A little bit superior in terms of power is the group H Porsche of the year 2008, driven by Christopher Gerhard and Ralf Schall. It has a performance of 490 HP generated from an engine cylinder capacity of almost 4.0 litres. The maximum rotational speed is 8,500 rpm. The fastest lap time achieved in the VLN was 8:24 minutes. The car was bought in 2015 and modified by TAM-Racing. “There were two reasons for which we wanted to change the standard slim Cup configuration. A great number of used tyres was left from our participations in the Carrera Cup in the years 2014 and 2015 but we couldn’t fit those sizes. With the conversion, we were able to use this tyre contingent and saved money”, informs Gerhard and he adds: “The welcome side effect was that you are more or less perceived like a current Cup vehicle out on the track. The current 991 is wider in its original version already. So we killed two birds with one stone with this rather chunky vehicle.”

The costs for the conversion came up to about 30,000 euro. The components for the widening and the vehicle paintwork executed by ZIM-Speed costed 10,000 euro. On top came the modification of ten sets of rims which costed 10,000 euro and a switch panel of Holinger for 7,000 euro so that the car was also fitted with a steering-column gearshift. Many working hours of course in addition as, apart from these modifications, the car had to be completed revised. As the revision would have been to expensive, it was last winter fitted with a new Holinger gearbox. “Basically, we only widened the car. It has wider rims with the current Cup tyres, 27 Michelin at the front and 31 at the rear, just like the Cup2 class vehicles. The three-pieces rims had to be widened so that we could fit the tyres. Of course, the bodywork had to be widened, too, as a consequence to accommodate the wheel-tyre units. But anything beneath, the wheel carriers, the drive shafts, the ‘Nordschleife’ suspension, even the tyres, everything is series-production. In this sense, the car is not significantly modified. We also fitted a bigger wing as well as splitter and diffusor for the sake of aerodynamics”, says Gerhard and explains: “Unmodified, the car is five to ten seconds slower than a current Cup2 car. So we are roughly on a pair. The ergonomics of the pedals is not completely perfect as it was common to brake with the right foot in those days. Otherwise, the car is absolutely fine in terms of driving characteristics. It is a really cool car.” 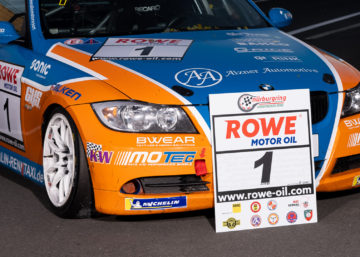 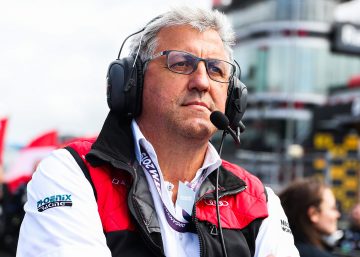 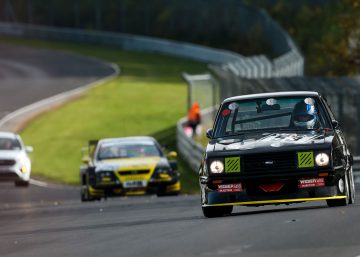