Sample calculations to the 2017 championship? 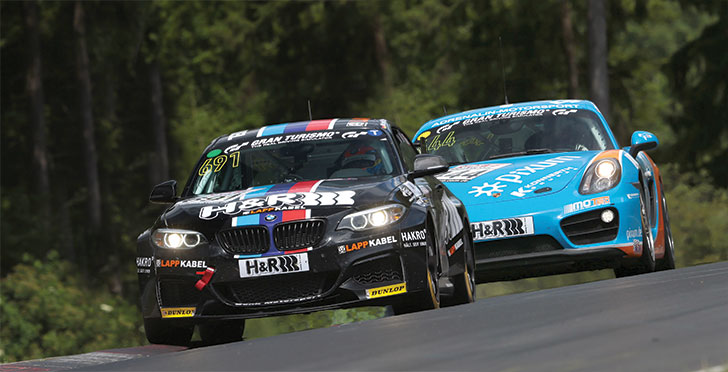 The battle about the drivers’ title in the VLN endurance championship Nürburgring was highly competitive this year – more competitive than in the years before.

There had been four different championship leaders throughout the season and three of them turned out to be serious candidates to take the title. Those were Norbert Fischer, Christian Konnerth and Daniel Zils in the Porsche Cayman of Pixum Team Adrenalin Motorsport, Marcel Manheller in a BMW 325i and finally Moritz Kranz, Hamza Owega and Alex Schula in the Porsche Cayman of Mühlner Motorsport. There is, however, one man who could still overtake them and defend his title of last year, Michael Schrey. The driver of the Bonk team participated in the 2017 season again in the BMW M235i Racing Cup class – and most times as solo driver. It was only at the highlight of the season, the ROWE 6 Hours ADAC Ruhr-Pokal-Rennen, that he and his last year’s team mate Alexander Mies took turns again behind the steering wheel. If he manages to make it, he will be the first driver within the past 20 years to succeed in gaining the title twice in a row. Previously this happened in 1996 and 1997 and it was Dirk Adorf in an Opel Astra who achieved this same amazing result.

It was a stony and difficult road
“Allez les bleus”, was the slogan after the first round of the 2017 season. The GT3 class had the greatest number of cars and the overall winners Romain Dumas, Fred Makowiecki and Patrick Pilet thus also became the first championship leaders of the season with their Manthey-Porsche 911 GT3 R. From amongst the protagonists, Manheller won class V4 in the first VLN race and was shown in third position in the championship standings. Fischer, Konnerth and Zils were also victorious and thus fourth in the championship. Still far behind at this point of time were Kranz, Owega and Schula in seventh position and Schrey in place 14 – the champion of last year finished only in third position of the BMW Cup class. At the second round and quite early in the season, Schrey took a zero score after his retirement and he dropped back into 71st position in the table. The Adrenalin trio won again (3rd in the standings), the Mühler trio finished in second place (11th in the standings), Manheller became only third (8th in the standings). Makowiecki, who took second overall position in a row together with Richard Lietz, defended his championship lead.

After the 24h Race, the number of competitors in GT3 reduced in quantity and the primary VLN classes moved back into the focus. And right away, Fischer, Konnerth and Zils went into the championship lead after their third victory. With another triumph at the fourth race, they defended their lead in the standings. At round five then, the crew of Adrenalin failed for the first time and dropped back into eighth place in the table.

The Mühlner trio saw their chance and made it to the top with three successive wins after VLN race five. Schrey, too, took three victories in a row and regained a lot of ground. After round five, he was in tenth place in the standings. Manheller did not succeed in moving up into the top but nevertheless remained within reach with his second championship position after having taken second, third and first places in the following race results.

Whilst Kranz, Owega, Schula and Manheller defended their positions after the sixth round, Fischer, Konnerth, Zils and Schrey on their part tried to minimize the damage. However, Schrey improved much more as the number of competitors in his class was higher. His positions after race six: four and five.

After the seventh race and his third V4 win in total, Manheller went into the championship lead and overtook the Mühlner trio whilst Kranz, Owega and Schuls took a zero score with eighth place in the Cayman Cup class.

The first of two zero scores in the standings was applied after the eighth race. All of the four championship candidates won their respective class. With seven class wins, the Adrenalin trio is in first championship position before the final, ahead of Schrey, Manheller and Kranz, Owega, Schula.

Using simple calculations: Who will take up which position and in which case?
Assuming that, at the final round, the numbers of starters in classes Cup 5 (Schrey), V5 (Fischer / Konnerth / Zils), V4 (Manheller) and Cup 3 (Kranz / Owega / Schula) were identical with the ones at race eight and all the drivers confirmed their results of the penultimate round, Schrey would finish with a lead of 0.75 points.

However, three of M235i Racing Cup cars became victims of an accident in the Aremberg corner so that the number of cars in class Cup5 could turn out to be less at the finale. But also in this case, Schrey would still be safe: Assuming that he wins the class against another four competitors, he would still win with a razor-thin lead of 0.03 points. If, as an exception, Schrey became only second, 14 competitors in his class would be enough for him to remain in the lead. With a third place, he would need the total of 25 Cup-BMW in his class. From this point, any other numbers games are starting to become unrealistic.

Conversely, additional participants could enter class V5. So 9.75 points could for example be scored for a first place in a class which figures 20 cars. Apart from the zero points score of the Adrenalin team at round five, 9.59 points (1st out of 12) is the lowest result achieved by the trio which could thus be eliminated. Their total score of the eligible seven results would thus increase by 0.17 points. Schrey would hence need to achieve at least second place out of 18 competitors to defend his title and to remain in the lead. A sudden increase of eight cars as supposed in the example seems at first utopian, considering that in 2017 there were never more than 15 V5 cars. There is nevertheless a number of examples in the long history, and even in the recent past of the VLN, where exactly this has happened. One should never say never.

Positions one and two in the drivers’ championship are already awarded to Schrey and Fischer / Konnerth / Zils but the order is still open. There is still a close battle going on about third place: If Kranz / Owega / Schula once again took first place with nine competitors in their class, a first place against six competitors would be enough to clinch third championship position. If he finished second, the total of 21 cars in V4 would be needed on the starting grid. A second place with 18 cars in the class would thus not be enough either to leave the Mühlner trio behind.