A get together of top stars 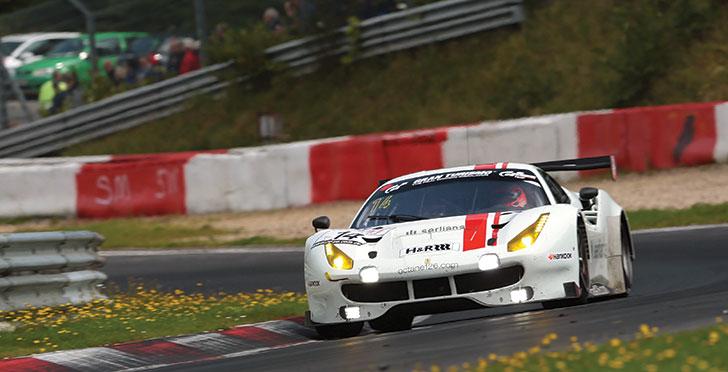 At the season final in the VLN 2017, it will all be about the decision in the championship and the last prestigious victory of the year. The big question: Who will be able to start the winter break with a good feeling and who not?

The 42nd DMV Münsterlandpokal marks the ‘grande finale’ of a fantastic VLN season 2017. And the race, at which, in addition to the traditional cups, the successful drivers will receive an original Westphalian ham as trophy from the organiser, will seamlessly complete the series of the previous top-class events. About 150 cars, from production-based touring cars up to the most sophisticated race cars, are ready to celebrate the final round at the Green Hell adequately.

The Swiss are coming!
The otherwise so peaceable and neutral Swiss are ready to conquer the Nordschleife. Following the example of Marcel Fässler and Nico Müller, who have already been celebrating successful results at the “Green Hell”, three drivers from Switzerland will for the first time participate in the VLN finale 2017 with top cars. The Swiss Team Octane 126 has entered a Ferrari 488 GT3 for Fabio Leimer and Simon Trummer who will be supported by Björn Grossmann from the Black Forest. The two drivers from Switzerland have been successful in single-seater racing. In 2013, Leimer became champion in the GP2 series and in 2015, he was reserve driver for Manor in the Formula One World Championship. Trummer, too, competed amongst others in the GP2 for four years and participated in 2014 and 2015 for the Team By Kolles in the WEC and in the Le Mans race. Grossmann has been involved in the Ferrari Challenge Europe since 2006 and took the title in the one-brand cup in the years 2015 and 2016.

Another Swiss race driver, entered by Walkenhorst Motorsport in a GT3 car, will make his debut in the VLN at the Münsterlandpokal. The 31 years old Jonathan Hirschi “went astray” between 2012 and 2015 in the World Rally Championship and made his debut in Le Mans already in 2010. This year, he finished in seventh position with the Oreca 7 of CEPC Manot TRS Racing. He competed in the race together with Jordan Tresson.

At the ninth VLN race, the three Swiss drivers will meet very competitive drivers who belong to the ‘crème de la crème’ at the Nordschleife. Montaplast by Land Motorsport has reunified the dream team of the year 2016: Connor De Phillippi and Christopher Mies. Whilst the American was triumphant at the sixth round together with Robin Frijns, Mies has this year not been able to score a VLN victory up to date. The finale should be the perfect opportunity to complete this gap.

After his guest performance with Bentley at the first two races of the season, the nine times VLN winner Christian Mamerow will return into a well-known cockpit. At the side of Frank Stippler, he will start in an Audi Audi R8 LMS of Phoenix-Racing. Stippler himself will complete a double start. In the Frikadelli-Pro Porsche, he will share the steering wheel with Norbert Siedler and Alexander Müller. The two cars entered by Falken Motorsport will also be driven by top drivers. The drivers in the BMW M6 GT3 will be Peter Dumbreck and Stef Dusseldorp, and the Porsche 911 GT3 will be driven by Klaus Bachler and Romain Dumas. Black Falcon has entered a Mercedes-AMG GT3 for Hubert Haupt and Abdulaziz Al Faisal and the Wochenspiegel Team Monschau will bring another Ferrari 488 GT3 with the regular crew comprising Georg Weiss, Oliver Kainz and Jochen Krumbach to the start. In class SPx, the Manthey-Porsche with start number 911 and drivers Fred Makowiecki, Sven Müller and Lars Kern will again take part.

GT4 category is growing
In addition to the two Mercedes-AMG test teams of Black Falcon and Uwe Alzen Automotive, HTP Motorsport has now also entered a new Mercedes-AMG GT4 for the Nürburgring race. The cockpit will be manned by Indy Dontje from the Netherlands and Maximilian Götz. In the test phase of the race car from Affalterbach, former DTM driver Götz may still join the team. As the car has not passed it final homologation yet, these GT4 race cars with the star on the bonnet will provisionally still start in class SPX. Once this homologation process is completed, the car is of course also eligible in the GT4 class (SP10). Götz will then no longer be allowed to start as he holds the Platin status pursuant to the classification list of the World Motorsport Federation FIA. Class GT4 is reserved for ambitious amateur drivers under the exclusion of professionals.

Who is going to take the title?
The champions will be crowned at the final race – the VLN series remains thrilling until the very last round. Currently in the lead are Norbert Fischer, Christian Konnerth and Daniel Zils with their Porsche Cayman of Pixum Adrenalin Motorsport. Michael Schrey, though, who has been competing in most of the races this year as solo driver with the BMW M235i of Bonk Motorsport, stays right on the heels of the championship leaders. After six victories in a row, Schrey will be able to secure the championship in favour of himself if he wins a seventh time. His competitors can hereby not do anything else but observing the running of the race because they all have already scored the maximum of seven results which are taken into consideration for the final classification.

The 42nd DMV Münsterlandpokal will start on Saturday at 12 o’clock exactly and run over the distance of four hours. The positions on the starting grid will be based on the results achieved previously in the qualifying practice. Between practice and the race, the fans will have the possibility to get very close to the protagonists during the pitwalk and on the starting grid.