Battle in the rain: A case for Manthey-Racing 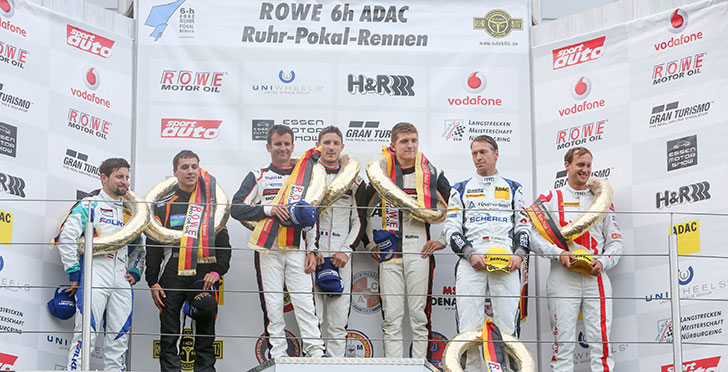 It was all about experience at the ROWE 6 Hour ADAC Ruhr-Pokal-Rennen, the fifth round of the VLN endurance championship Nürburgring. Changing weather conditions at the most demanding race track of the world – that was a clear case for Manthey-Racing. With a brilliant strategy, Romain Dumas, Kevin Estre and Mathieu Jaminet dominated the race with their Porsche 911 GT3 R and took the chequered flag with an advance of 3:18.233 minutes ahead of Martin Ragginger and Klaus Bachler in the nine-eleven of Falken Motorsport. The top three were completed by Frank Stippler and Peter Terting in an Audi R8 LMS of Phoenix-Racing.

The lead at this highlight of the endurance racing championship changed eleven times and it finally ended with the 13th win of a Porsche race car at a VLN 6h Race. Dumas took his sixth VLN victory whilst Estre and Jaminet made their debut on the top step of the prizegiving podium. “Our strategy was absolutely perfect”, said Dumas and Estre added: “We were on slick tyres for the first three stints before we changed to rain tyres which we maintained until the end. During the last three hours, there was no moment in which you would have needed slick tyres for more than one lap.” After about five and a half hours race time, the Manthey victory was nevertheless in danger for a moment. Earlier than expected, the fuel indicator in the cockpit was flashing and indicated a lack of fuel. “We then advanced the pit stop, just to be safe.”

Their strategy prevented a possible triumph of the two chasing cars. “There were a lot of opportunities today to make mistakes”, admitted Bachler who had taken pole position for Falken Motorsport in the timed practice with a time of 8:10.110 minutes. The situation had been extremely close in chasing times as the top ten were separated by only 10.111 seconds. “Once, we made a mistake in the choice of tyres. And to be honest, I was almost scared like hell in this phase when I was on slick tyres and, all of a sudden, there was water on the track at the Schwedenkreuz. I had some aquaplaning, went off the track and had a slight contact with the guardrails. Fortunately, without any consequences.” Considering the circumstances, his team mate Ragginger was happy with the result: “Second place is quite good under these conditions. Others were less lucky.”

Stippler agreed with the Austrian: “We can be really happy with our third position”, he said. “We, too, were not always lucky with our choice of tyres and thus lost time. We were quite competitive when it was dry. When you are on slick tyres in the rain at the Nordschleife, you are sliding in almost every corner. That was exciting and I am happy that we made it to the finish.”

Behind the top three, the Haribo Racing Team with the Mercedes-AMG GT3 finally missed the podium by only 11.448 seconds. Into fifth place finished Norbert Siedler and Alexander Müller in the Frikadelli-Porsche. The Mercedes-AMG GT3 of Black Falcon crossed the finish line in sixth place, followed by the recently winning BMW M6 GT3 of Falken Motorsports with drivers Alexandre Imperatori and Jörg Müller in seventh position. The fastest Pro-Am vehicle of class GT3 was driven by Claudia Hürtgen, Felipe Fernandez Laser and Frederik Nymark who finished eighth.

Successful GT4 debut for the team around Uwe Alzen
The Mercedes-AMG Test Team Uwe Alzen Automotive had a successful debut with the new Mercedes-AMG GT4. Within the six hours’ race time, Fabian Hambrecht, Mike Stursberg and Thomas Jäger completed 35 laps at the 24.358 kilometres long combination of the Nürgurgring Grand Prix Circuit and the Nordschleife and finally finished in 16th place. “I am very happy with our first participation of the new GT4”, Jäger said. “We have learnt so much. It was the first test in the rain at the Nordschleife. The car was very reliable.”

Norwegian quartet to take the first win for Audi in the TCR class
Their first win in the TCR class celebrated the Norwegian team of Håkon Schjærin, Atle Gulbrandsen, Kenneth Østvold and Anders Lindstad. The Audi RS3 LMS quartet from the far North prevailed over Bradley Philpot, Jürgen and Joachim Nett in the Peugeot 308 Racing Cup, with the latter celebrating their second place almost like a win. Into third place finished Roger Vögeli, Roland Schmid and Markus Oestreich in a Honda Civic Type R TCR.

The next round of the VLN endurance racing Nürburgring will already take place in two weeks’ time. The 40th RCM DMV Grenzlandrennen is on the calendar on the 2nd of September and will run over the usual distance of four hours.