May it be a little more? 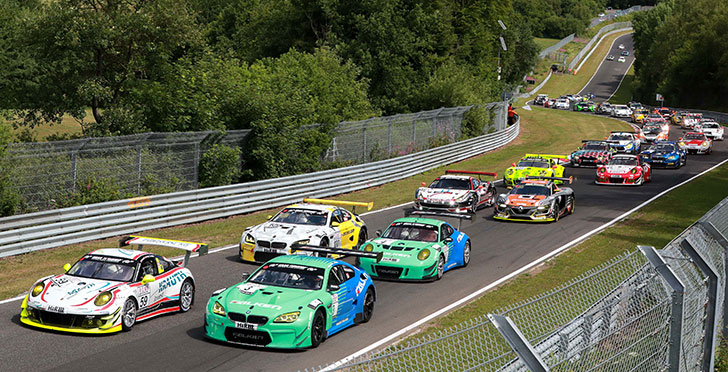 The summer break in the VLN endurance championship Nürburgring has come to an end –the action finally starts again at the “Green Hell”. The worldwide biggest grassroots series will start into a brilliant second half of the season with the ROWE 6 Hour ADAC Ruhr-Pokal Race on 19th August 2017. 172 cars are entered for the fifth round of the 2017 season which will run over 1.5 times of the usual distance and they will fire up the many fans around the legendary Nordschleife.

The new Mercedes-AMG GT4 which is supposed to be delivered to the customers by the end of the year will also make its debut in the VLN. To finalise the last details of the cars under racing conditions, even two Mercedes-AMG test teams will take part in the 6h Race: Black Falcon and Uwe Alzen Automotive. The VLN champions from Meuspath near the Nürburgring have entered the drivers Stefan Karg, Fidel Leib, Alexander Toril Boquoi and Jan Seyffarth. The participation of Fabian Hamprecht, Mike Stursberg and Thomas Jäger in the sister car will be managed from the pit wall by team owner Uwe Alzen. The expert at the Nordschleife, who has already taken 13 victories in the VLN, will then himself take part in three more VLN races during the remainder of the season. As both cars are development vehicles which are not yet homologated in GT4, they will compete in class SPX.

A similar situation for the new BMW M4 GT4 which is competing in class SP8T for the second time. Entered by ROWE Racing, the drivers ‘Iain Wright’, Thorsten Drewes, Dirk Adorf and BMW Motorsport junior Ricky Collard will take turns behind the steering wheel. The latter hereby is the example for three other juniors of the car manufacturer from Munich. Mikkel Jensen, Dennis Marschall and Beitske Visser will make their debut at the Nordschleife with a BMW M235i Racing Cup entered by the Team Securtal Sorg Rennsport. The target of the rookie team is to complete the mandatory number of laps in a “small car” to obtain the ‘big’ DMSB Permit Nordschleife.

Many candidates for victory, but there can be only one winner
Since long, a successful result in a VLN long-distance race is not any more based on tactics. Like in a sprint race, full speed action par excellence is provided – and this as a multiple. The provisional list of entries for the 6h Race comprises 16 GT3 cars which must in any case to be considered as hot candidates for a victory. Manthey Racing (Porsche 911 GT3 R) and Falken Motorsports (BMW M6 GT3) who have already scored victories in the current season wish to continue on this road of success. On the other hand, a number of well-known racing teams wish to finally take their first win of the season: ROWE Racing (BMW), the Audi teams Montaplast by Land-Motorsport and Phoenix-Racing as well as the Mercedes-AMG-Teams of Black Falcon and Haribo-Racing. Frikadelli-Racing (Porsche) and Walkenhorst Motorsport (BMW), though, wish to finish in a top position, too.

Next generation is approaching
The sons of two long-time VLN participants will also make their debut in the endurance championship with the ROWE 6 Hour ADAC Ruhr-Pokal Race. Together with his father Herbert and Thomas Leyherr, Hendrik von Danwitz will compete in his first VLN race in a BMW M235i Racing Cup of Lifecarracing. The late-comer in racing – up to the age of 14 playing football was still on top of the favourite hobbies of the 18-years old – started to compete in touring car races this year after his successful start in karting.

A Porsche Cayman entered by Wochenspiegel Team Monschau will be driven by Leonard Weiss – the son of Georg Weiss – together with the two experienced drivers Jochen Krumbach and Uwe Legermann in class V5 (VLN production cars up to 3,000 cc cylinder capacity). After having completed his training to obtain the Nordschleife Permit, Weiss jr. first of all started in races of the Rundstrecken-Challenge Nürburgring. He competed in three RCN races with the WTM-Cayman and took fifth position in class RS7 three times.

New cars in classes TCR and KTM
Two other upcoming VLN classes are also growing: TCR and Cup X. In the touring car class, which was introduced this year, Raphael Hundeborn, Marc Legel, Roman Löhnert and Stephan Kuhs form the first customer team relying onto an Opel Astra TCR. The class figures moreover the brands of Audi, Honda, Peugeot, Seat and Volkswagen. Axel and Max Friedhoff will have their first participation in the KTM X-BOW Cup powered by Michelin.

Grassroots Sport: Strong figures at the highlight of the season
The figures for the fifth round sound fantastic: The 172 cars of 20 different manufacturers shown in the provisional list of entries will be driven by not less than 467 cars from 29 nations – amongst them eight ladies drivers. The cars are classified in four categories: 56 VLN Specials, 43 series based VLN production cars, 60 Cup vehicles and 13 race cars according to Group H Regulations.

“High Noon“ in the Eifel: The racing show starts at 12 o‘clock
The start lights for the ROWE 6 Hour ADAC Ruhr-Pokal Race will change to green at 12 o’clock exactly. The starting grid will be based on the results achieved in the timed practice to take place between 08h30 to 10h00. As long as the engines are quiet, the fans at the Nürburgring will have the possibility to take a closer look to the race cars during a pitwalk and on the starting grid where they will be able to meet the top stars of endurance racing. Tickets for entrance into the paddocks and to the open grandstands at the Grand Prix Circuit are available on-site upon payment of 15 euro. Young people up to the age of 14 years have free access.