After 18 years, Falken Motorsport takes a first victory at the Nordschleife

After 18 years, Falken Motorsport takes a first victory at the Nordschleifeadmin9. July 20179. July 2017 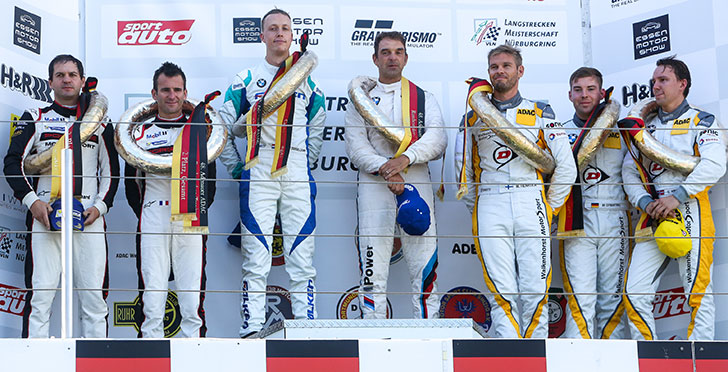 The team of Falken Motorsports was beaming brighter than the sun this Saturday at the Eifel race track: Stef Dusseldorp and Jörg Müller took the first victory for the Japanese tyre manufacturer in the “Green Hell” at the fourth round of the VLN endurance championship Nürburgring. 6,610 days ago or, in other figures, 18 years ago, the first race car in the Falken colours appeared at the Nürburgring, back then a Nissan Skyline. At the 48th Adenauer ADAD Rundstrecken-Trophy, the BMW M6 GT3 of the team, which has been entered since the beginning of the season in addition to the long-time familiar Porsche 911 GT3 R, was successful. Their advance at the finish was 34.519 seconds. The battle about second position was a really tight one this time: Richard Lietz and Romain Dumas finally prevailed in their Porsche 911 GT3 R of Manthey-Racing with a razor-thin gap of 0.286 seconds before Christian Krognes, Michele Di Martino and Matias Henkola in the BMW M6 GT3 of Walkenhorst Motorsport.

“This victory is something very special”, said Jörg Müller happily. “It feels like an eternity that I know the Falken team – they absolutely deserved this win.” The Falken duo laid the foundation for their success with position two in the qualifying. Start driver Müller then went into the lead in the second race lap. “Thereafter I was really lucky in my first stint when I had to lap other cars, so I could move ahead in the lead. The M6 was then running like clockwork and our strategy worked well.” It was not the first time that a victory was within reach for Falken Motorsport, this happened last time at the VLN season opener. “We were so close then”, said Dutchman Dusseldorp who celebrated his first win in his seventh GT3 race. “All the nicer so that we made it now.”

Specifically the battle about second place in the final part of the race provided spectacular action at the “Green Hell”. Krognes in the Walkenhorst-BMW was chasing Dumas in the Manthey-Porsche around the Nordschleife at a distance of only a few centimetres. Hereby, the cars had several contacts. “That was completely okay”, said Dumas. „It was extremely close, always fair and I had a lot of fun. Second place – we couldn’t have expected more today. We’ll do better again next time.“ Krognes, too, was not able to hide his bright smiles after the race. “I have tried to get myself into a good position but Romain kept on sticking to his racing line,” said the Norwegian who experienced a moment of shock in first hour of the race when another car hit him from behind whilst braking in front of an accident at the entrance to the Nordschleife. “I think the car behind me simply realized too late that I was braking”, he added. “First of all I thought the damage was worse but finally it was almost nothing.”

Behind the top three, Norbert Siedler and Frank Stippler in the fastest Frikadelli-Porsche finished in fourth place. The fastest Mercedes-AMG GT3 was driven by Stefan Schmickler and Kai Riemer for Landgraf Motorsport, they finished fifth and were the fastest Gentlemen vehicle in the GT3 class.

Exciting decision in the Porsche Carrera Cup class
The battle in the Porsche Carrera Cup class lasted until the very last lap. After four hours, Alexander Mies, Tim Scheerbarth and Steve Jans finally crossed the finish line in their nine eleven of the GIGASPEED Team GetSpeed Performance for the third time in a row as the winners. At the beginning of the last lap, the driver trio was still behind David Jahn and Marek Böckmann of the Team 75 Motorsport around Le-Mans winner Timo Bernhard. The Porsche with number 117, however, had to stop in the last lap and didn’t make it to the finish line. “That was really close today”, admitted Scheerbarth after the finish.

First KTM class winners: Ferdinand and Johannes Stuck
The first winners of the KTM X-BOW Cup powered by Michelin, which was organised for the first time this weekend at the fourth VLN race, are Ferdinand and Johannes Stuck. The two sons of racing legend and DMSB President Hans-Joachim Stuck took the chequered flag with an advantage of 4:26.812 minutes ahead of the second-placed Nils Jung and Florian Wolf. “An amazing race with an amazing car, fantastic weather and a huge crowd – what else could you want”, said Johannes Stuck. And Ferdinand Stuck was similarly enthusiastic: “It was just so much fun and you must congratulate KTM for the idea of introducing this Cup: Nowhere else do you get more power and fun for this amount of money. And I am moreover sure that we will still make it into the top twenty in one of the race to come throughout the year.”

Fischer / Konnerth / Zils defend their championship lead
With their fourth win in the fourth race, Norbert Fischer, Christian Konnerth and Daniel Zils of the Pixum Team Adrenalin Motorsport managed to defend their lead in the championship. Their Porsche Cayman once again set the standard in the class of VLN production cars up to 3,000 cc cylinder capacity.

After this fourth race of the season, the VLN endurance championship Nürburgring will take its summer break. The season highlight of this worldwide biggest grassroots series will then follow on 19th August with the ROWE 6h ADAC Ruhr-Pokal-Rennen.