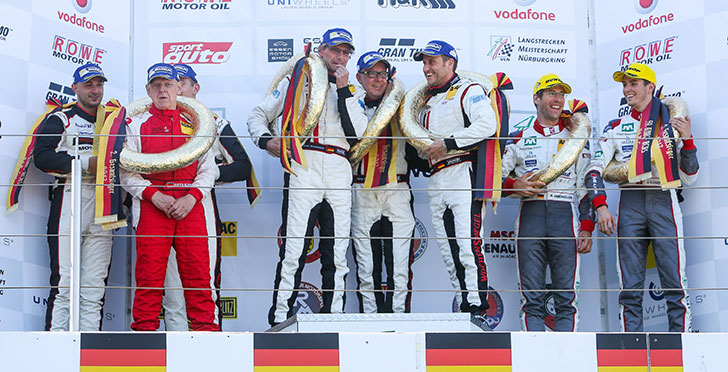 Two days after his 58th anniversary, Georg Weiss probably made himself the most beautiful gift: Together with Oliver Kainz and Jochen Krumbach, he celebrated the first VLN victory for the Ferrari 488 GT3 of the Wochenspiegel Team Monschau at the 59th ADAC ACAS H&R-Cup. After the race duration of 4:07:19,670 hours, team manager Weiss took the chequered flag as winner. The advance to the second-placed crew of Otto Klohs, Mathieu Jaminet and Lars Kern in the Porsche 911 GT3 R of Manthey-Racing was 52.755 seconds. Into third place finished Michael Ammermüller and Jeffrey Schmidt in the Audi R8 LMS of Montaplast by Land-Motorsport.

“At the beginning of my stint, I was not sure whether the gap to the Manthey-Porsche would be sufficient to secure our win”, Weiss admitted. “So I am now extremely happy that we finally made it for the first time after ten years with our team to score this victory. This is a big moment for me.” After many years with Porsche race cars, the 2017 season is the first year for WTM-Racing to compete with a Ferrari 488 GT3 in all VLN races. The Italian super sports car from the Maranello factory suits Weiss really well. “I have a big confidence in the car. And in addition to the good performance, we have an air conditioning system in the car which we use of course in the hot summer temperatures like today”, he adds with a smile.

The victory of the WTM-Ferrari was the second victory of a Ferrari in the history of the VLN endurance championship at the Nürburgring. The first one dates back to the 14th of May 2011 when the driver duo Marco Seefried and Jamie Melo Junior won the race in a Ferrari F458 entered by Farnbacher-Racing.

The Manthey trio was happy with their second position. “Unfortunately, we didn’t make it to win the Pro Am classification today for the third time in a row, but we are on the second step of the winners’ podium and that is absolutely fantastic”, said Klohs and Porsche test driver Kern added: “Otto completed eight laps in his stint and he delivered a really brilliant performance.”

Ammermüller and Schmidt made their debut in the Land-Audi at this third VLN round. “We could have finished in second place”, Ammermüller said. “But at the last pit stop, our engine didn’t start right away. To finish nevertheless in the top three is of course a superb result. If I get another chance to compete in the VLN with the Land-Audi, I will definitely accept with pleasure.”

Landgraf-Motorsport wins the gentlemen classification
Behind the top three, “Steve Smith“, “Randy Walls“ and Sven Müller in another Manthey-Porsche finished fourth. In the timed practice, Müller had secured pole position for the team with a time of 7:57.424 minutes and was leading the race throughout the first eight laps. Into fifth position finished the fastest car in the gentlemen classification, Stefan Schmickler and Kai Riemer in the Mercedes-AMG GT3 of Landgraf-Motorsport, with a gap of 4:14.737 minutes to the race winners.

Peter Posavac, Alex Lambertz and Claudia Hürtgen in the BMW Z4 GT3 of Walkenhorst Motorsport completed the top six. The Renault R.S.01 driven by Heiko Hammel, “Dieter Schmidtmann“ and Michele Di Martino was classified behind them in seventh position even though they had crossed the finish line in third place. Due to non-respect of flag signals, though, the team received a time penalty of 185 seconds imposed by Race Control after the race.

Decision in class V4 on the very last metres
The battle about the victory in the class of VLN production cars up to 2,500 cc capacity was absolutely exciting. After 4:05:22.365 hours race time, Christopher Rink, Danny Brink and Phillipp Leisen in the BMW 325i of the Pixum Team Adrenalin Motorsport finally had a slight advantage and finished with an advance of only 2.394 seconds ahead of Marcel Manheller and Hajo Müller entered by the MSC Adenau. Into positions three and four finished two Hofor-Racing teams: Bernd and Kevin Küpper were classified third in their class ahead of their team mates Rolf Derscheid, Michael Flehmer and Zoran Radulovic.

FEV-Racing celebrates a Seat victory in the TCR class
Benedikt Gentgen and Marcel Willert with their Seat Sport Leon TCR scored the first win for FEV-Racing in the new TCR class. After two victories in a row, Andreas Gülden, Benjamin Leuchter and Constantin Kletzer in the Volkswagen Golf GTI TCR of mathilda racing this time had to be satisfied with place three. In second place finished Matthias Wasel, Marcus Löhnert and Christian Schmitz in the Audi RS3 LMS of LMS Engineering.

New championship leaders: Fischer / Konnerth / Zils
The Pixum Team Adrenalin Motorsport had even several reasons to celebrate. With their third class win in V5, Norbert Fischer, Christian Konnerth and Daniel Zils moved into the championship lead. Thomas Jäger from Austria is shown in second position after having scored second place in the BMW M235i Racing Cup class. He achieved this result for the Team Scheid – Honert Motorsport together with Rudi Adams. The difference between Jäger in second championship position and the leader after three out of nine races is only 0.13 points. The top three are completed by Christopher Brück, who won class SP7 in the Porsche 911 GT of the GIGASPEED Team GetSpeed Performance, together with Frank Kräling and Marc Gindorf.

The fourth round of the VLN endurance championship Nürburgring, the 48th Adenauer ADAC Rundstrecken-Trophy, will take place on 8 July. The race organised by the MSC Adenau will run over the traditional distance of four hours.