Lena Strycek – the quickest woman of the year in an interview 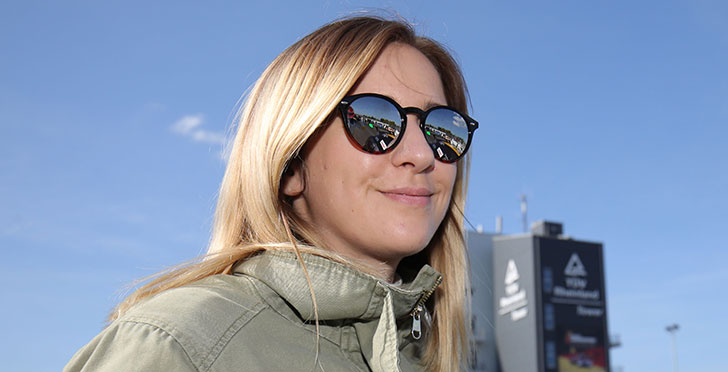 She is 26 years young and she has inherited from her father the motorsport genes: Lena Strycek. She studies motorsport management and lives her passion when she is sitting in the cockpit of her race car – so far normally an Opel. After participating in the GLP and the RCN – she won the junior classification in the RCN and the Ladies Trophy twice in a row – she started to compete in the VLN end of the year 2014 for the first time. In the past two years, she was at the start of each VLN round in an Opel Astra OPC Cup and in the year 2016 in a very particular line-up. Lena was chasing for fast lap times at the Nordschleife together with her brother Robin and her father Volker – the ‘family car’ convinced in every respect. After four victories and three second places in the Cup1 class, Lena Strycek scored more points than any other woman in the VLN season 2016. In an interview, she looks back onto her so far most successful year in motorsport.

Lena, your father wrote in a blog that, before the start of the season, he was as nervous as he was in the year 1984 when he was about to win the DTM title. Was the situation similarly emotional for you?
Lena Strycek: “Definitively. It is of course outstanding if you share your cockpit with your brother and your father. You are a family, but team mates at the same time. Anyway, the relationship within our family is already very harmonious and that was of course also good for our cooperation as a team. As we know each other very well, it is much easier to communicate your ideas or to understand each other. This car is very special for us in all respects. We have prepared it jointly, we had a great commitment to the project and simply learned to love it. If you then compete as a team, celebrate class wins and have such a lot of fun – this is just amazing!”

You were not competing in the Cup classification but you nevertheless finished the season as the best woman of the year. What does this achievement signify for you? Or do you prefer to abstain from the differentiation man / woman?
“I was not even aware of this for a long time, so I was particularly happy when I found out about it – really cool. That was however not our target. We just wanted to complete a clean season and finish all the races, if possible. That our team now finally finished in 20th position in the VLN Championship and that I am the most successful women, this is the icing on the cake – the absolutely greatest hit! All in all, this women-man comparison can nevertheless be quite annoying sometimes. If you are sitting in your race car with your overall and the helmet, nobody would see if this is a female or a male driver. You must anyhow push hard, you must be courageous and have passion and cleverness in order to be quick. That’s all that counts and has nothing to do with your gender.”

You have already demonstrated several times that you are very quick. Was the season 2016 a clean one in your view?
“It was an extremely clean one as we have concluded the season with a result that goes far beyond our expectations even though we couldn’t start in VLN race 6 due to the turbocharger damage in the qualifying. At this point, a big thank you for the engagement of all our friends in the team.”

In which order does the family actually start at the Nordschleife?
“As you know, my daddy is a double starter as he regularly competes in the Manta, too, and he is the start driver in this car. So normally, Robin completed the first stint in our car, I did the middle turn and daddy the final stint.”

Who is the fastest of you in the family car?
“That’s still daddy. But Robin and I get closer and closer to him and we try our best to beat him shortly.”

And what are your plans for next year?
„For the moment, everything is possible. We would like to compete in the VLN once again in a similar constellation. Yet, my brother and I are very busy with our studies but it would nevertheless be great if we could do it again.”