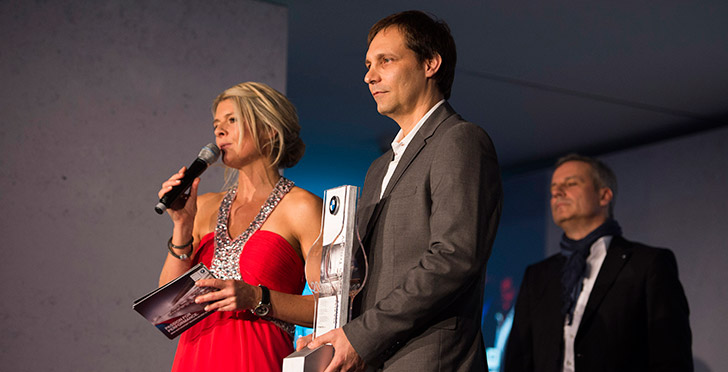 They have done it again! After 2014, the Team Pixum Adrenalin Motorsport again received the trophy for the most successful privateer team of the manufacturer in the 54th BMW Sports Trophy. A really big success for Matthias Unger who is the manager of the team based at Heusenstamm and who made himself available to answer a few questions about the award, the past year and the new season.

This was the second time in a row that you and your team received the prize as best privateer team worldwide in the BMW Sports Trophy. What does this award mean to you?
Matthias Unger: A lot. This is finally the highest award that you can receive as BMW team. I have not yet fully realized it, though. Actually, I do not have the feeling now to be the best in the world. The points system is very special and it is not our main objective to always score maximum points. We rather try to make the best of each race with good drivers, good cars, good material and a good strategy. And those who have collected the greatest number of points in the end will receive this fantastic award – and we made it twice now.

How many cars did you use in the year 2015 and what is your formula for success?
Our advantage is that we have very strong drivers in all cockpits, that we compete in different classes in the VLN and in the RCN and that in general we mostly finish on the podium. I have always entered at least five and most times even six cars – two Z4, one 325i and three M235i – in the VLN. In addition, we started at the 24h Qualification Race and the 24h Race. I deliberately compete only at the Nürburgring. For me, the Nordschleife is the race track which represents a challenge par excellence and provides the highest degree of driving pleasure. I am not that much excited about other circuits. Grand Prix Circuits ultimately are always the same whilst the Nordschleife every time represents a new challenge, also due to the Eifel weather. This is what my drivers mainly think, too. It is amongst others exactly because we are competing at the Nürburgring where we always have the chance to win that they are on board.

Apart from all the pleasure about the award, are you not a little disappointed for not having gained also the title in the VLN?
For some reason, we simply didn’t make it so far. There has always been someone who was more consistent in scoring points and had that little more bit of luck as well. The great thing indeed is that the BMW Sports Trophy always takes place right at the end of the year. Even if we have not succeed in winning the Cup or the VLN Championship in the end which, of course, is our main target for the season, there is still this conciliatory finishing touch. The trophy is a great thing that gives you an additional motivation.

Six of your drivers are amongst the best 24 BMW private drivers worldwide, Christian Büllesback is on top in this ranking. What distinguishes him from the others?
We would never have expected to have six drivers in these top 24. That is a true sensation. Christian is the model privateer who successfully puts a lot of efforts in finding sponsors to support him. He has achieved this with a unique commitment, formerly he came to the tracks as spectator, then as marshal and later as mechanic in various teams. So he has worked his way up with great ambition. He is a very good driver who is keeping his feet on the ground and has an excellent pace but his first priority always is to finish the race. His slogan in racing is “To finish first you have to finish first“, and this has paid off for him.

As far as you are concerned, you are not competing any more. How difficult is it for you to stand beside the track?
I was still competing in the season 2014. Then I realized that this is difficult to combine with the role as team manager of five or six cars. You are not able to concentrate fully onto one issue. I was getting into the car but up to that moment, all of my thoughts had still been with the mechanics. And whilst I was racing on the track, we still discussed some matters on the radio. Thereafter it was the turn of the mechanics again. That was not satisfying at all. I am the head of all, I am managing everything and train my drivers. Originally, I wanted to continue driving still in 2015 but then I decided not to do so. I also realized that I am as proud of my drivers and that I am as happy about their successes as if I myself had been behind the steering wheel. Before the races, I am as excited as my drivers and share this excitement with them over the complete race. That is most satisfactorily for me and I don’t miss anything at all. I have good and nice drivers and our cooperation is really great.

What about next season? How many and which cars will you enter?
It will basically be the same as in 2015. I have four BMW Cup cars. At least three of those shall always be at the start. In total, I would like to have always six cars on the grid. In addition, there will be a Porsche Cayman in class V5. I bought this car because the Z4 simply is no longer that competitive in this class. Any I want to supply my drivers with a car that is effectively able to win. So we are trying it with the Porsche.

What is the situation regarding the drivers? It should be easy for you to get enough drivers. Have they not queued up yet?
Last year already as „best BMW privateer team” we got more requests and the number of free places is continuously decreasing. The Pixum Team Adrenalin Motorsport stands for good cars, good material and good service. Most of my regular drivers have already extended their agreement for next season. I am in a very good situation, a few places are nevertheless still free and I would be happy about one or another additional support.