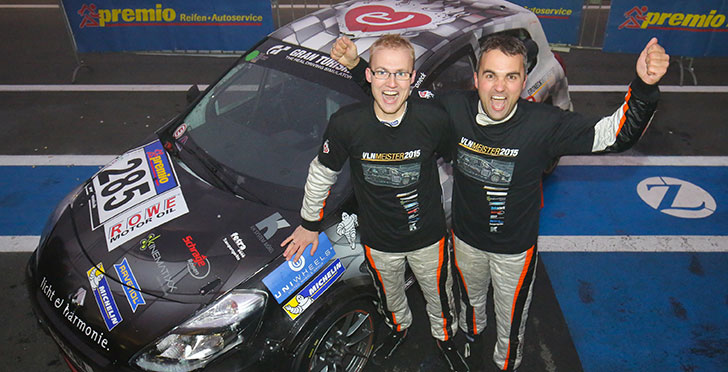 The finale in the VLN endurance racing championship Nürburgring could not have been more exciting. In a thrilling race, Dirk and Tim Groneck secured their second title after 2013 in the VLN endurance racing championship Nürburgring. “That is absolutely awesome”, said the brothers who were overwhelmed with joy. “We’ve had a great season and gave everything until the end. To become champions for the second time in this fantastic series makes us really proud.” There was not only a hot fight about the championship, the overall victory at the 40th DMB Münsterlandpokal, too, was very much contested up to the end and came out with a big surprise. Manuel Metzger, Philipp Eng and ‚Gerwin’ in the Porsche 911 GT3 Cup of the Black Falcon Team TMD Friction celebrated the first win of an SP7 vehicle since 29th of August 2009. The trio took the chequered flag after 17 laps with an advance of 1:55.852 minutes ahead of the second-placed SCG003C of the Scuderia Cameron Glickenhaus. The American-Italian crew around team owner James Glickenhaus took the first result on the podium for the spectacular small series sports car which was driven by Manuel Lauck, Franck Mailleux and Jeroen Bleekemolen. Third place also went to an SP7 Porsche. The team of Frikadelli Racing was represented on the podium by its drivers Frank Kräling and Christopher Brück. A 30 minutes summary of the VLN final round will be shown in channel Sport 1 on 7th of November at 11:30h.

“This is something you will never get used to”, said Tim Groneck. “It is an incredible moment. Our second title definitely has the same significance for as the first one.” The initial situation before the finale: Stefan van Campenhoudt was first in the championship with the very narrow lead of 0.07 points. Due to the sophisticated formula providing a maximum of fairness in the endurance racing series since its beginning, it was clear before the finale that the Groneck brothers would win the title if they finished in a better or equal position within the top three of their class than van Campenhoudt. The Belgian finally did not finished any better than second position and the rest is history as from today. Amongst the first congratulators were Rolf Derscheid and Michael Flehmer who won the championship last year and know that it is now in good hands. The duo performed well again this year and finished the championship seventh overall in the end.

The start to the 40th DMV Münsterlandpokal was delayed due to fog and very bad visibility. The start signal was finally given at 13:50h and the race distance was shortened to three hours. When the fog became worse again eleven minutes before the race end, Race Control decided to stop the race with the red flag. As more than 160 minutes had been completed at the moment the race was suspended, full points were awarded.

Jesse Krohn and Victor Bouveng in the BMW Z4 GT3 of the Team Walkenhorst Motorsport powered by Dunlop clinched pole position in the timed practice. The duo finished the race in sixth place. The greatest number of laps in the lead was completed by Dennis and Marc Busch in their Audi R8 LMS ultra. After 15 laps, the brothers came to a scheduled pit stop whilst the race was stopped and thus found themselves at disadvantage. They finally finished in the unlucky fourth place ahead of the Wochenspiegel Team Manthey.

“Initially, we thought we were second. Even a second or third place would have been a sensation for us”, said Metzer who celebrated his second VLN win in a row. “The suspension of the race does not at all spoil our joy, sometimes it is also that little bit of luck that you also need. Our car was extremely fast today. The tyre choice was perfect as was our set-up for this weather. I am particularly delighted for Gerwin. Last year, he was still competing in series cars. We had completed a comprehensive training programme and he was able to successfully apply this in praxis.” The second-placed, too, benefited from the stopping of the race. “Right before the red flag came out, we had some problems with the fuel pump”, said Jeroen Bleekemolen who made his debut in the team Glickenhaus. “We went out on the track again but I was already almost on the way home. Anyhow, we still had a good speed. I visited the workshop in December and there was still plenty of work to be done. Meanwhile the vehicles have become genuine race cars.”

Apart from the decision in the championship, the winners in the other classifications are now also known. For can Campenhoudt, the first place in the VLN Production Car Trophy should be a small comfort for his missed championship title. The VLN Speed Trophy will go to the Walkenhorst BMW with start number 36 whilst Arne Hoffmeister and Fabian Wrabetz had already scored an early win in the TMG GT86 Cup. New champions in the Opel Astra OPC Cup are Daniel Bohr from Luxembourg and his two Finnish team mates Juha Hannonen and Jari Jari Nuoramo. The trio convinced in particular with their constant performances and won the title in the end without scoring any class win. The results in class V6 (protest) and in Cup5 (post-event scrutineering) are suspended. So the winners in the VLN Junior Trophy and in the BMW M235i Cup remain to be declared.

The next event which no VLN participant or fan should miss is the Essen Motor Show to take place from 27th November to 6th December. The unique racing series at the Nordschleife will be presented in Hall 6. The visitors will be able to see a number of VLN race cars, amongst those the current championship car, and they will be provided with all kind of useful information on the new season 2016.