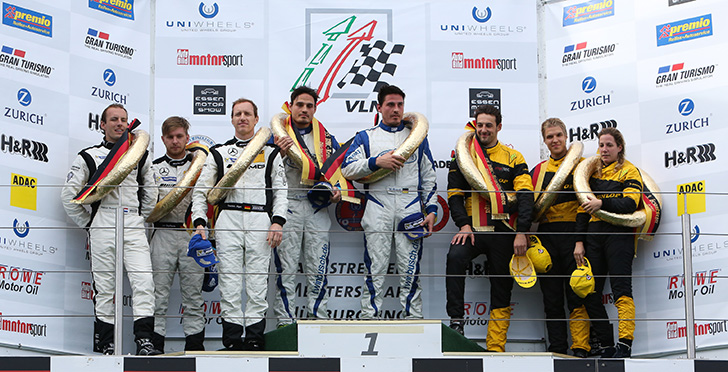 The fight for the win at the eighth round of the VLN endurance racing championship Nürburgring was decided on the very last metres. Four laps before the race finish, the top three cars were separated by less than two seconds before the events came thick and fast. After a fascinating showdown, Dennis and Marc Busch celebrated their second VLN win in a privately entered Audi R8 LMS ultra. The brothers from Bensheim/ Germany were able to refrain from a final attack as the Mercedes-AMG test team with so far race leaders Thomas Jäger, Jan Seyffarth and Yelmer Buurman received a time penalty for speeding in their brand new Mercedes-AMG GT3. Into third place finished the Team Walkenhorst Motorsport powered by Dunlop. Michela Cerruti, Jesse Krohn and Felipe Fernándes Laser in the BMW Z4 GT3 celebrated their third result on the podium in the current season. In brilliant weather around the Nürburgring on the German Unity Day, already the timed practice in the morning could hardly be topped in terms of tension. The top ten teams were separated by not more than 6.497 seconds. With a time of 8:01.881 minutes, Jäger in the AMG GT3 furthermore scored a new fastest lap time of the year. All the younger and older spectators were enthusiastic about the popular mouse of TV channel WDR (West German broadcasting station) that attended the event as part of the “Door Opener Day”. In cooperation with the Nürburgring, the VLN granted 15 enthusiastic children a look behind the scenes of the race event and track. A 30 minutes summary of the race will be shown in channel Sport 1 on 10th of October.

“Our second victory, finally”, said Marc Busch. “We are currently well positioned and everything is running like clockwork in our team.” His brother Dennis added: “After sixth and third positions respectively at the two previous races, we have topped it off now.” In addition to their top speed – in a superior manner, the two privateer left a number of well-known sports car professional drivers behind – it was also the strategy that was a key factor for their success. “We advanced our first pit stop because we were stuck in the traffic”, explained Marc Busch. “We had a clear track afterwards and were able to set fast lap times.” Even though they were so close to a victory, the disappointment of Jäger was not that high considering the fantastic success. “We have gained second place and not lost first one”, said the driver who lives in Munich. “The qualifying already was running perfectly for us – the lap times were top and we were absolutely at our limits.” The development that the forerunner model SLS AMG GT3 had undergone during the past five year was completely integrated into the new GT3 race car of Mercedes-AMG. “We are close to the optimum performance”, said Jäger. The Walkenhorst trio into third overall position was happy with their result. Laser nevertheless expressed their readiness to further attack: “We are happy to be on the podium again. This was almost the maximum we can achieve with the Z4. For long sections, I took the AMG GT as orientation and tried to keep up with its performance. I succeeded in doing so, so our pace is all right. There are two more races on the calendar and we are definitely aiming at another victory.”

Behind the top three, Uwe Alzen and Mike Stursberg in the Mercedes-Benz SLS AMG GT3 finished in fourth place, followed by Sabine Schmitz, Klaus Abbelen and Patrick Huisman in the Porsche 911 GT3 R of Frikadelli-Racing. The driver trio in the SLS AMG GT3 of Car Collection, Kenneth Heyer, Lance David Arnold and Tim Scheerbarth, became sixth overall. Georg Weiss, Jochen Krumbach and Oliver Kainz in the Porsche 911 GT3 RSR of Wochenspiegel Team Manthey took the chequered flag in seventh position which was a respectable result for businessman Weiss from Monschau/ Germany at his 100th race participation in the VLN endurance racing championship.

In addition to the battle about the overall victory, the competition in several classes was likewise very tight. After they had won the Porsche-Cup class in all of the five last races, the series of victories ended for Marc Hennerici and Christian Menzel at this eighth VLN race. The driver duo of raceunion Teichmann Racing crossed the Line to start the last race lap only a few thousands of a second behind Adam Osieka and Steve Jans of GetSpeed Performance. However, in this last lap over the 24.358 kilometres long track combination of the Nürburgring short version and Nordschleife, they lost 27.660 seconds to their rivals. Class V6 saw a true photo finish. Claudius Karch and Ivan Jacoma in the Porsche Cayman S of Mathol-Racing finished with an advance of only 0,585 seconds ahead of the second-placed Yannick Fübrich and Stein Tveten in the Porsche 911 of aesthetic racing.

With their seventh class win, Dirk and Tim Groneck in their Renault Clio defended the lead in the championship. Due to the lower number of competitors in SP3 and in consideration that the greatest number of championship points are awarded in the class with the highest numbers of competitors, their advance ahead of Stefan van Campenhoudt in the BMW 325i of Team Schirmer has however decreased. The Belgian celebrated his sixth class victory. As there are normally more competitors in class V4, his chances to finally win the championship are quite high as only the nine best results achieved in the season comprising ten races will finally count.

The ninth round of the VLN endurance racing championship Nürburgring, the ROWE DMV 250-Miles Race, will already take place in two weeks’ time, on 17th of October. The race will run over the traditional duration of four hours.