A holiday for all motorsport fans 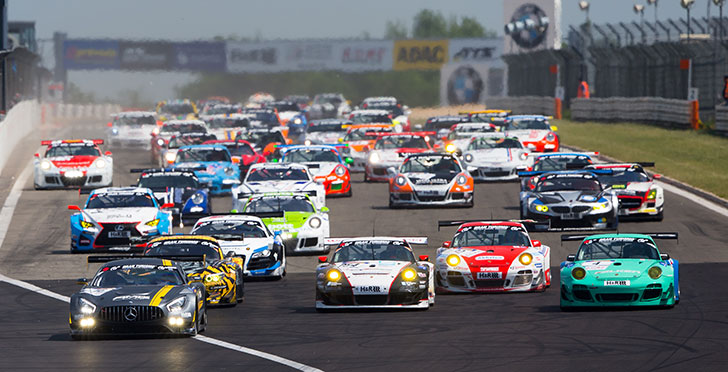 One highlight is currently followed by another at the Nürburgring. After the thrilling action at the 6h Race and at the DTM weekend, the motorsport fans may now look forward to the 55th ADAC Reinoldus Langstreckenrennen. This eighth round of the VLN endurance racing championship will be a holiday on a public holiday for all the visitors. The 3rd of October is the 25th anniversary of German reunification and the VLN will come up on that day with an adequate presentation. Hardly ever in the season 2015 had there been such top-class race cars with such a number of well-known drivers on the starting grid. With so much glamour at the weekend, it seems that the weather gods will be smiling, too. Weather forecast announces some pleasant 18 degrees with sunshine and the rain probability is zero percent. When the engines in the Porsche, Bentley, Mercedes-Benz, BMW, Audi, Opel, Toyota, Lexus and in the cars of many other manufacturers will be started in the Eifel, an “electrifying” racing atmosphere will prevail around the 24.358 kilometres long Nordschleife. The eighth VLN race of the year constitutes the colourful opening of some golden autumn days at the most beautiful and longest race track of the world which no motorsport enthusiast should miss. The participants will enter the season finish line as there will be only two more races on the calendar, scheduled for 17th and 31st of October, before the trophies will be awarded.

At the last but third race date of the year, some brilliant personalities, in particular in the powerful classes, will honour the visitors with their presence. The Bentley Continental GT3 will for example again head into the adventure ‘Green Hell’. The British race car attracted a lot of attention already at the first classified VLN race on 25th April when the team finished fourth overall in a top-class field. A little more than six and a half months later, Steven Kane and Guy Smith from Great Britian wish to join the fight for the overall victory on 3rd October. They will hereby have to fight against the winners of the recent 6h race. Hubert Haupt, Abdulaziz Al Faisal, Adam Christodoulou and Manuel Metzger in the Mercedes-Benz SLS AMG of Black Falcon will do their best to repeat their success achieved at the seventh VLN race.

The Mercedes-AMG GT3 made its initially successful world debut on 4th of July. The car was for the first time officially participating in a race at the third round of the VLN series and gained pole position right away. In the race, however, the pole setter was slowed down due to a technical failure which prevented the team from scoring a top result. Thomas Jäger, Jan Seyffarth and Yelmer Buurman are now hoping not to experience any such problems again when they will chase around the Nordschleife at their second test for the new GT3 race car. The same applies for another make from the Stuttgart manufacturer, hoping to have a chance to win the race on 3rd October. The Team Car Collection will take part with a completely new driver trio in the cockpit of the Mercedes-AMG SLS GT3: Kenneth Heyer, son of racing legend Hans Heyer, Lance David Arnold, a true GT3 all-rounder, and Tim Scheerbarth, VLN champion in 2011, have sufficiently demonstrated their abilities in many racing series and in many different makes. These are three top drivers who are definitely good for a win. Arnold: “We should in any case be able to make it up on the podium. And in saying so, you would normally have an eye on the top position.”

Philipp Eng in the Porsche Carrera-Cup Germany was this year actually hoping in each race to gain the top position on the winners’ podium. And the hope was fulfilled. The Austrian scored eight victories in 15 races and became the Champion already four races before the end of the season. He was the first driver ever to succeed in defending the title in this competitive single-make cup. But Eng is still far from already having enough. The Champion now also wants to experience it at the Nordschleife. He shares the cockpit of the Black-Falcon-Porsche 911 GT3 Cup in class SP7 with ‚Gerwin’. Connor de Philippi just as Matteo Cairoli are some of Eng’s rivals. On some occasions, the Porsche Juniors put the classification of those drivers experienced in the Carrera Cup partly upside down. At the eighth round, they will both take up the challenge at the ‘Green Hell’ again in class SP7. Together with Michael Christensen and Christoph Breuer, Cairoli will drive the Porsche 911 GT3 Cup MR of Manthey Racing, de Philippi will start in the Frikadelli Porsche 911 GT Cup America together with Frank Kräling.

When the timed practice of the eighth VLN race will begin at 08h30 in the morning of the German Unity Day, the crews of more than 15 cars hope to have a chance to win the overall classification. In addition to the aforementioned candidates for the title, the Frikadelli Porsche GT3 R (Schmitz/ Abbelen/ Huismann), the Walkenhorst BMW Z4 GT3 (Cerruti/ Krohn/ Laser), the Falken Porsche 911 GT3 R (Dumbreck/ Ragginger), the two Audi R8 LMS ultra of the Busch brothers and Phoenix-Racing as well as the recently developed Lexus RC F GT3 with the teams Farnbacher/ Yoshimoto and Oestreich/ Frey/ Tresson must certainly be considered as favourites. An exciting fight about the race win will begin when the start signal at the Nürburgring will be given at 12 o’clock. A highlight for every motorsport fan – a holiday on a public holiday.