Who will be half-time VLN champion 2015? 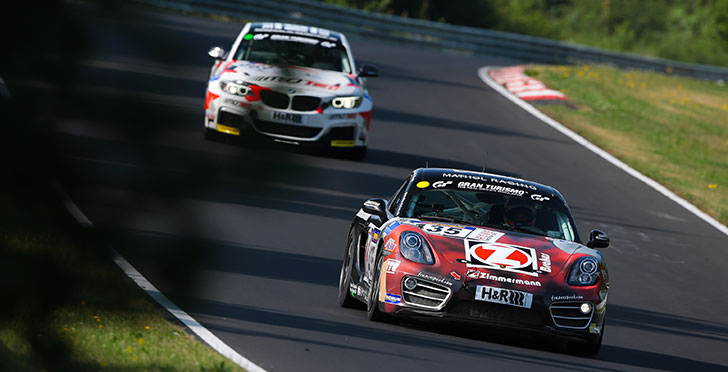 After the break of more than one month at the Nürburgring, the competition will be resumed shortly. The VLN drivers will restart the racy adventure ‘Green Hell’ on Saturday 1st August. Hot position fights will be going on in the 25 classes in order to score top results at the most beautiful race track of the world. The 47th ADAC Barbarossapreis organised by the MSC Sinzig will take place as fifth round of the VLN endurance racing championship Nürburgring and this is where the top-class drivers will show what stuff they are made of. Who will take the unofficial title as ‘half-time champion’? The answer will be given by the drivers in the four hour race at the 24.358 kilometres long Nordschleife. The hottest favourites are driving in Renault Clio, in Porsche Cayman S and in Toyota GT 86 – this being just one indication that reflects the wide range of makes in the VLN. To remember that not only the most powerful race cars in the VLN have a chance to win the title in the endurance racing championship. Another positive factor of the series is that again and again, true heroes in motorsport give a sample of their skills.

And they will not always perform in the most powerful cars, so as for example Nick Tandy from Great Britain who, recently in June, celebrated the victory at the prestigious Le Mans 24h Race in a Porsche 919 Hybrid together with Nico Hülkenberg and Earl Bamber. On 1st August, Tandy will start in a Porsche 911 GT3 Cup MR (Manthey Racing) in class SP7. A vehicle that is not at all without any chances but that is more a candidate for lower positions on the podium, rather than for winning the race. Tandy, who will make his debut in the VLN 2015, will share the cockpit with Christoph Breuer. In contrast to the British driver, Breuer who lives in Nettersheim/Germany is at home in the VLN and completed his first laps in the VLN series in 2006 already, being part of the first VLN junior team. It will be interesting to see whether the driver duo will also be involved in the fight for the race victory, in addition to the battle about the class win.

Speaking of class wins, three teams are currently dominating the season. Tim and Dirk Groneck (both from Melle/ Germany) have so far won their class SP3 in all the VLN rounds with their Renault Clio (Ravenol Team) and they are thus in the lead of the VLN overall classification. Their rivals Claudius Karch (Mannheim/ Germany) and Ivan Jacoma (Switzerland) in a Porsche Cayman S (Mathol Racing) in class V6 as well as Arne Hoffmeister (Niederdorfelden/ Germany) and Fabian Wrabetz (Bad Soden/ Germany) in a Toyota GT 86 (Dörr Motorsport) in class Cup4, however, come up with the same result. Before this fifth round, all of the three teams have finished in top positions in their respective strong classes and are thus the most promising candidates to gain the title ‘half-time champion’. It is not surprising that the Groneck brothers are part of this group. They both have already taken the VLN title in 2013 and know their race car and the ‘Green Hell’ perfectly. For Arne Hoffmeister, currently third overall, the overall classification for now is only a nice secondary result: “It is of course interesting and very nice to be part of the leading group in the VLN overall classification. But it is still too early in the season and there are classes which figure greater numbers of starters. It is only that the top drivers in these classes have not yet been able to score points as consistently as we did. Our focus, however, will primarily remain on the overall classification in the TMG GT86 Cup.”

Uwe Alzen will be entering new territory on Saturday. The race driver from Betzdorf/ Germany of course knows the Nordschleife very well, also considering that he has already celebrated many legendary successes there and that he was holding the lap record for a long time. At the fifth VLN race, however, he will for the first time drive a Ford after having gained experience with Porsche and BMW. Together with Dominik Schwager (Munich), he will share the cockpit of the Ford GT of his brother Jürgen in class SPX. The victory at the VLN season final last year demonstrates that this car entered by ‘H&R Spezialfedern’ is good for a race win. With the brothers Dennis and Marc Busch (Bensheim/ Germany), another driver team, though, is aiming at the race win. They will have their first start with the Audi R8 LMS Ultra in class GT3 in the current season and they can rely on the support of a true expert in long distance racing, Marc Basseng (Rosenbach/ Germany). His record speaks for itself. The 36 years old driver has already been on top of the VLN podium 26 times and his prospects to add another top position at the Barbarossapreis are really bright.

Amongst others, the teams of ‘Frikadelli Racing’ and ‘Walkenhorst Motorsport’ will definitely try to spoil this target. In particular the latter have certainly developed a taste for victories after their first VLN win scored with drivers Michela Cerruti (Italy), Jesse Krohn (Norway) and Felipe Fernándes Laser (Leipzig/ German) in their BMW Z4 GT3 at the previous VLN race: “We will attack again. The team is highly motivated and the cars are perfectly prepared”, says team manager Henry Walkenhorst (Melle/ Germany). “It is our target to finish again in a top position. You will never forget this feeling of taking up the position on top of the podium once you have experienced it.” A clear declaration which is part of the standard repertoire of Klaus Abbelen, Sabine Schmitz (both from Barweiler/ Germany) and Patrick Huismann (Netherlands) driving the Frikadelli-Porsche 911 GT3 R.

It is difficult to predict who will be the winners finally on 1st August. The level of performance in the VLN is extremely dense and the unique track of the Nürburgring occasionally gives hard times also to the most experienced drivers. At the end of the race over four hours, we will know who will be able to celebrate the victory on top of the podium and gain the unofficial title ‘half-time champion’.